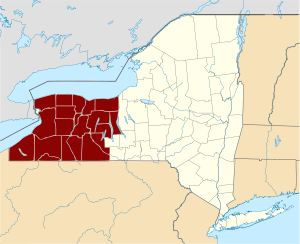 The burned-over district refers to the western and central regions of New York in the early 19th century, where religious revivals and the formation of new religious movements of the Second Great Awakening took place.[1]

The term was coined by Charles Grandison Finney, who in his 1876 book Autobiography of Charles G. Finney, referred to a "burnt district" to denote an area in central and western New York State during the Second Great Awakening. He felt that the area had been so heavily evangelized as to have no "fuel" (unconverted population) left over to "burn" (convert).

In references where the religious revival is related to reform movements of the period, such as abolition, women's rights, and utopian social experiments, the region is expanded to include those areas of central New York that were important to these movements. The historical study of the phenomena began with Whitney R. Cross, in 1951.[2][3] However, Linda K. Pritchard uses statistical data to show that compared to the rest of New York State, the Ohio River Valley in the lower Midwest, and indeed the country as a whole, the religiosity of the Burned-over District was typical rather than exceptional.[4]

Religion in the district

Western New York was still a frontier during the early Erie Canal boom, and professional and established clergy were scarce. Many of the self-taught people were susceptible to enthusiasms of folk religion. Evangelists achieved many converts to Protestant sects, such as Congregationalists, Baptists and Methodists. Converts in nonconformist sects became part of numerous innovative religious movements, all founded by laypeople during the early 19th century. These include:

In addition to religious activity, the region including the burned-over district was noted for social radicalism. Elizabeth Cady Stanton, the early feminist, was a resident of Seneca Falls in central New York. She and others in the community organized the Seneca Falls Convention devoted to women's suffrage and rights.

The larger region was the main source of converts to the Fourierist utopian socialist movement. The Skaneateles Community in central New York was such an experiment. The Oneida Society, likewise in central New York, was also considered a utopian group. Related to radical reform, upstate New York provided many members of Hunter Patriots, some of whom volunteered to invade Canada during the Patriot War.

The area also produced innovative religious movements that were founded by clergy, such as the Social Gospel, a primary leader of which was Walter Rauschenbusch of Rochester.

The district can be broadly described as the area in New York State between the Finger Lakes and Lake Erie[5] and contains the following counties: