Burnet Rhett Maybank (March 7, 1899 – September 1, 1954) was a U.S. Senator, the 99th Governor of South Carolina, and Mayor of Charleston, South Carolina. He is one of only twenty people in United States history to have been elected mayor, governor, and United States senator. Maybank was the direct descendant of five former South Carolina governors: Thomas Smith, Rawlins Lowndes, Robert Gibbes, James Moore and William Aiken, Jr. and one U.S. Senator, Robert Barnwell Rhett. He was the first governor from Charleston since the Civil War. His son, Burnet R. Maybank Jr., went on to become lieutenant governor of South Carolina and a later candidate for governor. His grandson, Burnet Maybank III, is a notable lawyer.

Burnet Maybank was born to Dr. Joseph Maybank VI and Harriet Lowndes Rhett, the first of ten. He married Elizabeth deRosset Myers, daughter of Judge Francis Kerchner Myers and Roberta Atkinson Smith, on June 28, 1923. They had three children. After the death of his first wife Maybank married Mary Roscoe Randolph Pelzer Cecil. The second marriage produced no children. He has 10 grandchildren and many great-grandchildren.

Born in Charleston, South Carolina, into one of the city's most prominent and wealthy families, with ancestors who were planters, with five who served as governors of the state, Maybank graduated from the Porter Military Academy, now the exclusive Porter-Gaud School. He earned a degree from the College of Charleston. He served in the United States Navy during World War I.

Maybank established himself in business as a successful merchant in the cotton export business from 1920 to 1938.

He became interested in politics and public service. A lifelong Democrat, Maybank entered politics for the first time in 1927, when he was elected to a four-year term as alderman in Charleston. He rose to mayor pro tempore in 1930. He was elected mayor of Charleston in 1931, serving until 1938. As mayor, Maybank balanced the budget during the Great Depression. He refused an increase of his own salary to $6,000 from $3,600,[1][2] and reduced local taxes. But, he gained federal financing under President Franklin D. Roosevelt's administration for slum clearance, construction of public housing and other infrastructure, and support for unemployment payments. He was effective in guiding work relief and funds for civic improvements. He used a Works Progress Administration (WPA) grant to restore the historic Dock Street Theatre, and other grants went to such infrastructure improvements as the city docks and a city incinerator.

During this period Maybank was also appointed as a member of the State Board of Bank Control (1932–1933) and was chairman of the South Carolina Public Service Authority (1935–1939).[1] It supervised a state-sponsored power project on the Santee River. This project, known as the "little TVA," was built to control floods as well as provide hydroelectric power for the state. Maybank was a conservative supporter of President Roosevelt's New Deal, which funded public works and job programs. But he opposed a share of the president's labor policies. 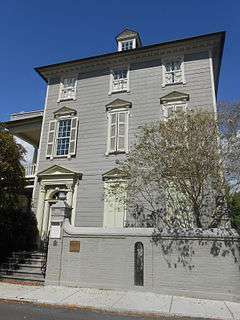 Then-Senator Maybank sold the historic Col. John Stuart House in 1950, saying, "I merely sold my large house because it is not fair for one of Charleston's oldest homes to be closed up 11 months during the year."[3]

In addition, he was appointed by the governor as a member of the South Carolina State Advisory Board of the federal Public Works Administration from 1933 to 1934.

With the favorable publicity from the Santee project, a strong political base in Charleston, and support from his mentor, U.S. Senator James F. Byrnes, Maybank was elected as governor in 1938.[4] As governor, Maybank tried unsuccessfully to create an adequate state police force, but he did supervise a vigorous prosecution of the criminal element in the state. He strictly enforced liquor and gambling statutes.[5] Maybank personally interceded to prevent to destruction of a high wall around the historic jail in Charleston when it became threatened by a housing project expansion.[6]

He fought the Ku Klux Klan, which had reached its peak of revival in the 1920s but was still active. Maybank expanded economic opportunities for blacks in the racially segregated society and tried to improve the quality of black schools in the state, which were historically underfunded. He did nothing to alter the disfranchisement of blacks due to provisions in the state constitution and electoral laws since the turn of the twentieth century.

In January 1941 President Roosevelt appointed Byrnes to the U.S. Supreme Court. Maybank won a special election to fill Byrnes's US Senate seat in September 1941, defeating former governor Olin D. Johnston with 56.6 percent of the vote.[7] In 1942 Maybank was elected to the full six-year term, and in 1948 he was reelected without opposition, and served until his death in 1954.

Maybank was a powerful senator, part of the southern Democratic block. Maybank served as chairman of the Committee on Banking and Currency and as co-chairman of the Joint Committee on Defense Production. As chair of the Subcommittee on Independent Offices, under the Appropriations Committee, Maybank provided critical support to continue the U.S. nuclear weapons program in the early 1950s.

He introduced the "Maybank Amendment," which was tacked onto the 1953 Defense Appropriations Bill. The amendment relieved the Department of Defense from federal legislation to target a percentage of its expenditures to high unemployment areas.[8] Shortly before his death, Maybank was voted as one of the "20 Most Influential Americans" by Fortune Magazine.

Bertie Bowman, who became a hearing coordinator for the Senate Foreign Relations Committee, published his memoir, Step by Step: A Memoir of Hope, Friendship, Perseverance, and Living the American Dream, in 2009. He noted the personal support he had received from Senator Maybank. A poor black farmer's son, he went to Washington from South Carolina in 1944 as a runaway at age 14 and went to Senator Maybank. He got the youth a janitor's position, and took a personal interest in Bowman (who then had no family in Washington). Gradually the young black man advanced while working for the Senate, as he describes in his memoir. In March 2009 Senator Maybank's granddaughter, Elizabeth Parker, traveled to D.C. to meet with Bowman for the first time. A month later, more of the Maybank family met Bowman and his wife, Elaine, in Charleston.

Vice President Joe Biden mentioned Maybank at the dedication ceremony for the Ernest Hollings Special Collections Library at the University of South Carolina on July 23, 2010. He said,

"You know, an old governor of yours, Burnet Maybank, once wrote an essay entitled, 'Who Is the South Carolinian?' And here's what it said. He said, there's a deal—there is a deal of kindness about him, describing the South Carolinian. He feels favored when asked for personal assistance. A neighborly spirit prompts him to render service with a scorn for remuneration."[14]