James Hopkins Adams (March 15, 1812 – July 13, 1861) was an American politician from South Carolina. He served in the South Carolina Legislature and was the 66th governor of the state. 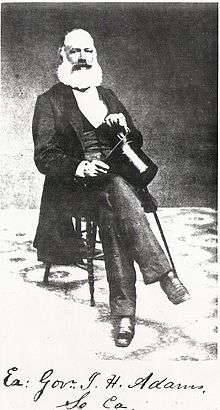 Adams was born in Minervaville, South Carolina, in 1812 to Henry Walker Adams and Mary Goodwyn Adams.[1] Both of his parents had died by the time James was three years old, and therefore he was raised by his grandfather, Joel Adams, the patriarch of the Adams family of South Carolina. He graduated from Yale College in 1831.[1]

In 1832, he joined the South Carolina Nullification Convention which deliberated until 1833 on whether states could nullify federal laws. He was an opponent of nullification.

In 1854, Adams was elected the 66th Governor of South Carolina, a position he held through 1857. In 1856, he recommended a resumption of the foreign slave trade as a way of eliminating illicit trade. The legislature rejected this proposal.

He married Jane Margaret Scott in April 1832.[1] They had 11 children. Among his many children was Lt. Colonel Warren Adams, of the Confederate States Army, who was in command of Battery Wagner, South Carolina during the American Civil War.[3]