Cândido Portinari (December 29, 1903 – February 6, 1962) was one of the most important Brazilian painters as well as a prominent and influential practitioner of the neo-realism style in painting.

Portinari painted more than five thousand canvases, from small sketches to monumental works such as the Guerra e Paz panels, which were donated to the United Nations Headquarters in 1956. Portinari developed a strong social preoccupation throughout his oeuvre and maintained an active life in the Brazilian cultural and political worlds.

Born to Giovan Battista Portinari and Domenica Torquato, Italian immigrants from Chiampo, Veneto, in a coffee plantation near Brodowski, in São Paulo, Portinari studied at the Escola Nacional de Belas Artes (ENBA) in Rio de Janeiro. In 1928 he won a gold medal at the ENBA and a trip to Paris where he stayed until 1930, when he returned to Brazil.

The journey significantly influenced Portinari. After his return, Portinari began portraying the reality of Brazil, from its natural beauties to the harsh lives of the country's most impoverished populations, pursuing an amalgamation of his academic formation with the modernist avant-gardes. In 1939, Portinari exposed at the New York World's Fair. In the following year, Portinari had for the first time a canvas exposed at the Museum of Modern Art.The rise of fascism in Europe, the wars and the close contact with Brazilian problematic society, reaffirmed the social character of his work, as well as conducting him to political engagement.

He joined the Brazilian Communist Party and stood for deputy in 1945[1] and for senator in 1947,[2] but had to flee for Uruguay due to the persecution of communists during the government of Eurico Gaspar Dutra. In 1951, the first São Paulo Art Biennial dedicated a special room for his works. He returned to Brazil in the following year, after a declaration of general amnesty from the government. In 1956, after the United Nations had appealed to its affiliated countries for the donation of a work of art to the organization's new headquarters. Brazil designated Portinari for the task, who took four years and around 180 studies to complete the painting. Dag Hammarskjold, UN Secretary-General, named the work "the most important monumental work of art donated to the UN".[3]

Portinari suffered from ill health during the last decade of his life. He died in Rio de Janeiro in 1962 in result of lead poisoning from his paints.[4]

There were a number of commemorative events in the centenary of his birth in 2003, including an exhibition of his work in London. 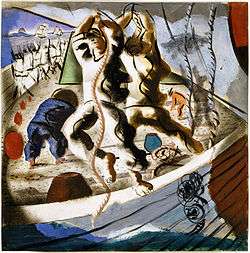 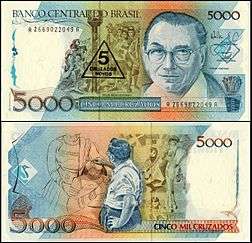 A 1989 Brazilian banknote featuring Portinari on both sides

Portinari's works comprehend a strong will to represent Brazilian people and their traits. Portinari himself said he would "paint that people with that clothing and that color". According to Antonio Callado, Portinari's oeuvre demonstrate a "monumental book of art which teaches Brazilians to love more their land".[8]

Portinari was capable of transcending his original academic formation by experiencing with and absorving modernist technics and styles, which fundamentally created his painting personality. The range and sweep of his output is remarkable. It includes paintings depicting rural and urban labour, refugees fleeing the hardships of Brazil's rural north-east; and, despite these major and better known aspects of his work, treatments of the key events in the history of Brazil since the arrival of the Portuguese in 1500, images of childhood, portraits of members of his family and leading Brazilian intellectuals, illustrations for books and tiles decorating the Church of São Francisco at Pampulha, Belo Horizonte.

His career coincided with and included collaboration with Oscar Niemeyer amongst others. Portinari's works can be found in galleries and settings in Brazil and abroad, ranging from the family chapel in his childhood home in Brodowski to his panels Guerra e Paz (War and Peace) in the United Nations building in New York and four murals in the Hispanic Reading Room of the Library of Congress in Washington, DC.[9]