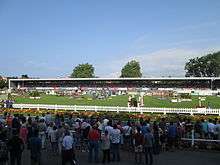 The Prince of Asturias Grand Prix in the CSIO Gijón 2014

The International Show Jumping Contest of Gijón, commonly known as CSI Gijón or CSIO Gijón when it becomes official, is a show jumping event held in Gijón, Spain, at the Las Mestas Sports Complex.

The event was established in 1941 to promote equestrianism in Gijón and to offer an important sporting event in the city during the summertime. The first competition took place during 20–24 August 1942, and was a complete success as crowds of around 10,000 people gathered for the event, a rather unusual amount for what was not considered a spectator sport at the time.

One of the main characteristics of the event is the fact that betting is allowed and very popular among spectators.

When the event is chosen as Spain's official show jumping event, becoming a CSIO, it includes a Nations Cup competition. In 1999 was the Samsung Nations Cup Final event.