For other uses, see Cachet (disambiguation). 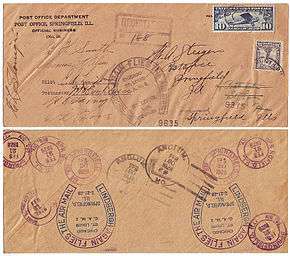 Autographed USPOD cover with rubber-stamp cachets and backstamps flown northbound by Charles Lindbergh between St. Louis and Chicago on February 20, 1928, and southbound on February 21. In philately, a cachet is a printed or stamped design or inscription, other than a cancellation or pre-printed postage, on an envelope, postcard, or postal card to commemorate a postal or philatelic event. There are official and private (independent of postal authorities) cachets.[1] They commemorate everything from the first flight on a particular route, to the Super Bowl. Cachets are also frequently made, either by private companies or a government, for first day of issue stamp events or "second-day" stamp events. They are often present on event covers.

Cachet-making is considered an art form, and cachets may be produced by using any number of methods, including drawing or painting directly onto the envelope, serigraphy, block printing, lithography, engraving, laser printing, attachment of photographs or other paper memorabilia, etc. Frequently flight cachets (which have also been used in space and on the moon) are rubber-stamped.

The largest and best-known cachet-making companies, which typically produce thousands or tens of thousands of printed cachets for U.S. stamp issues, are Artcraft, Artmaster, Fleetwood, House of Farnam, and Colorano.

This article is issued from Wikipedia - version of the 6/1/2014. The text is available under the Creative Commons Attribution/Share Alike but additional terms may apply for the media files.