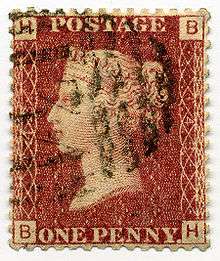 The Penny Red was used in the UK for many years, and comes in hundreds of variations which are subject to detailed study by philatelists. 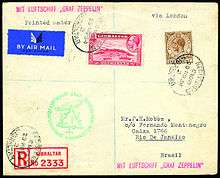 Zeppelin mail from Gibraltar to Rio de Janeiro, Brazil via Berlin on the Christmas flight (12th South American flight) of 1934. This cover would be of interest to Postal Historians, Aerophilatelists and Thematic collectors.

A large stamp show (philatelic exhibition) at which collectors and dealers meet.

Philately (/fɪˈlætəliː/ fi-LA-tə-lee) is the study of stamps and postal history and other related items. It also refers to the collection, appreciation and research activities on stamps and other philatelic products. Philately involves more than just stamp collecting, which does not necessarily involve the study of stamps. It is possible to be a philatelist without owning any stamps.[1] For instance, the stamps being studied may be very rare, or reside only in museums.

The word "philately" is the English version of the French word "philatélie", coined by Georges Herpin in 1864.[2] Herpin stated that stamps had been collected and studied for the previous six or seven years and a better name was required for the new hobby than timbromanie, which was disliked.[3] He took the Greek root word φιλ(ο)- phil(o)-, meaning "an attraction or affinity for something", and ἀτέλεια ateleia, meaning "exempt from duties and taxes" to form "philatelie".[4] The introduction of postage stamps meant that the receipt of letters was now free of charge, whereas before stamps it was normal for postal charges to be paid by the recipient of a letter.

The alternative terms "timbromania", "timbrophily" and "timbrology" gradually fell out of use as philately gained acceptance during the 1860s.[3]

The origins of philately lie in the observation that in a number of apparently similar stamps, closer examination may reveal differences in the printed design, paper, watermark, colour, perforations and other areas of the stamp. Comparison with the records of postal authorities may or may not show that the variations were intentional, which leads to further inquiry as to how the changes could have happened, and why. To make things more interesting, thousands of forgeries have been produced over the years, some of them very good, and only a thorough knowledge of philately gives any hope of detecting the fakes.

Traditional philately is the study of the technical aspects of stamp production and stamp identification, including:

The identification of watermarks is important and may be done with the naked eye by turning the stamp over or holding it up to the light. If this fails then watermark fluid may be used, which "wets" the stamp to reveal the mark.

Philatelic organisations sprang up soon after people started collecting and studying stamps. They include local, national and international clubs and societies where collectors come together to share their hobby.