Calvin Jong-a-Pin (born 18 July 1986) is a Dutch footballer plays as a left back who plays for the Japanese club FC Machida Zelvia.

Primarily considered a central defender, Jong-a-Pin has proved extremely versatile and has been deployed as a left back and a defensive midfielder at various spells in his career.

His ancestor came from China and moved to Surinam – "Jong-A-Pin" is his ancestor's full name and in fact, in accordance with the habits of the Chinese people, his real last name is Jong. 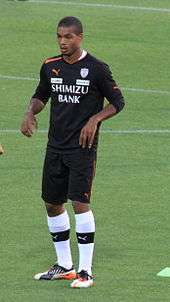 In 2006 Jong-a-Pin signed a five-year deal with Heerenveen. He made his debut against FC Groningen being the youngest starting player at the age of 19 in the match. In his first season Jong-a-Pin was backup to Kristian Bak Nielsen as Left Back. In the 2007-08 season, Jong-a-Pin became a regular due to the departure of Nielsen playing 23 matches in the Eredivisie. Due to Jong-a-Pin's impressive performances in 2007, he was selected by Foppe de Haan in the 18-man squad to participate in the 2008 Summer Olympics for Netherlands, playing in three matches in the tournament. In 2009 Jong-a-Pin joined Vitesse Arnhem on loan. After a very impressive season with Vitesse playing 30 matches scoring one goal, Heerenveen were convinced he was going to return as a starter in the Heerenveen line-up. Jong-a-Pin returned and was played as starting Left Back in the 2010-11 season and has played 29 matches for Heerenveen. Jong-a-Pin contract expires in the Summer 2011 and many teams such as Ajax and Feyenoord have been attracted due to his consistent performances.

On 21 February 2016, Jong-a-Pin signed for J2 League side FC Machida Zelvia, arriving on a free transfer.[1]

In 2007 Jong-a-Pin was called up by Jong Oranje coach Foppe de Haan to be part of his squad for the 2007 UEFA European Under-21 Football Championship held in the Netherlands. Jong-a-Pin participated in both of their first round group matches against Israel (1–0 win) and Portugal (2–1 win) to secure a semi final spot and to qualify for the 2008 Summer Olympics. Later the final was reached with a 1–1, 13–12 win after a penalty shootout with 32 penalty kicks taken against England. The Dutch went on to retain their 2006 title by beating Serbia 4–1 in the final. Jong-a-Pin played 3 games in the 2008 Summer Olympics.

His family is from Suriname, with some Chinese ancestry from his father's side.[2]