Rudolphus "Roy" Antonius Makaay (born 9 March 1975) is a Dutch football manager and former footballer who played as a centre-forward. He was known for his goal-scoring ability as a result of his "aerial prowess and quick drives to the net where he can put the ball away with either foot."[2]

He began his career at Vitesse Arnhem and Tenerife before moving to Deportivo de La Coruña in 1999 and helping the side to their first La Liga title in his first season there. He also won the Copa del Rey in 2002 and the following season was given the European Golden Boot for a 29-goal haul. He then moved to Bayern Munich for a then club record €18.75 million, where he picked up the nickname Das Phantom (the phantom), for his ability to score out of nowhere, as well as Tor Maschine (goal machine), for his consistent ability to find the back of the net. After winning two consecutive Bundesliga and DFB-Pokal doubles at Bayern, he returned to the Netherlands with Feyenoord in 2007.

A full international from 1996 to 2005, Makaay scored 6 international goals in 43 matches despite competition for a place in the national team. He competed with the Dutch side at two UEFA European Championships and the 2008 Olympics.

He was first recognized as a talented striker while playing for Vitesse in the mid-1990s and honed his skills at the Spanish First Division with Tenerife and later with Deportivo La Coruña.

In July 1999, Makaay was signed by Deportivo La Coruña from Tenerife for a transfer fee of PTAS10 million.[3] He made his league debut on 22 August 1999 in the opening game of the season, where he scored a hat-trick to give Deportivo a 4–1 home victory over Alavés.[4] Makaay scored a total of 22 goals in 36 appearances in the 1999–2000 season, including in their final match against Espanyol to inspire the Galician club to their first La Liga title.[5]

He was the European Golden Boot winner for the 2002–03 season, his 29 goals made him the top scorer in Europe.

His first encounter with Bayern Munich came during the 2002–03 UEFA Champions League season when he scored a hat-trick at the Olympiastadion in Munich, in Deportivo's 3–2 win over the Bavarians on 19 September 2002.[6] 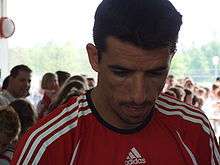 Makaay at Bayern Munich in April 2007

Bayern Munich kept a close eye on Makaay throughout the whole season and finally beat off stiff challenges from Manchester United and Chelsea to get their man. A then club record fee of €18.75 million was paid to Deportivo in November 2003 to sign him.[7] He scored 78 Bundesliga and 17 UEFA Champions League goals during his four seasons at Bayern.

On 7 March 2007, Makaay scored the quickest goal in Champions League history, finding the net after just 10.12 seconds to help Bayern overturn a first-leg deficit and put Real Madrid out of the competition at the round of sixteen. Madrid kicked off but Roberto Carlos failed to control the backpass, allowing Bayern's Hasan Salihamidžić to steal the ball and feed it to Makaay who tapped it past goalkeeper Iker Casillas.[9][10]

Makaay returned to the Netherlands for the 2007–08 season, when Feyenoord signed him to a three-year deal worth €5 million in June 2007. Makaay's decision to leave was influenced by Bayern Munich's decision to sign forwards Luca Toni and Miroslav Klose.[11]

Makaay retired at the end of the 2009–10 season, scoring a hat-trick in his last match against Heerenveen.

Makaay played 31 times for the Dutch U-21 national team, which equals a record with Arnold Bruggink.

His international caps for the Dutch national team were limited due to players such as Patrick Kluivert, Dennis Bergkamp and Ruud van Nistelrooy. Makaay was, however, capped for his country at Euro 2000 and Euro 2004. In the latter tournament, he scored against Latvia in the first round.

After his retirement he was named as the assistant coach of the U-13 team of his last club Feyenoord under head coach Gerard Rutjes.[12]