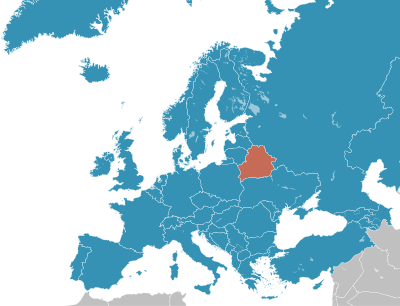 Europe holds the greatest concentration of abolitionist states (blue). Map current as of 2013
Abolished for all offenses
Retains death penalty

The death penalty has been completely abolished in all European countries except for Belarus. The absolute ban on the death penalty is enshrined in both the Charter of Fundamental Rights of the European Union (EU) and the European Convention on Human Rights of the Council of Europe, and is thus considered a central value. Of all modern European countries, San Marino and Portugal were the first to abolish capital punishment, whereas only Belarus still practice capital punishment in some form or another. In 2012, Latvia became the last EU Member State to abolish capital punishment in wartime.[1]

In Russia the death penalty has been indefinitely suspended (under moratorium), therefore the country is abolitionist in practice.[2]

Except for Belarus, which carried out an execution in 2016, the last executions by a European country occurred in Kazakhstan in 2003, and Ukraine in 1997.

Further information: Use of capital punishment by country

The Council of Europe has two main instruments against capital punishment: Protocol no.6 and Protocol no.13.

The Protocol no.6 which prohibits the death penalty during peacetime has been ratified by all members of the Council of Europe, except Russia (which has signed, but not ratified).

Protocol no.13 prohibits the death penalty in all circumstances (including for war crimes). All member states of the Council of Europe have ratified it, except Azerbaijan and Russia, which have not signed it, and Armenia, which has signed but not yet ratified. All have, however, abolished the death penalty. In 2014, Poland was the latest country to ratify Protocol no.13.[3][4]

The only country in Europe that continues to execute in the 21st century is Belarus (last execution done in 2016).[5]

Abolition has been common in European history, but has only been a real trend since the end of the Second World War when human rights became a particular priority. The Kingdom of Italy had abolished the death penalty for civilians with the adoption of the Zanardelli Penal Code of 1889, but the Fascists had reintroduced it with the 1930 Penal Code.

The European Convention on Human Rights was adopted in 1950, but some countries took many years to ratify it. The United Kingdom retained the death penalty for high treason until 1998; however, this technicality was superseded by the absolute ban on the death penalty in 1976. William Joyce was the last person to be put to death for high treason in the UK, on January 3, 1946.

A moratorium on the death penalty has been in place in Russia since January 1, 2010. According to the November 19, 2009 decision of the Constitutional Court of the Russian Federation, the death penalty shall not be practiced in Russia at any time before the ratification of the above-mentioned protocol. The Constitutional Court has also clarified that the decision is not an extension of the moratorium, but the abolition of the capital punishment since it will be no longer possible to practice it legally.

2009 was the first year that no one was executed anywhere in Europe, however in March 2010 Belarus executed the last two people on its death row.[8]

The European Union (EU) has long since been against the death penalty, supporting the European Convention, and its 2000 Charter of Fundamental Rights included an absolute ban on the death penalty in all circumstances. The Charter has been made legally binding by the Treaty of Lisbon as it got fully ratified and effective on December 1, 2009.[9] The treaty also has a provision for the EU to join the Council of Europe and accede to the European Convention on Human Rights. The EU has been an active promoter of abolition worldwide and has been promoting a United Nations moratorium on the death penalty, however some national governments such as Poland have opposed such moves.

The Council of Europe has made abolition of the death penalty a prerequisite for membership. As a result, no execution has taken place on the territory of the organisation's member states since 1997. The Parliamentary Assembly of the Council of Europe continues to monitor the capital punishment issue. The current General Rapporteur on the abolition of the death penalty for the Parliamentary Assembly is German member of parliament Marina Schuster.[10]

The only European country that executes criminals is Belarus, as that country is not party to the European Convention on Human Rights. Executions in Belarus are carried out by shooting.

Capital punishment in Russia has been indefinitely suspended, although it still remains codified in its law. There exists both an implicit moratorium established by the President Yeltsin in 1996, and an explicit one, established by the Constitutional Court of Russia in 1999 and which was most recently reaffirmed in 2009. Russia has not executed anyone since 1996, and the regulations of the Council of Europe prohibit it from doing so at any time in the future.

Capital punishment in Kazakhstan has been abolished for ordinary crimes, but is still permitted for crimes occurring in special circumstances (such as war crimes). Kazakhstan is not a member of the Council of Europe.

In Europe there are also partially unrecognized states. In 2006 the Parliamentary Assembly of the Council of Europe wrote that: "While Nagorno-Karabakh abolished the death penalty on 1 August 2003, when it decided to implement the Republic of Armenia's new Criminal Code on its territory, the other territories, Abkhazia, Transnistria and South Ossetia, have not done so, retaining capital punishment in their legislation both in peacetime and in wartime. As South Ossetia decided in 1992 to make Russian legislation applicable on its territory, it has observed a moratorium on executions since 1996. The death penalty is in the Transnistrian Criminal Code which came into force in 2002. In July 1999, de facto President Smirnov ordered a moratorium on executions, and there is said to be only one prisoner on death row in Transnistria."[31] Abkhazia formalized its moratorium in 2007, moving towards full abolition. On 12 January 2007 the parliament of Abkhazia adopted a law entitled "Moratorium on the Death Penalty", establishing a moratorium on executions during peacetime. Since 1993 the country has had a de facto moratorium on executions.[32] Although there have been 10 sentences of death in Abkhazia, these have never been implemented.[33]

The Donetsk People's Republic introduced the death penalty in 2014 for cases of treason, espionage, and assassination of political leaders. There had already been accusations of extrajudicial execution occurring.[34]