This article is about the Roman Emperor. For the Phasmatodea genus, see Carausius (insect).

Marcus Aurelius Mausaeus Valerius Carausius (died 293) was a military commander of the Roman Empire in the 3rd century. He was a Menapian from Belgic Gaul,[1] who usurped power in 286, during the Carausian Revolt, declaring himself emperor in Britain and northern Gaul (Imperium Britanniarum). He did this only 13 years after the Gallic Empire of the Batavian Postumus was ended in 273. He held power for seven years, before being assassinated by his finance minister Allectus.

Carausius was of humble origin, a Menapian who distinguished himself during Maximian's campaign against the Bagaudae rebels in northern Gaul in 286. This success, and his former occupation as a pilot, led to his appointment to command the Classis Britannica, a fleet based in the English Channel, with the responsibility of eliminating Frankish and Saxon pirates who had been raiding the coasts of Armorica and Belgica. He was suspected of keeping captured treasure for himself, and of allowing pirates to carry out raids and enrich themselves before taking action against them, and Maximian ordered his execution. In late 286 or early 287 Carausius learned of this sentence and responded by declaring himself Emperor in Britain and northern Gaul.[2] His forces comprised not only his fleet, augmented by new ships he had built and the three legions stationed in Britain, but also a legion he had seized in Gaul, a number of foreign auxiliary units, a levy of Gaulish merchant ships, and barbarian mercenaries attracted by the prospect of booty.[3]

British historian and archaeologist Sheppard Frere wonders how Carausius was able to win support from the army when his command had been sea-based, and speculates that he had perhaps been involved in an unrecorded victory in Britain, connected with Diocletian's assumption of the title Britannicus Maximus in 285, and signs of destruction in Romano-British towns at this time.[4] The campaign against the Bagaudae, however, was evidently land-based and may have been responsible for Carausius's popularity with the army. Equally, if the accusations of larceny are true, he could perhaps have afforded to buy their loyalty.

Maximian prepared an invasion of Britain in 288 or 289 to oust him,[5] but it failed. A panegyric delivered to Constantius Chlorus attributes this failure to bad weather, but notes that Carausius claimed a military victory.[6] Eutropius says that hostilities were in vain thanks to Carausius's military skill, and peace was agreed.[7] Carausius began to entertain visions of legitimacy and official recognition. He minted his own coins and brought their value into line with Roman issues as well as acknowledging and honouring Maximian and then Diocletian. Coinage is the main source of information about the rogue emperor; his issues were initially crude but soon became more elaborate and were issued from mints in Londinium, Rotomagus and a third site, possibly Colonia Claudia Victricensis.

Carausius appears to have appealed to native British dissatisfaction with Roman rule; he issued coins with legends such as Restitutor Britanniae (Restorer of Britain) and Genius Britanniae (Spirit of Britain). He also used coins for more sophisticated propaganda. He issued the first proper silver coins that had appeared in the Roman Empire for generations, knowing that good quality bullion coinage would enhance his legitimacy and make him look more successful than Diocletian and Maximian. Some of these silver coins bear the legend Expectate veni, 'Come long-awaited one', recognised to allude to a line in the Aeneid by the Augustan poet Virgil, written more than 300 years previously. He was trying to suggest that not only was he, Carausius, a kind of messianic new ruler, but was also showing his association with Roman culture rather than any kind of remote provincial culture.

Some of the silver coins bear the legend RSR in the exergue (an area on a coin below the legend). This was considered a mystery for some time. Two Carausian medallions, now in the British Museum have also been found. One has RSR in the exergue; the other has INPCDA. Since 1998 these letters have been recognised as representing the sixth and seventh lines of the Fourth Eclogue of Virgil, which reads Redeunt Saturnia Regna, Iam Nova Progenies Caelo Demittitur Alto, meaning 'The Golden Ages are back, now a new generation is let down from Heaven above'. This poem was as famous in the Roman world as Shakespeare's works are today, so any educated reader would certainly have realized what the initials stood for (it was commonplace in antiquity to reduce slogans and phrases to abbreviations).[8] No other Roman emperor in history ever made such an explicit reference to famous Roman literature. It is quite extraordinary that in a remote province like Britain a rebel emperor should utilise such a method to appeal to his public. He was claiming to represent a revival of traditional Roman virtues and the great traditions of the Empire as established by Augustus in the last decades of the first century BC, not in Rome but in Britain.

A milestone from Carlisle with his name on it suggests that the whole of Roman Britain was in Carausius's grasp.[9] The inscription reads (with expansions in square brackets) "IMP[eratori] C[aesari] M[arco] | AVR[elio] MAVS[aeo] | CARAVSIO P[io] F[elici] | INVICTO AVG[usto]", this translates as "For the Emperor Caesar Marcus Aurelius Mausaeus Carausius Pius Felix Invictus Augustus".[10] The title indicates he considered himself equal to the Tetrarchy's senior emperors (Augusti), rather than their subordinate junior emperors (Caesares). The milestone was reused in about 306, burying the first inscription and adding a new one at the other end, which translates as "For Flavius Valerius Constantinus, most noble Caesar" and refers to Marcus Flavius Valerius Constantius Herculius Augustus (Constantius I).[11] Some more text on the stone, probably a continuation of the Carausius inscription after a gap because it is orientated the same way, was chiselled away, presumably when the stone was reused; the traces remaining suggest it included (translated) "....the Emperor..."

It has also been suggested that Carausius may have been responsible for the series of fortifications on both sides of the English Channel known as the Saxon Shore.[12][13]

This situation continued until 293, when Constantius Chlorus (Constantius I), now the western Caesar, marched into Gaul and reclaimed it for the empire. He isolated Carausius by besieging the port of Gesoriacum (Boulogne-sur-Mer) and invading Batavia in the Rhine delta, securing his rear against Carausius's Frankish allies. He could not yet mount an invasion of Britain until a suitable fleet could be built.[14] Nevertheless, Carausius's grip on power was fatally undermined. Allectus, whom he had put in charge of his treasury, assassinated him and assumed power himself.[15] His reign would last only three years, after which he was defeated and killed by Constantius' subordinate Julius Asclepiodotus.[16] 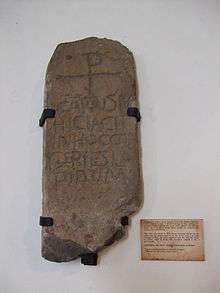 A stone slab bearing his name in the Latin inscription "CARAVSIVS HIC IACIT IN HOC CONGERIES LAPIDVM" (translation: "Carausius lies here in this lump/heap of stones") with the Chi Rho symbol was found in 1856 when a derelict church was being dismantled in Penmachno, an early Christian settlement four miles south of Betws-y-Coed; it is now in the church built on the same site.[17] It has been suggested this slab was his grave stone or was placed on top of his cairn/mound.

In April 2010 a large hoard containing over 52,500 Roman coins was unearthed in a field near Frome, Somerset. 766 coins were determined to have been produced during Carausius' reign, of which only 5 were silver denarii. This find roughly equates to four years' pay for a Roman legionary, but the presence of later coin issues suggests that the group was not deposited until after Carausius' death.[18]

In Geoffrey of Monmouth's legendary History of the Kings of Britain (1136) Carausius is a Briton of humble birth, who by his courage persuades the Roman Senate to give him command of a fleet to defend Britain from barbarian attack. Once given the fleet, however, he sails around Britain stirring up unrest and raises an army against Bassianus, the historical Caracalla, here a king of Britain. Carausius defeats Bassanius by persuading his Pictish allies to desert him in exchange for grants of land in Scotland and sets himself up as king. Hearing of Carausius's treachery, the Romans send Allectus to Britain with three legions. Allectus defeats Carausius, kills him, and sets himself up as king in his place.[19]