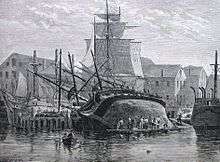 An Old Whaler Hove Down For Repairs, Near New Bedford, a wood engraving drawn by F. S. Cozzens and published in Harper's Weekly, December 1882.

Careening (also known as "heaving down")[1] is the practice of grounding a sailing vessel at high tide in order to expose one side of its hull for maintenance and repairs below the water line when the tide goes out.

The process could be assisted by securing a top halyard to a fixed object such as a tree or rock to pull the mast over as far as possible. Maintenance might include repairing damage caused by dry rot or cannon shot, tarring the exterior to reduce leakage, or removing biofouling organisms such as barnacles to increase the ship's speed. One exotic method was the ancient practice of beaching a ship on a shingle beach with the goal of using wave action and the shingle to scour the hull or side of the ship.

A beach favoured for careening was called a careenage. Today, only small vessels are careened, while large vessels are placed in dry dock.[2] 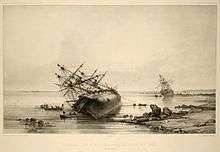 A related practice was a Parliamentary heel, in which the vessel was heeled over in deep water by shifting weight, such as ballast or guns, to one side. In this way the upper sides could be cleaned or repaired with minimal delay. Famously, HMS Royal George was lost while undergoing a Parliamentary heel in 1782.[2]

Pirates would often careen their ships because they had no access to drydocks. A secluded bay would suffice for necessary repairs or hull cleaning, and such little “safe havens” could be found throughout the islands in the Caribbean and nearly around the world. One group of islands, Tres Marias, became popular when Francis Drake had sailed there in 1579 and quickly became a place for piracy.[3]