A shingle beach in Batanes, Philippines

Pebbles on a shingle beach in Somerset, England

A shingle beach is a beach which is armoured with pebbles or small- to medium-sized cobbles (as opposed to fine sand). Typically, the stone composition may grade from characteristic sizes ranging from 2 to 200 millimetres (0.1 to 7.9 in) diameter. 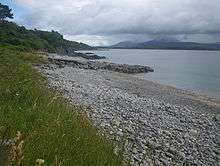 While this beach landform is most commonly found in Europe, examples are found in Bahrain, North America and in a number of other world regions, such as the east coast of New Zealand's South Island, where they are associated with the shingle fans of braided rivers. Though created at shorelines, post-glacial rebound can raise shingle beaches as high as 200 metres (660 ft) above sea level, at the High Coast in Sweden.

The ecosystems formed by this unique association of rock and sand allow colonization by a variety of rare and endangered species.[1]

Shingle beaches are typically steep, because the waves easily flow through the coarse, porous surface of the beach, decreasing the effect of backwash erosion and increasing the formation of sediment into a steeply sloping beach.[2]

Shingle beaches are often criticized as undesirable for visitors. Canterbury City Council notes that the nearby shingle beach at Whitstable is uncomfortable to walk and lie on.[3] Also, at least one advertiser has replaced an image of a shingle beach with sand in promotional material.[4] However, shingle beaches are popular among rock collectors for the varying rock types that can be found.

Notable shingle beaches around the world