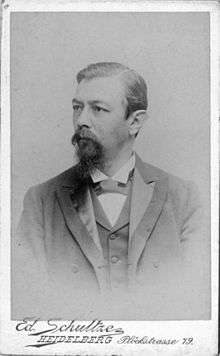 Carl Bezold (18 May 1859, Donauwörth – 21 November 1922, Heidelberg) was a German orientalist. Primarily known for his Akkadian (Babylonian-Assyrian) research, he also worked with other Semitic languages—Syriac, Ge'ez (Ethiopic) and Arabic.[1]

He was educated at the Universities of Munich and Leipzig, where he studied with Assyrologist Friedrich Delitzsch. In 1883 he obtained his habilitation at Munich with a thesis titled Die Schatzhöhle; aus dem syrischen texte dreier unedirten Handschriften [2] ("The Treasure Trove", second part issued in 1888). Later on, he spent several years working at the British Museum in London. In 1894 he became a full professor at the University of Heidelberg.[1]

in 1909 he edited and printed the Ethiopic epic Kebra Nagast, collating the most valuable texts and with critical notes.[6]

In June 1901 he was awarded the honorary degree of Doctor of Laws (DLL) from the University of Glasgow.[7]

In 1926 his Babylonian-Assyrian glossary ("Babylonisch-assyrisches Glossar") was published posthumously by his widow, Adele Bezold, and Hittitologist Albrecht Goetze.[8]