This article is about the naval unit. For the video game, see Carrier Air Wing (arcade game). 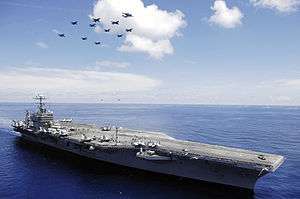 A carrier air wing (abbreviated CVW) is an operational naval aviation organization composed of several aircraft squadrons and detachments of various types of fixed wing and rotary wing aircraft. Organized, equipped and trained to conduct modern US Navy carrier air operations while embarked aboard aircraft carriers, the various squadrons in an air wing have different, complementary (and sometimes overlapping) missions, and provide most of the striking power and electronic warfare capabilities of a carrier battle group (CVBG). While the CVBG term is still used by other nations, the CVBG in US parlance in now known as a carrier strike group (CSG).

Until 1963, Carrier Air Wings were known as Carrier Air Groups (CAGs). Carrier Air Wings are what the United States Air Force would call "composite" wings, and should not be confused with U.S. Navy Type Wings (such as Strike Fighter Wing Atlantic), which are primarily administrative and training commands composed of squadrons of the same type of carrier-based aircraft when not deployed. The United States Marine Corps equivalent command-level organization to a CVW is the Marine Aircraft Group (MAG). However, MAGs are shore-based (with sea-based capability) and may contain any combination of aircraft squadrons and aviation support units. Carrier Air Wings integrate closely with their assigned aircraft carriers, forming a "carrier/air wing team" that trains and deploys together. There are currently ten U.S. Navy Carrier Air Wings, four based at NAS Oceana, Virginia, five based at NAS Lemoore, California, and one forward deployed to NAF Atsugi, Japan. 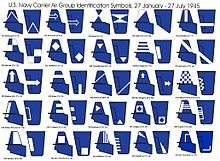 The first Carrier Air Groups (as they were then called) were activated in 1937. Initially, the commander of the air group (known as the "CAG") was the most senior officer of the embarked squadrons and was expected to personally lead all major strike operations, co-ordinating the attacks of the carrier's fighter, bomber, and torpedo planes in combat. The CAG was a department head of the ship reporting to the carrier's commanding officer.

From July 1937 to mid-1942, Carrier Air Groups were permanently assigned to and identified by their parent aircraft carrier, and group squadrons were numbered according to the carrier's hull number. For example, the Enterprise Air Group, assigned to USS Enterprise (CV-6), were all numbered "6": Fighting Squadron (VF) 6, Bombing Squadron (VB) 6, etc.[1] From 1942, numerical designation of air groups began, the first being Carrier Air Group 9 (CVG-9), established on 1 March 1942.[2] For a while, they were given unique numbers according to their assigned carriers' hull number (i.e., the Enterprise Air Group became CAG-6).[3] This numbering scheme was also soon scrapped as carrier groups (now abbreviated CVGs) frequently moved from carrier to carrier. At this point, the carrier groups simply retained their number designation regardless of the carrier assigned.

The first formal system for air group identification (Visual Identification System for Naval Aircraft) was established in January 1945. This consisted of geometric symbols that identified the parent carrier, not the air group. As there were just too many carriers and the symbols were hard to remember or to describe over the radio, a single or double letter system was introduced in July 1945. The letters, however, still identified the carrier, not the air group. The following identifications are known:[4]

Shangri-La is known to have had her hull number "38" on the flight deck forward replaced by her air group identification letter "Z".[5] Due to the ongoing combat and the end of the war, a mix of identification codes was used in late 1945. Starting in late 1946, the letters identified the carrier air group, and not the carrier. The use of single letters was discontinued in 1957.[6]

On 15 November 1946, to correct the results of demobilization which had left squadron numbers all out of sequence, sweeping changes were made in air unit designations.[2] Carrier Air Groups of four types were designated according to their assigned ship, as CVBG for Battle Carrier, CVG for Attack Carrier, CVLG for Light Carrier and CVEG for Escort Carrier. Two years later, on 1 September 1948, all carrier air groups became CVG regardless of their carrier affiliation.

On 20 December 1963, Carrier Air Groups were retitled Wings, and the acronym CVG became CVW.[2] Replacement Air Groups, which were set up in 1958, became Combat Readiness Air Groups on 1 April 1963. Often known by the short titles RAG and CRAG in the respective periods, their designation throughout was RCVG. When Groups became Wings, CRAG became CRAW and RCVG became RCVW.

Prior to 1983, CAGs were typically post-squadron command aviators in the rank of Commander who would typically promote to Captain while in command and would subsequently track to command of a deep draft support vessel followed by command of an aircraft carrier once they achieved greater seniority in the rank of Captain. In 1983, Secretary of the Navy John Lehman elevated the CAG to be coequal with the Captain of the aircraft carrier to which the air wing embarked, with both officers reporting directly to the embarked Flag Officer who was Commander of the Carrier Battle Group. The CAG was then referred to as a "Super CAG." Later a slightly junior Captain was added as the Deputy CAG (DCAG), with the DCAG assisting the CAG until he/she eventually "fleets up" to the CAG position. This system is still in place, although the term "Super CAG" soon reverted to the traditional "CAG."[8] 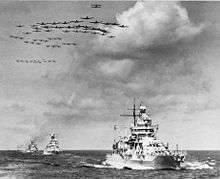 A Carrier Air Group over battleships in 1940.

Typical air group composition aboard the Yorktown Class carriers, at the beginning of World War II, consisted of approximately 72 aircraft:

During the course of the war in the Pacific, the compositions of the air groups changed drastically. The scouting squadrons were disestablished by early 1943 and the number of fighter planes was increased continuously. Typically in 1943 an Essex class carrier carried 36 fighters, 36 bombers and 18 torpedo planes.[9]

By the end of WWII, a typical Essex air group was over 100 aircraft, consisting of :

Carrier Air Groups typically had four fighter squadrons with 58 planes and an attack squadron of 14 planes. 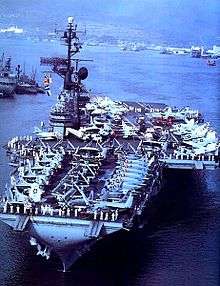 In 1965, a typical Carrier Air Wing consisted of:

By the end of the Vietnam War in 1973, a typical air wing consisted of ~90 aircraft: 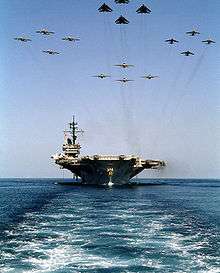 By the early 1980s, typical air wings were replacing F-4 Phantom IIs with Grumman F-14 Tomcats on Forrestal, Kitty Hawk, Enterprise and Nimitz class carriers and with F/A-18 Hornets onboard Midway class carriers. LTV A-7 Corsair IIs were also being replaced with F/A-18s, while Grumman KA-6D Intruder tankers and A-6E bombers with aerial refueling pods had replaced A-3s as tankers. EA-6B Prowlers had largely replaced EA-3s in the VAQ mission, although detachments of EA-3s from fleet air reconnaissance squadrons (VQ) soldiered on through the late 1980s as ELINT aircraft until replaced by the Lockheed ES-3A Shadow in the carrier-based VQ mission. The North American RA-5C Vigilante was also phased out in January 1980, replaced by F-14 Tomcats with Tactical Air Reconnaissance Pods (TARPS) 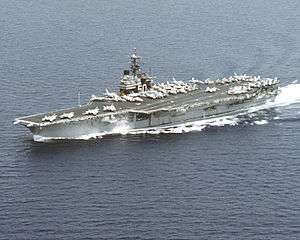 The Gulf War marked the largest concentrated use of carrier air wings since World War II. All F-4s had been retired and A-7Es had largely been replaced with F/A-18 Hornets.

From 1991 to 1995, several Type/Model/Series (T/M/S) aircraft were phased out of the active inventory (e.g., Regular Navy and Naval Air Reserve), to include the RF-8G Crusader, the A-7E Corsair II, ES-3A Shadow and the A-6E and KA-6D Intruder. While some of these retirements were due to obsolescence (RF-8G) or succession by newer aircraft (A-7Es replaced by F/A-18s), others were due strictly to post-Cold War perceived "Peace Dividend" budget measures on the part of certain Secretaries of Defense and the U.S. Congress (e.g., A-6 Intruder), with aircraft that still had useful remaining life being prematurely relegated to retirement. Other T/M/S aircraft saw the number of operational squadrons significantly reduced (e.g., F-14 Tomcat, E-2 Hawkeye) for similar budgetary reasons. During the same period, three more carrier air wings were disestablished: the Atlantic Fleet's Carrier Air Wing 13 on 1 January 1991,[16] followed by Carrier Air Wing 6 on 1 April 1992, and the Pacific Fleet's Carrier Air Wing 15 on 31 March 1995. In addition, the U.S. Naval Reserve's Carrier Air Wing Reserve 30 (CVWR-30) was disestablished on 31 December 1994.

A carrier air wing has a small command staff consisting of 16-20 officers and approximately 20 enlisted personnel. It is headed by the "CAG" (Commander, Air Group—a legacy term from the earlier term for the Air Wing) who is a Navy Captain or a Marine Corps Colonel with an aeronautical designation as a Naval Aviator or Naval Flight Officer. Although eligible, Marine assignments to "CAG" or "DCAG" (Deputy Commander) positions are typically limited to one Carrier Air Wing.

Second in command is the Deputy Commander (DCAG), also a Navy Captain or Marine Colonel aviator or NFO, who "fleets up" to the CAG position after about 18 months. Also on the staff are an Operations Officer (typically a Commander or Lieutenant Commander), a number of warfare specialists (typically Lieutenant Commanders or Lieutenants), two Wing Landing Signal Officers, an Intelligence Officer, and a Maintenance Officer. The air wing staff is often supplemented with squadron personnel, such as the squadron intelligence officers. The CAG reports to a Rear Admiral in the position of Commander, Carrier Strike Group and is coequal in stature with the Commanding Officer of the aircraft carrier as well as the embarked Destroyer Squadron (DESRON) Commander and the attached guided missile cruiser commanding officer. The CAG serves as the Strike Group's Strike Warfare Commander, responsible for all offensive strike operations (including Tomahawk Missiles). CAGs are typically qualified to fly at least two types of aircraft in the Carrier Air Wing inventory.

The air wing composition is designed to allow for broad striking power hundreds of miles from the carrier's position, while providing defense in depth of the battle group through early warning and detection of airborne, surface and subsurface targets. The modern U.S. Navy carrier air wing consists of:

Atlantic Fleet air wings have an "A" as the first letter of their tailcode identification, while those of the Pacific Fleet have an "N". The "A" or "N" is followed by a letter that uniquely identifies the air wing (e.g., CVW-1 aircraft, part of the Atlantic Fleet, have a tail code of "AB").[19][20] 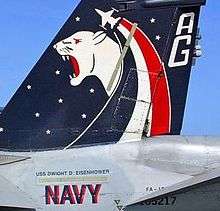 "AG" on tail indicates it is an Atlantic Fleet CVW-7 aircraft. The ship assigned is also indicated below the tail.

* Current law provides for 10 CVWs; of the nominally eleven active carriers (ten active carriers following decommissioning of USS Enterprise in December 2012 and until USS Gerald R. Ford is completed and commissioned), one is nearly always undergoing Refueling and Complex Overhaul and has no air wing assigned. Navy's FY17 budget request included disestablishment of CVW-14 in FY17. CVW-14 was deactivated in 2013 and though it can not be disestablished without Congressional action, it remains inactive with no commander or wing staff assigned and it is not currently assigned to any carrier.

CVW-17 transferred from Atlantic Fleet (with tail code AA) to Pacific Fleet (with tail code NA) in 2012 and was reassigned to USS Carl Vinson.[21] USS Enterprise decommissioned in December 2012 and CVW-1 was reassigned to USS Theodore Roosevelt in 2013[22]until USS Theodore Roosevelt shifted homeport to San Diego in 2015 at which time CVW-17 shifted to her. CVW-1 has not yet been reassigned to a CVN awaiting the commissioning of USS Gerald R. Ford (CVN-78)