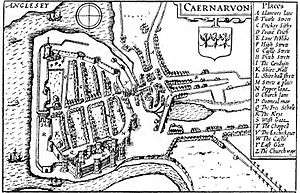 Map of Caernarfon in 1610 by John Speed, a classic example of a castle town

A castle town is a settlement built adjacent to or surrounding a castle. Castle towns were common in Medieval Europe. Some examples include small towns like Alnwick and Arundel, which are still dominated by their castles. In Western Europe, and England particularly, it is common for cities and towns that were not castle towns to instead have been organized around cathedrals.

This article is issued from Wikipedia - version of the 2/22/2014. The text is available under the Creative Commons Attribution/Share Alike but additional terms may apply for the media files.