For other uses, see Cauliflower (disambiguation). 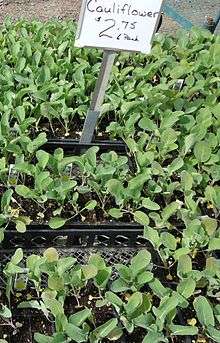 Cauliflower plants growing in a nursery in New Jersey.

Cauliflower is one of several vegetables in the species Brassica oleracea, in the family Brassicaceae. It is an annual plant that reproduces by seed. Typically, only the head (the white curd) is eaten. The cauliflower head is composed of a white inflorescence meristem. Cauliflower heads resemble those in broccoli, which differs in having flower buds. Brassica oleracea also includes broccoli, brussels sprouts, cabbage, collard greens, and kale, though they are of different cultivar groups.

The oldest record of cauliflower dates back to the 6th century B.C. In the 1st century AD, Pliny included what he called cyma among his descriptions of cultivated plants in Natural History: "Ex omnibus brassicae generibus suavissima est cyma,"[1] ("Of all the varieties of cabbage the most pleasant-tasted is cyma").[2] Pliny's descriptions likely refer to the flowering heads of an earlier cultivated variety of Brassica oleracea, but comes close to describing modern cauliflower.[3] In the 12th century, three varieties were described in Spain as introductions from Syria, where it had doubtless been grown for more than a thousand years. It is found in the writings of the Arab botanists Ibn al-'Awwam and Ibn al-Baitar, in the 12th and 13th centuries when its origins were said to be Cyprus.[4][5][6]

François Pierre La Varenne employed chouxfleurs in Le cuisinier françois.[7] They were introduced to France from Genoa in the 16th century, and are featured in Olivier de Serres' Théâtre de l'agriculture (1600), as cauli-fiori "as the Italians call it, which are still rather rare in France; they hold an honorable place in the garden because of their delicacy",[8] but they did not commonly appear on grand tables until the time of Louis XIV.[9] It was introduced in India in 1822 from England by the British.[10]

The origin of the name is from the Latin word caulis (cabbage) and flower.[11]

There are four major groups of cauliflower.[12]

Italian
This specimen is diverse in appearance, biennial and annual in type. This group also includes white, Romanesco, various brown, green, purple, and yellow cultivars. This type is the ancestral form from which the others were derived.
Northern European annuals
Used in Europe and North America for summer and fall harvest, it was developed in Germany in the 18th century, and includes the old cultivars Erfurt and Snowball.
Northwest European biennial
Used in Europe for winter and early spring harvest, this was developed in France in the 19th century, and includes the old cultivars Angers and Roscoff.
Asian
A tropical cauliflower used in China and India, it was developed in India during the 19th century from the now-abandoned Cornish type,[13] and includes old varieties Early Benaras and Early Patna.

There are hundreds of historic and current commercial varieties used around the world. A comprehensive list of about 80 North American varieties is maintained at North Carolina State University.[14]

White
White cauliflower is the most common color of cauliflower.
Orange
Orange cauliflower (B. oleracea L. var. botrytis) contains 25% more vitamin A than white varieties.[15] This trait originated from a natural mutant found in a cauliflower field in Canada.[16] Cultivars include 'Cheddar' and 'Orange Bouquet'.
Green
Green cauliflower, of the B. oleracea botrytis group, is sometimes called broccoflower. It is available in the normal curd shape and with a fractal spiral curd called Romanesco broccoli. Both have been commercially available in the U.S. and Europe since the early 1990s. Green-curded varieties include 'Alverda', 'Green Goddess' and 'Vorda'. Romanesco varieties include 'Minaret' and 'Veronica'.
Purple
The purple color in this cauliflower is caused by the presence anthocyanins, water-soluble pigments that are found in many other plants and plant-based products, such as red cabbage and red wine.[17] Varieties include 'Graffiti' and 'Purple Cape'.
In Great Britain and southern Italy, a broccoli with tiny flower buds is sold as a vegetable under the name "purple cauliflower"; it is not the same as standard cauliflower with a purple curd.

In 2013, global production of cauliflowers (combined for production reports with broccoli) was 22.3 million tonnes, with China and India together accounting for 76% of the total (table).[18] Secondary producers, each having about 0.5 million tonnes annually, were Spain, Mexico and Italy (table).[18]

100 grams of raw white cauliflower provides 25 calories, is low in fat, carbohydrates, dietary fiber and protein (table).[19] It has a high content (20% or more of the Daily Value, DV) of vitamin C and moderate levels (10-19% DV) of several B vitamins and vitamin K (table).[19]

Cauliflower contains several phytochemicals, common in the cabbage family, that are under preliminary research for their potential properties, including isothiocyanates and glucosinolates.[20]

Boiling reduces the levels of cauliflower compounds, with losses of 20–30% after five minutes, 40–50% after ten minutes, and 75% after thirty minutes.[21] However, other preparation methods, such as steaming, microwaving, and stir frying, have no significant effect on the compounds.[21]

Cauliflower can be roasted, boiled, fried, steamed, pickled, or eaten raw. When cooking, the outer leaves and thick stalks are removed, leaving only the florets. The leaves are also edible, but are most often discarded.[22] The florets should be broken into similar-sized pieces so they are cooked evenly. After eight minutes of steaming, or five minutes of boiling, the florets should be soft, but not mushy (depending on size). Stirring while cooking can break the florets into smaller, uneven pieces.

Low carbohydrate dieters can use cauliflower as a reasonable substitute for potatoes or rice; while they can produce a similar texture, or mouth feel, they lack the starch of the originals. Like certain legumes (including chickpeas), it can be turned into a flour from which such foods as pizza or biscuits are made.[23][24]

Fractal pattern of Romanesco broccoli, a variant form of cauliflower

Cauliflower has been noticed by mathematicians for its distinct fractal dimension,[25][26] predicted to be about 2.8.[27][28] One of the fractal properties of cauliflower is that every branch, or "module", is similar to the entire cauliflower. Another quality, also present in other plant species, is that the angle between "modules," as they become more distant from the center, is 360 degrees divided by the golden ratio.[29]