For other uses, see Mutant (disambiguation). 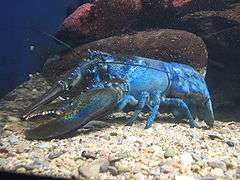 The blue lobster is an example of a mutant.

In biology and especially genetics, a mutant is an organism or a new genetic character arising or resulting from an instance of mutation, which is a base-pair sequence change within the DNA of a gene or chromosome of an organism. The natural occurrence of genetic mutations is integral to the process of evolution. The study of mutants is an integral part of biology; by understanding the effect that a mutation in a gene has, it is possible to establish the normal function of that gene.[2]

In some organisms mutants can be created by gene targeting to assess the function of any given gene. This experimental approach is called reverse genetics.[3] For example, a collection of knockout-moss mutants can be used to identify genes with so far unknown functions.[4]Mutation can be classified into two. Harmful and helpful.

Although not all mutations have a noticeable phenotypic effect, the common usage of the word "mutant" is generally a pejorative term only used for noticeable mutations.[5] Previously, people used the word "sport" (related to spurt) to refer to abnormal specimens. The scientific usage is broader, referring to any organism differing from the wild type.