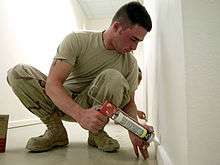 Caulking is both the processes and material (also called sealant) to seal joints or seams in various structures and some types of piping. The oldest form of caulking is used to make the seams in wooden boats or ships watertight, by driving fibrous materials into the wedge-shaped seams between boards. A related process was formerly employed to join sections of cast iron sewerage pipe.

Caulking is also the term to describe the process used to make riveted iron or steel ships and boilers watertight or steamtight.

The same term also refers to the application of flexible sealing compounds to close up gaps in buildings and other structures against water, air, dust, insects, or as a component in firestopping. In the tunnelling industry, caulking refers to the sealing of joints in segmental precast concrete tunnels, commonly by using concrete. 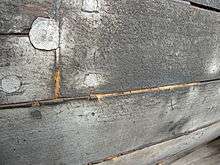 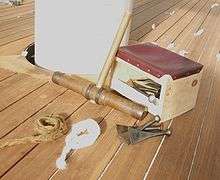 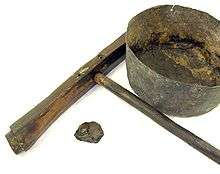 A caulking mallet, tar pot and a piece of petrified tar found on board the 16th century carrack Mary Rose

Traditional caulking (also spelled calking) on wooden vessels uses fibers of cotton and oakum (hemp fiber soaked in pine tar). These fibers are driven into the wedge-shaped seam between planks, with a caulking mallet and a broad chisel-like tool called a caulking iron. The caulking is then covered over with a putty, in the case of hull seams, or else in deck seams with melted pine pitch, in a process referred to as paying, or "calefaction"

Modern marine sealants are frequently used now in place of the pitch, or even to supplant the oakum and cotton itself.

In riveted steel or iron ship construction, caulking was a process of rendering seams watertight by driving a thick, blunt chisel-like tool into the plating adjacent to the seam. This had the effect of displacing the metal into a close fit with the adjoining piece.[1] Originally done by hand much like wooden vessel caulking, pneumatic tools were later employed. With the advent of electric-arc welding for ship construction, steel ship caulking was rendered obsolete.

Caulking of iron and steel, of the same type described above for ship's hulls, was also used by boilermakers in the era of riveted boilers to make the joints watertight and steamtight.[2]

Modern use in construction

Caulk can refer either to the caulking substance or to the process of applying it. Caulking as a term has spread to the building trade, meaning the activity of closing up joints and gaps in buildings. The function of caulking is to provide thermal insulation, control water penetration and noise mitigation.

This is mostly done with ready-mixed construction chemicals sold as caulk such as silicone, polyurethane, polysulfide, sylil-terminated-polyether or polyurethane and acrylic sealant. Unlike construction caulk, which is applied where no building movement is expected, a sealant is made of elastomeric materials that typically allow movement of 25% to 50% of the width of the joint.

One-component sealants are commonly sold in cartridges which are loaded into a pistol-like caulking gun (opening at the side) or barrel gun (opening at the end) for application. During the tool-working time, which varies by chemistry, the bead can be pressed into the joint so that it can bond with the materials on both sides, and also be smoothed. The time it takes for a chemical sealant to become a rubber is known as the curing time and varies by temperature and humidity. 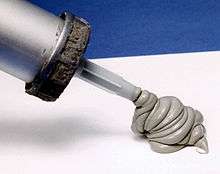 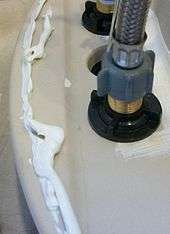 Silicone-based caulk on this upturned bathroom sink will spread smoothly, sealing the gap, when the sink is turned over and installed.

Backer rod, also called backer material or back-up rod, is a flexible foam product used behind caulking to increase elasticity, reduce consumption, force the caulking into contact with the sides of the joint creating a better bond, determine the thickness of the caulking, and define the cross-section hour-glass shape of the caulk. The backer rod also acts as a bond breaker to keep the caulking from sticking to the bottom of the opening called a three-sided bond; with the caulking only adhering to the sides of the opening in an hour-glass shape it can flex more easily and is less likely to tear. Backer rods can also be used to reduce consumption of the caulking by filling part of the joints.

Backer rod is often round and rope-like in shape but many special types and shaped such as square, rectangular and D-shapes are available. High temperature backer rods are available. It is available in different diameters and firmness, and in polyethylene and polyurethane materials. Backer rod also comes in open-cell and closed-cell types of foam.

Open-cell foam is porous so it will let gasses through which could otherwise cause blistering of the sealant. Also, open-cell backer rod allows air to get to the back side of the sealant which accelerates curing when used with air-cured sealants such as silicone. Open-cell rod is more compressible than closed-cell foam and should be 25% larger diameter than the joint.

Closed-cell foam does not absorb water and is impermeable. Closed-cell rods are less compressible and should not be compressed more than 25%. Closed-cell rod will also lose firmness and out-gas if damaged during installation or overcompressed or at sharp bends. The gasses cannot pass through this backer rod and can deform, weaken, and even cause holes (leaks) in the sealant as it escapes. Out-gassing is the reason open-cell backer rod was developed.[3]

Ordinary open-cell foam is used up to 500 °F (260 °C) and ordinary closed-cell can withstand temperatures up to 160 °F (71 °C). Some backer rod may be applied with special tools to make it easier to set the backer rod at the correct and consistent depth. If a joint is too shallow to receive a backer rod bond breaker tapes are available to keep the sealant from adhering to the back of the joint.

According to the Consumer Federation of America, sealing unwanted leaks around homes is an excellent way to cut home energy costs and decrease the household carbon footprint.

Also, sealing cracks and crevices around homes puts less strain on home appliances and can save time, money and hassle by preventing major repairs. Additionally, increasing the lifetime of homes and appliances also puts less waste and pollution into landfills.