For other uses, see Mallet (disambiguation).

A rubber mallet, used in construction, woodworking, and auto-body work 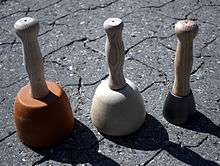 An iron mallet with copper faces. Solid head copper mallets are produced with a round or square head 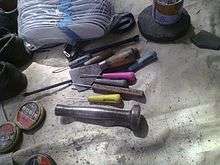 A mallet is a kind of hammer, often made of rubber or sometimes wood, that is smaller than a maul or beetle, and usually has a relatively large head. The term is descriptive of the overall size and proportions of the tool, and not the materials it may be made of, though most mallets have striking faces that are softer than steel.

Tool mallets come in different types, the most common of which are:

Mallets of various types are some of the oldest forms of tools, and have been found in stone age gravesites.

Mallets used as drumsticks are often used to strike a marimba, xylophone, glockenspiel, metallophone, or vibraphone, collectively referred to as mallet percussion. The sticks usually have shafts made of rattan, birch, or fiberglass. Rattan shafts are more flexible than the other materials. Heads vary in size, shape, and material; they may be made of metal, plastic, rubber, or wood, and some are wrapped with felt, cord, or yarn. Heavier heads produce louder sounds, while harder heads produce sharper and louder sounds, with more overtones.

Mallets are commonly used as children's toys. Lightweight wooden mallets are used for peg toys. Toy mallets are also used in games such as Whac-A-Mole. Another type of toy mallet is a plastic mallet made of soft, hollow vinyl, with bellows and a built-in whistle, so that when the mallet is struck, it produces a sharp, chirping sound.

The misuse of wooden mallets in the workplace became a classic gag in the Looney Tunes, Hanna-Barbera, Nickelodeon, and Disney cartoons, including some more recent 3D animations. Characters like Roger Rabbit, Bugs Bunny, Donald Duck, Daffy Duck and Tom and Jerry made use of mallets as part of their arsenal in the Golden Age of animation.

On the British daytime shows TV-AM and GMTV, and in the spinoff children's shows hosted by Timmy Mallet, a game was played called "Mallet's Mallet" where a participant had to associate words in a certain time period. Failing contestants were hit on the head by Mallet, using a soft pink and yellow mallet with black "Mallet's Mallet" writing on both sides. The person who got hit then had a sticking plaster affixed to their head by Mallet.

In anime and manga, it is very common for an angry character to pull out a large mallet, via hammerspace, and attack the person or thing that is angering him/her.