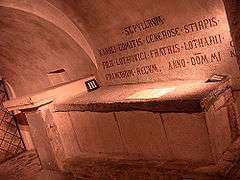 Tomb of Charles in the Basilica of Saint Servatius in Maastricht 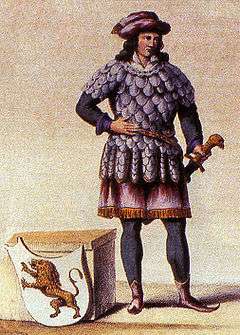 Lithograph printed in circa 1850 with the caption Founder of Brussels, ca 976

Born at Reims in the summer of 953, Charles was the son of Louis IV of France and Gerberga of Saxony and the younger brother of King Lothair.[1] He was a sixth generation descendant of Charlemagne.[1][2] When his father was captured by the Normans and held, both his sons were demanded as ransom for his release.[3] Queen Gerberga would only send Charles, who was then handed over and his father was released into the custody of Hugh Capet.[3]

In or before 976, he accused Lothair's wife, Emma, daughter of Lothair II of Italy, of infidelity with Adalberon, Bishop of Laon.[4] The council of Sainte-Macre at Fismes (near Reims) exonerated the queen and the bishop, but Charles maintained his claim and was driven from the kingdom, finding refuge at the court of his cousin, Otto II. Otto promised to crown Charles as soon as Lothair was out of the way and Charles paid him homage, receiving back Lower Lorraine.[4]

In August 978, Lothair invaded Germany and captured the imperial capital of Aachen, but failed to capture either Otto or Charles. In October, Otto and Charles in turn invaded France, devastating the land around Rheims, Soissons, and Laon. In the latter city, the chief seat of the kings of France, Charles was crowned by Theodoric I, Bishop of Metz. Lothair fled to Paris and was there besieged. But a relief army of Hugh Capet's forced Otto and Charles to lift the siege on 30 November. Lothair and Capet, the tables turned once more, chased the German king and his liege back to Aachen and retook Laon.

Around 979, Charles transferred the relics of Saint Gudula from Moorsel to the Saint Gaugericus chapel in Brussels. This is generally accepted as the time when the city was founded. Charles would construct the first permanent fortification in the city, doing so on that same island.

As he had been a vassal also of Lothair, Charles' acts on behalf of Otto were considered treason and he was thereafter excluded from the throne. On Lothair's death (986), the magnates elected his son Louis V and on the latter's death (987), Hugh Capet. Thus, the House of Capet came to the throne over the disgraced and ignored Charles.[5] Charles' unexceptional marriage and his lack of wealth are two of the reasons he was denied the throne.[5] Charles made war on Hugh, even taking Rheims and Laon. However, on Maundy Thursday[6] (26 March) 991, he was captured, through the perfidy of the Bishop Adalberon, and was imprisoned by Hugh in Orléans, where he died a short while later, in or before 993.[7] He was succeeded as Duke of Lower Lorraine by his son Otto.[7]

In 1666, the sepulchre of Charles was discovered in the Basilica of Saint Servatius in Maastricht. His body appears to have been interred there only in 1001, but that is not the date of his death, as some scholars assumed. Though Charles ruled Lower Lorraine, the Dukes of Lorraine (Upper Lotharingia) counted him as Charles I of Lorraine.

In 970 Charles married Adelaide of Troyes. Together he and Adelaide had: