Charles Correa (born Charles Mark Correa; 1 September 1930 – 16 June 2015) was an Indian architect, urban planner and activist. Credited for the creation of modern architecture in post-Independence India, he was celebrated for his sensitivity to the needs of the urban poor and for his use of traditional methods and materials. [1]

He was awarded the Padma Shri in 1972, and the second highest civilian honour, the Padma Vibhushan given by Government of India in 2006. He was also awarded the 1984 Royal Gold Medal for architecture, by the Royal Institute of British Architects.

Correa began his higher studies at St. Xavier's College, Mumbai at the University of Bombay (now Mumbai) went on to study at the University of Michigan in Ann Arbor (1949–53) and the Massachusetts Institute of Technology (MIT) in Cambridge, Massachusetts (1953–55). In 1958 he established his own Mumbai based professional practice.[4] He died on 16 June 2015 in Mumbai following a brief illness.[5] 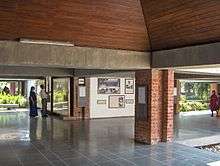 Correa was a major figure in contemporary architecture around the world. With his extraordinary and inspiring designs, he played a pivotal role in the creation of an architecture for post-Independence India. All of his work – from the carefully detailed memorial Mahatma Gandhi Memorial Museum at the Sabarmati Ashram in Ahmedabad to Kanchanjunga Apartment tower in Mumbai, the Jawahar Kala Kendra in Jaipur, the planning of Navi Mumbai, MIT's Brain and Cognitive Sciences Centre in Cambridge, and most recently, the Champalimad Centre for the Unknown in Lisbon, places special emphasis on prevailing resources, energy and climate as major determinants in the ordering of space. He designed the Parumala Church as well.

From 1970–75, he was Chief Architect for New Bombay (Navi Mumbai), an urban growth center of 2 million people across the harbour from the existing city of Mumbai, here along with Shirish Patel and Pravina Mehta he was involved in extensive urban planning of the new city.[8] In 1985, Prime Minister Rajiv Gandhi appointed him Chairman of the National Commission on Urbanization. 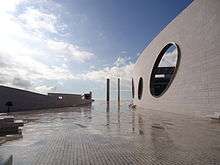 In 1984, he founded the Urban Design Research Institute in Bombay, dedicated to the protection of the built environment and improvement of urban communities. During the final four decades of his life, Correa has done pioneering work in urban issues and low-cost shelter in the Third World.

From 2005 until his 2008 resignation Correa was the Chairman of the Delhi Urban Arts Commission.

On 18 December 2011, the eve of the Golden Jubiliee of Liberation of Goa, Correa was bestowed with Goa's highest civilian honour, the Gomant Vibhushan.[9]

In 2013, the Royal Institute of British Architects held an retrospective exhibition, "Charles Correa – India's Greatest Architect", about the influences his work on modern urban Indian architecture.[8][10]

One of Correa's most important later projects is the new Ismaili Centre in Toronto, Canada which is located in the midst of formal gardens and surrounded by a large park designed by landscape architect Vladimir Djurovic. It shares the site with the Aga Khan Museum designed by Fumihiko Maki.[11]

The Champalimaud Foundation Centre in Lisbon was inaugurated on 5 October 2010 by the Portuguese President, Cavaco Silva.[12][13]