This article is about the metropoliton area in Rajasthan, India. For its namesake district, see Jaipur district. For other uses, see Jaipur (disambiguation).

i/ˈdʒaɪpʊər/)[2][3][4] is the capital and largest city (in term of size) of the Indian state of Rajasthan in Northern India. It was founded on 18 November 1726 by Maharaja Jai Singh II, the ruler of Amer after whom the city is named.[5] As of 2011, the city has a population of 3.1 million, making it the tenth most populous city in the country. Jaipur is also known as the Pink City of India.[6]

Located 260 km from the Indian capital New Delhi, Jaipur forms a part of the west Golden Triangle tourist circuit along with Agra (240 km).[7] Jaipur is a popular tourist destination in India and serves as a gateway to other tourist destinations in Rajasthan such as Jodhpur (348 km), Jaisalmer (571 km) and Udaipur (421 km). 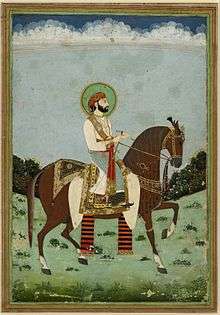 The city of Jaipur was founded in 1726 by Jai Singh II, the Raja of Amer who ruled from 1688 to 1758. He planned to shift his capital from Amer, 11 km from Jaipur to accommodate the growing population and increasing scarcity of water.[5] Jai Singh consulted several books on architecture and architects while planning the layout of Jaipur. Under the architectural guidance of Vidyadhar Bhattacharya, Jaipur was planned based on the principles of Vastu shastra and Shilpa Shastra.[8] The construction of the city began in 1726 and took four years to complete the major roads, offices and palaces. The city was divided into nine blocks, two of which contained the state buildings and palaces, with the remaining seven allotted to the public. Huge ramparts were built, pierced by seven fortified gates.[5]

During the rule of Sawai Ram Singh, the city was painted pink to welcome the Prince of Wales, later Edward VII, in 1876.[9] Many of the avenues remained painted in pink, giving Jaipur a distinctive appearance and the epithet Pink city.[10] In the 19th century, the city grew rapidly and by 1900 it had a population of 160,000. The wide boulevards were paved and its chief industries were the working of metals and marble, fostered by a school of art founded in 1868. The city had three colleges, including a Sanskrit college (1865) and a girls' school (1867) opened during the reign of the Maharaja Ram Singh II.[11][12]

The city was planned according to Indian Vastu shastra by Vidyadhar Bhattacharya in 1727.[17] There are three gates facing east, west, and north. The eastern gate is called Suraj pol (sun gate), the western gate is called Chand pol (moon gate) and the northern gate faces the ancestral capital of Amer.[8][18]

The city is unusual among pre-modern Indian cities in the regularity of its streets, and the division of the city into six sectors by broad streets 34 m (111 ft) wide. The urban quarters are further divided by networks of gridded streets. Five quarters wrap around the east, south, and west sides of a central palace quarter, with a sixth quarter immediately to the east. The Palace quarter encloses the Hawa Mahal palace complex, formal gardens, and a small lake. Nahargarh Fort, which was the residence of the King Sawai Jai Singh II, crowns the hill in the northwest corner of the old city.[19]

Jaipur has a hot semi-arid climate under the Köppen climate classification "BSh",[20] receiving over 650 millimetres (26 in) of rainfall annually but most rains occur in the monsoon months between June and September. Temperatures remain relatively high during summer from April to early July having average daily temperatures of around 30 °C (86 °F). During the monsoon there are frequent, heavy rains and thunderstorms, but flooding is not common. The winter months of November to February are mild and pleasant, with average temperatures ranging from 10–15 °C (50–59 °F) and with little or no humidity and cold waves lead to temperatures near freezing.[21]

Jaipur Municipal Corporation is responsible for maintaining the city's civic infrastructure and carrying out associated administrative duties. The Municipal Corporation is headed by a mayor.[24] There are 91 wards and each ward is represented by an elected member. Jaipur Development Authority (JDA) is the nodal government agency responsible for the planning and development of Jaipur.[25] Jaipur consists of two parliamentary constituencies Jaipur and Jaipur Rural.[26]

In addition to its role as the provincial capital, educational, and administrative centre, the economy of Jaipur is fuelled by tourism, gemstone cutting, the manufacture of jewellery and luxury textiles, and information technology.[27] Three major trade promotion organisations have their offices in Jaipur. These are: Federation of Indian Chambers of Commerce & Industry, (FICCI) the PHD Chamber of Commerce and Industry (PHDCCI) and the Confederation of Indian Industry (CII) which has its regional offices here. In 2008, Jaipur was ranked 31 among the 50 Emerging Global Outsourcing cities.[28] Jaipur Stock Exchange is one of the regional stock exchanges in India and was founded in 1989.[29] Jaipur is a major hub for arts and crafts. It has many traditional shops selling antiques, jewellery, handicrafts, gems, bangles, pottery, carpets, textiles, leather and metal products. Jaipur is one of India's largest manufacturers of hand-knotted rugs.[30][31] Jaipur leg, a rubber-based prosthetic leg for people with below-knee amputations, was designed and is produced in Jaipur.[32][33]

Jaipur has many cultural sites like Jawahar Kala Kendra formed by Architect Charles Correa and Ravindra Manch. Government Central Museum hosts several arts and antiquities. There is a government museum at Hawa Mahal and an art gallery at Viratnagar. There are statues depicting Rajasthani culture around the city.[36][37] Jaipur has many traditional shops selling antiques and handicrafts. The prior rulers of Jaipur patronised a number of arts and crafts. They invited skilled artisans, artists and craftsmen from India and abroad who settled in the city. Some of the crafts include bandhani, block printing, stone carving and sculpture, tarkashi, zari, gota-patti, kinari and zardozi, silver jewellery, gems, kundan, meenakari and jewellery, Lakh ki Chudiya, miniature paintings, blue pottery, ivory carving, shellac work and leather ware.[6][19]

Jaipur has its own performing arts. The Jaipur Gharana for Kathak and Ghoomar are popular folk dance styles.[38][39][40] Tamasha is an art form where Kathputli puppet dance is shown in play form.[41] Jaipur has four majors fairs and festivals namely Elephant Festival, Gangaur, Kite Festival Jaipur and Teej. Jaipur is also famous for the Jaipur Literature Festival, the world's largest free literature festival in which country-wide authors, writers and literature lovers participate.[42]

The main language of Jaipur is Rajasthani. Dhundhari, Marwari, Hindi and English are also spoken in the city.[41]

Jaipur is a major tourist destination in India forming a part of the Golden Triangle. In the 2008 Conde Nast Traveller Readers Choice Survey, Jaipur was ranked the 7th best place to visit in Asia.[46] According to TripAdvisor's 2015 Traveller's Choice Awards for Destination, Jaipur ranked 1st among the Indian destination for the year.[47] The Presidential Suite at the Raj Palace Hotel, billed at US$45,000 per night, was listed in second place on CNN's World's 15 most expensive hotel suites in 2012.[48]

The main cricket stadium in the city, Sawai Mansingh Stadium, has a seating capacity of 23,185 and has hosted national and international cricket matches.[54] Sawai Mansingh Indoor Stadium, Chaugan Stadium and Railway Cricket Ground are the other sporting arenas in the city. The city is represented in the IPL by Rajasthan Royals[55] and Pro Kabaddi League by Jaipur Pink Panthers.[56]

Public and private schools in Jaipur are governed by the Central Board of Secondary Education or Rajasthan Board of Secondary Education and follow a "10+2" plan. Languages of instruction include English and Hindi. Admission to graduation colleges in Jaipur, many of which are affiliated to Rajasthan Technological University, is through the RPET. Major institutions include National Institute of Agricultural Management, University of Rajasthan,[57] Indian Institute of Health Management Research, Malviya National Institute of Technology Jaipur,[58][59] Jaipur National University,[60][61][62][63][64][65] Manipal University and IIS University.[66][67] 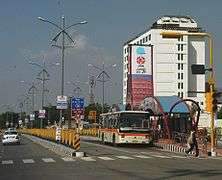 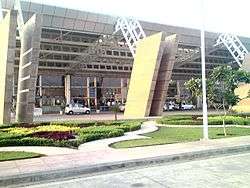 Jaipur BRTS was approved by the government in August 2006. Jaipur BRTS is managed by JCSTL, a special purpose vehicle formed by Jaipur Development Authority and Jaipur Nagar Nigam. In Phase I, two corridors have been proposed: a "North-South Corridor" from Sikar Road to Tonk Road and an "East-West Corridor" from Ajmer Road to Delhi Road. A section of the North-South Corridor from bypass near Harmada to Pani Pech became operational in 2010.[70][70][71]

Jaipur is the headquarters of North Western Zone of Indian Railways.[72] Jaipur Railway Station is well connected to all major cities of India like Delhi, Mumbai, Kolkata, Chennai, Bengaluru, Hyderabad, and Ahmedabad. Other stations include Gandhinagar, Durgapura, Jagatpura, Ninad Benad and Sanganer.

Jaipur Metro commenced commercial operation on 3 June 2015.[73] Phase-1A is operational between Mansarovar and Chandpole consisting of 9 stations namely Mansarovar, New Aatish Market, Vivek Vihar, Shayam Nagar, Ram Nagar, Civil Line, Railway Station, Sindhi Camp and Chandpole.[74] Phase-1B is under construction. The estimated cost of the project is ₹550 crore (US$82 million)[75] and it is expected to be completed by 2018.