Charles William Sandman Jr. (October 23, 1921 – August 26, 1985) was an American Republican Party politician who represented New Jersey's 2nd congressional district in the United States House of Representatives and was the party's candidate for Governor of New Jersey in 1973.

Sandman was born in Philadelphia, Pennsylvania. He graduated from Cape May High School, attained a bachelor's degree from Temple University in Philadelphia, and a law degree from Rutgers School of Law–Newark. Sandman married Marion L. Cooney of Philadelphia and produced six children; Carol, William, Marion, Robert, Charles and Richard.

Sandman died on August 26, 1985, in Cape May Court House, New Jersey. At the time of his death, he was a resident of the Erma section of Lower Township, New Jersey,[1] and was interred in Cold Spring Presbyterian Cemetery in Cape May, New Jersey. 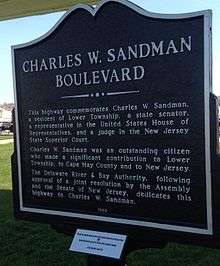 Plaque at Cape May ferry terminal

Sandman served in the United States Army Air Corps as a navigator during World War II, and spent seven months as a prisoner of war in Germany after being shot down.[1]

In 1973, the conservative Sandman ran for Governor, defeating moderate incumbent Republican William T. Cahill in the Republican primary election in a stunning victory.[2] In the general election, Sandman lost to Democrat Brendan Byrne in a landslide, following the pattern where New Jersey would often elect moderate Republicans to statewide office but consistently reject more conservative Republicans. 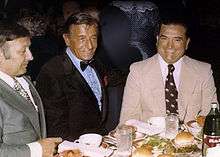 In 1974, Sandman was serving on the House Judiciary Committee when it considered articles of impeachment against President Richard Nixon. Unlike most Republicans on the committee, Sandman defended Nixon almost throughout the proceedings. At one point during the hearings, Sandman angrily told his New Jersey colleague on the committee, chairman Peter Rodino, "Please, let us not bore the American public ... you have your 27 votes", referring to the 27 affirmative votes for the first article of impeachment against Nixon.

In the 1974 Congressional elections, Republicans suffered generally because of the Watergate scandal that had by the time of the election forced Nixon to resign. Although Sandman announced that he would vote for impeachment on the House floor after the release of the "smoking gun" transcript (as did all of the Republicans who had voted against the articles in committee), his reputation was severely tarnished by his performance in the televised hearings. He was soundly defeated by Democrat William J. Hughes, his opponent in 1974. Following his defeat in his reelection bid for Congress, Sandman was approached by Vice President Nelson Rockefeller to join the Ford Administration in various capacities including an Ambassadorship of his choosing, Sandman declined and instead opted to accept Governor Thomas Kean's invitation to be appointed to the bench of the Superior Court Of New Jersey.