Charles Whitlow "Charlie" Norwood, Jr., D.D.S. (July 27, 1941 – February 13, 2007) was an American politician and dentist, serving as a Republican member of the United States House of Representatives from 1995 until his death in 2007. At the time of his death, Norwood was the Representative of the 10th District of Georgia.[1]

Born in Valdosta, Georgia, Norwood graduated from Baylor School, then a military academy, in Chattanooga, TN. He then attended Georgia Southern University in Statesboro, GA and Georgetown University in Washington, D.C.. Before entering the House, Norwood operated a successful dentistry practice in Augusta.

He married his wife, Gloria, in 1962. They had two sons, Charles and Carlton, and lived in Evans, Georgia; a suburb of Augusta.

Norwood served as a Captain in the United States Army from 1967 to 1969, beginning with an assignment to the U.S. Army Dental Corps at Sandia Army Base in Albuquerque, New Mexico. In 1968 he was transferred to the Medical Company (Company B-Med) of the 173rd Airborne Brigade in Vietnam, and served a combat tour at Quin Yon, An Khe, and LZ English at Bong Son. During his tour, he participated in experimental military dental practices that are now standard procedure for the armed forces. Norwood was one of the first participants in the Army's outreach program that delivered dentists to forward firebases in lieu of transferring patients to rear treatment areas. He provided some of the first field-based dental treatment of military guard dogs, and assisted in non-dental trauma care in Mobile Army Surgical Hospitals.

In recognition of his service under combat conditions, Norwood was awarded the Combat Medical Badge and two Bronze Stars. After Vietnam, Norwood was assigned to the Dental Corps at Fort Gordon, Georgia, where he served until his discharge in 1969. He remained a member of the American Legion, the Veterans of Foreign Wars, and the Military Order of the World Wars until his death.

In late 1993, Norwood sold his dental practice to run for Congress in the 1994 elections as a Republican in the Augusta-based 10th District. In that election, he routed freshman Democratic incumbent Don Johnson by a shocking 31-point margin—one of the largest margins of defeat of the 1994 election cycle. He became the first Republican to represent his northeastern Georgia district since Reconstruction.

Norwood was nearly defeated in 1996, winning by only four points. He easily turned back spirited challenges in 1998 and 2000. However, in the 2000s round of redistricting, the Democratic-controlled state legislature crafted a congressional map designed to elect seven Democrats and six Republicans; at the time Georgia's congressional delegation consisted of eight Republicans and five Democrats. In the process, the legislature renumbered Norwood's district as the 9th District and shifted most of Augusta—which had been the heart of the district and its predecessors for over a century—to the newly created 12th District. To make up for the loss in population, Norwood's district picked up some more Republican territory in the North Georgia mountains. Norwood was reelected from this now heavily Republican district with 73 percent of the vote.

In 2004, Norwood received 74 percent of the vote against Democrat Bob Ellis. In 2006, his district was renumbered the 10th once again, and was pushed slightly to the west, absorbing Athens in the process. Athens was home to Democratic 12th District Congressman John Barrow, and Barrow was forced to move to Savannah rather than face certain defeat. Norwood was handily reelected, taking 68 percent of the vote against Democrat Terry Holley.

Norwood was a staunch supporter of tight immigration control, and "called for putting nearly 40,000 troops on the U.S.-Mexico border. He co-wrote a provision to the recent Deficit Reduction Act that bars illegal aliens from getting Medicaid."[2]

The Washington Post wrote the following in a summary of his career:

In 2004, Norwood underwent a lung transplant due to idiopathic pulmonary fibrosis. In December 2006, he underwent chemotherapy for cancer, which had spread to his liver. The disease was believed to be caused by the immunosuppressants Norwood had to take due to the lung transplant. After the reconvening of Congress in January 2007, Norwood missed most of the sessions due to weakness from the chemotherapy.[3] During the State of the Union address on January 23, 2007, President George W. Bush noted Congressman Norwood's absence from the Hall of the House and extended his thoughts for a speedy recovery.[4]

On February 7, Norwood's office announced that he was forgoing further treatment for his cancer, and would be returning to Augusta in order to receive in-home hospice care.[5] 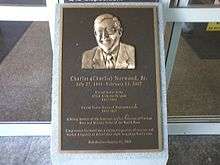 This plaque commemorates the re-dedication of the Charlie Norwood VA Medical Center and sits at the main entrance of the "uptown" facility.

Norwood died nearly one week later, on February 13. At approximately 2:02 PM Eastern time on the day of his death, a few moments of silence were observed for Norwood on the House floor. This moment of silence was repeated at 2:21 PM, at the behest of a delegation of Congressmen from Georgia. Norwood was survived by his wife, 2 children, and 4 grandchildren. President Bush said that he and his wife Laura were saddened by Norwood's death. "Charlie was a good friend and a strong, spirited legislator who always stuck to his principles, remembering that his duty was to represent the best interests of the citizens of his district," the President said in a written statement released by the White House.

In tribute to his life and service, The Veterans Affairs Medical Center in Augusta, GA was rededicated to bear his name. On January 15, 2008 the center officially became known as the Charlie Norwood VA Medical Center.[6]