i/tʃɪˈwɑːwɑː/ (Spanish: chihuahueño)[1] is the smallest breed of dog and is named for the state of Chihuahua in Mexico. Chihuahuas come in a wide variety of sizes, head shapes, colors, and coat lengths.

A Techichi, likely the ancestor of Chihuahuas.

The Chihuahua's history is puzzling and there are many theories surrounding the origin of the breed. Both folklore and archaeological finds show that the breed originated in Mexico. The most common and most likely theory is that Chihuahuas are descended from the Techichi, a companion dog favored by the Toltec civilization in Mexico.[2] No records of the Techichi are available prior to the 9th century, although dog pots from Colima, Mexico, buried as part of the western Mexico shaft tomb tradition which date back to 300 BC are thought to depict Techichis.[3] It is probable that earlier ancestors were present prior to the Mayans as dogs approximating the Chihuahua are found in materials from the Great Pyramid of Cholula, predating 1530 and in the ruins of Chichen Itza on the Yucatán Peninsula.[2]

In fact, wheeled dog toys representing both the "deer head" and "apple head" varieties of Chihuahua have been unearthed across Mesoamerica from Mexico to El Salvador. The earliest of these were found at Tres Zapotes in Veracruz, Mexico, which date to 100 AD,[4] indirect evidence that the breed was in Mexico over 1400 years before the first Europeans arrived.[4]

Dog effigy pots dating to around 1325 AD discovered in Georgia and Tennessee also appear to represent the Chihuahua.[5] In 1850, a pot featuring the "deer head" variety of Chihuahua was unearthed in old ruins at Casas Grandes in the Mexican state of Chihuahua, which dates from 1100–1300 AD showing the long history of the breed at this site,[4] although most artifacts relating to its existence are found around Mexico City. It has been argued that these pots arrived with survivors from the Casas Grandes site in Chihuahua, Mexico, after it was attacked and destroyed around 1340 AD.

Hernan Cortés wrote, in a 1520 letter, that the Aztecs raised and sold the little dogs as food.[6] Colonial records refer to small, nearly hairless dogs at the beginning of the 19th century, one of which claims 16th-century Conquistadores found them plentiful in the region later known as Chihuahua.[7]

Chihuahuas are the smallest breed recognized by some kennel clubs.[8]

There are two varieties of Chihuahua – the Smooth Coat (short haired) and the Long Coat. Both the Smooth and the Long Coats have their special attractions, are equally easy to keep clean and well groomed.[9] The UK Kennel Club considers smooth and long coated Chihuahuas two distinct breeds, matings between the two are not eligible for KC registration.

Dogs of either coat type may be identified as either "apple head" or "deer head" Chihuahuas, particularly in the United States. Apple heads have rounded heads, close-set eyes, and relatively short ears and legs. Deer heads have flat-topped heads, more widely set eyes, larger ears, and longer, more slender legs. While deer heads were popular in the mid-twentieth century, current breed standards defined by registries such as the Chihuahua Club of America and American Kennel Club specify the apple head conformation.[10]

Breed standards for this dog do not generally specify a height; only a weight and a description of their overall proportions. Generally, the height ranges between 15 and 23 cm (6 and 9 in);[8] however, some dogs grow as tall as 30 to 38 cm (12 to 15 in).[11] Both British and American breed standards state that a Chihuahua must not weigh more than 2.7 kg (6 lb) for conformation.[8] However, the British standard also states that a weight of 1.8–2.7 kg (4–6 lb) is preferred. A clause stating that 'if two dogs are equally good in type, the more diminutive one is preferred' was removed in 2009.[12] The Fédération Cynologique Internationale (FCI) standard calls for dogs ideally between 1.5 and 3.0 kg (3.3 and 6.6 lbs.), although smaller ones are acceptable in the show ring.[13]

Pet Chihuahuas (that is, those bred or purchased as companions rather than show dogs) often range above these weights, even above ten pounds if they have large bone structures or are allowed to become overweight.[8] This does not mean that they are not purebred Chihuahuas; they do not meet the requirements to enter a conformation show. Oversized Chihuahuas are seen in some of the best, and worst, bloodlines. Chihuahuas do not breed true for size, and puppies from the same litter can mature drastically different sizes from one another. As well, larger breeding females are less likely to experience dystocia. Typically, the breed standard for both the long and short coat chihuahua will be identical except for the description of the coat.[14] Chihuahuas have large, round eyes and large, erect ears, set in a high, dramatically rounded skull.[8]

The Kennel Club in the United Kingdom and the American Kennel Club in the United States recognize only two varieties of Chihuahua: the long-coat, and the smooth-coat, also referred to as short-haired.[15] They are genetically the same breed. The term smooth-coat does not mean that the hair is necessarily smooth, as the hair can range from having a velvet touch to a whiskery feeling. Long-haired Chihuahuas are actually smoother to the touch, having soft, fine guard hairs and a downy undercoat, which gives them their fluffy appearance. Unlike many long-haired breeds, long-haired Chihuahuas require no trimming and minimal grooming. Contrary to popular belief, the long-haired breed also typically sheds less than its short-haired counterparts. It may take up to three or more years before a full long-haired coat develops.

Chihuahuas come in virtually any color combination, from solid to marked or splashed,[15] allowing for colors from solid black to solid white, spotted, sabled, or a variety of other colors and patterns. Colors and patterns can combine and affect each other, resulting in a very high degree of variation. Common colors are fawn, red, cream, chocolate, brown, mixed, white, and black. No color or pattern is considered more valuable than another.

The merle coat pattern, which appears mottled, is not traditionally considered part of the breed standard. In May 2007, The Kennel Club decided not to register puppies with this coloration due to the health risks associated with the responsible gene, and in December of that year formally amended the Breed Standard to disqualify merle dogs.[16] The Fédération Cynologique Internationale, which represents the major kennel clubs of 84 countries, also disqualified merle.[13] Other countries' kennel clubs, including Canada, Australia, New Zealand, and Germany, have also disqualified merle. However, in May 2008, the Chihuahua Club of America voted that merles would not be disqualified in the United States, and would be fully registrable and able to compete in American Kennel Club (AKC) events. Opponents of merle recognition suspect the coloration came about by modern cross-breeding with other dogs, and not via natural genetic drift.

How a Chihuahua turns out depends mightily on the genetic temperament of his parents and grandparents.[17] Chihuahuas can be easily provoked to attack, and are therefore generally unsuitable for homes with small children.[18] The breed tends to be fiercely loyal to one particular person and in some cases may become over protective of the person, especially around other people or animals. They do not always get along with other breeds,[18] and tend to have a "clannish" nature, often preferring the companionship of other Chihuahuas or Chihuahua mixes over other dogs.[19] These traits generally make them unsuitable for households with children who are not patient and calm.[15] If properly managed by older children, 13 and up, they can adapt to this kind of living with a dedicated owner. The temperament of its owner can make a difference in the temperament of the pup.

Chihuahuas love their dens and will often burrow themselves in pillows, clothes hampers, and blankets. They are often found under the covers or at the bottom of the bed, deep in the dark and safety of what they perceive as their den. Chihuahuas also enjoy time in sunlight.[20] 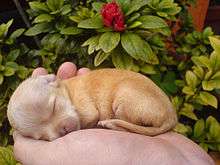 This breed requires expert veterinary attention in areas such as birthing and dental care. Dental care is a must for these smallest dogs, whose jaw size makes for weaker teeth.

Chihuahuas, and other toy breeds, can be affected by hydrocephalus.[21] Chihuahua puppies with hydrocephalus have an abnormally large head, are lethargic and do not grow at the same pace as their siblings. A true case of hydrocephalus can be diagnosed by a veterinarian, though the prognosis is grim.

Apple-headed chihuahuas can have moleras, or a soft spot in their skulls, and they are the only breed of dog to be born with an incomplete skull. This is not a defect; it is a normal adaptation facilitating the passage through the birth canal and growth and development of the domed type of forehead. The molera is predominant in the apple heads and is present in nearly all Chihuahua puppies. The molera fills in with age, but great care needs to be taken during the first six months until the skull is fully formed. Some moleras do not close completely and require extra care to prevent injury.[22]

Chihuahua puppies can be at risk for hypoglycemia, or low blood sugar. Signs of hypoglycemia include lethargy, sleepiness, uncoordinated walking, unfocused eyes and spasms of the neck muscles or head pulling back or to the side, fainting and seizures. Hypoglycemia can be avoided with adequate nutrition and frequent feedings, especially for chihuahuas who are younger, smaller or leaner. Chihuahua owners should have a simple sugar supplement on hand to use in emergencies, such as Nutri-Cal, Karo syrup and honey. These supplements can be rubbed on the gums and roof of the mouth to rapidly raise the blood sugar level.

On the other hand, as with any dog, owners should take care not to overfeed their chihuahua, since obesity can result in increased rates of joint injuries, tracheal collapse, chronic bronchitis, and shortened life span.

As in other breeds with large protruding eyes, Chihuahuas are prone to eye infections or eye injury. The eyes may water in response to dry air, dust or air-borne allergens.

Collapsed trachea is a health concern that is characteristic of the chihuahua breed.[23]

Chihuahuas may tremble or shiver when stressed, excited or cold. Chihuahuas, especially the short-coat variety, are less tolerant of cold than larger breeds, and require a sweater and/or boots in cold weather. They will seek warmth in sunshine, under blankets, or on furniture, or human laps.

The average lifespan for a Chihuahua is between 12 and 20 years.[24]

Chihuahuas are also known for luxating patella, a genetic condition that can occur in all dogs. In some dogs, the ridges forming the patellar groove are not shaped correctly and a shallow groove is created, causing the patella to luxate or slip out of place, sideways. The knee cap sliding across the bony ridges of the femur can cause some pain. The affected chihuahua will hold its leg flexed, and foot off the ground until the quadriceps muscle relaxes and lengthens, after which the animal feels no discomfort and continues with activity.

Chihuahuas are also prone to some heart-related disorders, such as heart murmurs and pulmonic stenosis, a condition in which the blood outflow from the heart's right ventricle is obstructed at the pulmonic valve.

Chihuahuas and chihuahua/Chinese Cresteds mixes have rated highly in the World's Ugliest Dog Contest, including a purebred chihuahua named Princess Abby (winner of the 2010 contest) and a crossbreed named Yoda (the 2011 winner).