For other uses of the term "chimera" (and variants), see Chimera (disambiguation).

Chimaira /kaɪˈmɪərə/ was an American heavy metal band from Cleveland, Ohio. Formed in 1998, the group was a notable member of the New Wave of American Heavy Metal scene.[3] The band's name is derived from the word Chimera, a monstrous creature in Greek mythology. Throughout its history, the band endured numerous line-up changes, leaving vocalist Mark Hunter as the only constant member. The band dissolved in 2014.

Chimaira was founded during 1998 by guitarist Jason Hager, and vocalist Mark Hunter. The pair contacted friends and recruited Jason Genaro on drums and Andrew Ermlick on bass to complete the required positions for a line-up.[4]

After a few practices, the four decided that the band needed to thicken their sound and Ermlick recommended that Rob Arnold, a former bandmate from his time in Common Thread, could be recruited into the band as a guitarist. Arnold's band at the time, Sanctum had recently split, and he was available to join Chimaira. By 1999, Arnold joined the band soon after as lead guitarist to which Hager was then moved down to play rhythm.[4]

The band recorded its first demo in January 1999, and during the recording, Arnold recommended to Hunter and Hager that they replace Genaro with Arnold's former drummer Andols Herrick in the band Sanctum. After observing a cassette recording featuring Herrick's percussion, the band agreed to replace Genaro in favor of Herrick. Herrick then came along to the studio with the other four and recorded the drums for the demo the very next day.[4]

The band spent much of 1999 doing various live shows around the United States, and during that year Andrew Ermlick left the band to concentrate on his college studies, and was replaced by Rob Lesniak.[4]

The band recorded a second demo during that year, and it began to receive widespread airplay on several college radio stations around the area. After landing a spot performing "Dead Inside" on the short lived USA Network show Farmclub.com, Chimaira was signed to Roadrunner Records.[4]

Eventually, the band recorded their debut EP, This Present Darkness, which was released in 2000 via independent label East Coast Empire, and charted in the top 10 at Metal Radio. Shortly after the release of TPD, Chimaira aligned with manager and A&R scout Thom Hazaert (who would go on to run prominent independent labels Corporate Punishment Records and THC : MUSIC), a longtime friend of sampler Chris Spicuzza, and continued to tour the US, playing consistently with bands including Hatebreed and God Forbid. The band recorded demo versions of several new tracks including "Dead Inside" (which the band performed on Farm Club and would go on to become a fan favorite), "Severed", and "Taste My...", as well as a cover of The Cure's "Fascination Street", which Hazaert shopped, eventually gaining interest from several major labels. During this time, the band also contributed a cover of the Accept classic "Balls to the Wall" to the ECW Wrestling album Anarchy Rocks Vol. 2.

The band went on to sign with Roadrunner Records and quickly recorded its debut album Pass out of Existence in 2001 with Producer Mudrock. By this time Jim LaMarca was now bassist and Chris Spicuzza was handling all electronics duties. Shortly after the release of the album and the tour that was to follow, Jason Hager left the band when he discovered he was going to become a father. Matt DeVries, from Cleveland's Ascension, was recruited to take over as rhythm guitarist. Released October 2, 2001, Pass out of Existence would also feature a guest appearance from Deftones' guitarist Stephen Carpenter on the track "Rizzo".

The band returned home in late 2002 to begin writing and recording its next full-length album, The Impossibility of Reason. The making of the album was documented and later seen on their debut DVD release called The Dehumanizing Process. After the release and ensuing tours, drummer Andols Herrick decided to leave the band. As evidenced in the DVD documentary, Herrick appeared to be unenthusiastic about constantly being on the road. He returned home to attend college to obtain a music degree.

Chimaira eventually welcomed Ricky Evensand as its new drummer. Evensand, hailing from Sweden, was probably most notable for being a part of Soilwork for a short time. Evensand's stay in Chimaira was relatively short-lived. Due to visa problems and his temperamental nature, Evensand eventually left the band. Going on advice from Slayer guitarist Kerry King, Hunter contacted Kevin Talley, an experienced death metal drummer who had previously been in the bands Dying Fetus and Misery Index. With Talley on board, the band finished its remaining tour dates before returning home for some downtime. They soon began the writing and recording process on their next album. Songs from the album were featured on MythBusters for the episode "Talking to Plants".

By the first quarter of 2005, the band had finished most of its next release and began to tour once again. The self-titled album, the first (and only) one featuring Talley, was released in August 2005 while the band was taking part in the inaugural Sounds of the Underground tour. Hunter and DeVries had also taken part in another musical project that year, Roadrunner Records' twenty-fifth anniversary CD entitled The All-Star Sessions. Also taking part in the recording of several songs was former drummer Andols Herrick. These recording sessions reignited Herrick's interest of being in a full-time band.

In 2006, the band was released from its contract with Roadrunner Records and eventually signed with Ferret Records for United States distribution. The band also inquired a deal with Nuclear Blast for international operations. The band was said to be excited about its new deals, and its fourth full-length studio album Resurrection, which was released on March 6, 2007. The band has stated they felt "rejuvenated" after its split with Roadrunner and the readmission of Herrick on drums. The only downside of this happy event was that the band decided to call off the Eastpack Antidote tour with Soilwork, Sonic Syndicate and Caliban. Chimaira was replaced by Dark Tranquillity. In 2008, Chimaira joined Brendon Small on the Dethklok tour 2008 as a guest appearance.

Before the release of the album, the band had been posting short clips on the webpage from the upcoming album, which was written in Cleveland, Ohio with producer Ben Schigel, who previously produced the band's album The Impossibility of Reason and their self-titled album. The new album, entitled The Infection, is mixed by Zeuss, who mixed and produced albums for Hatebreed and Shadows Fall. Chimaira recently stated that they are pushing for an April 21, 2009 release date on the new album. At its annual Chimaira Christmas show on December 30, 2008, they debuted a new song entitled "Secrets of the Dead."[5]

I think that we’ve been a band that over the past fourteen years encapsulates the best elements of heavy metal. In our music you can hear elements of death metal in one instant only to hear influences from classic thrash metal the next moment. Chimaira has always been a hybrid metal band and we’ll continue doing that. We’re a band that never quits, no matter the odds.

— Mark Hunter, on the essence of Chimaira [6]

The first single of the album "Secrets of the Dead" was released March 3, 2009. The Infection was released worldwide on April 21, 2009 and debuted at number 30 on the Billboard 200. During a number of European tour dates supporting The Infection, Chimaira had Emil Werstler of Dååth filling in for Matt DeVries, as DeVries' girlfriend had their first child.

The 10th annual Chimaira Christmas show was held at the House of Blues in Cleveland Ohio on December 27, 2009 and was filmed for a live DVD titled Coming Alive, which was released in 2010.

In late 2010, bassist Jim LaMarca retired from the band. Chimaira released the following statement regarding his departure "After a decade of good times and achievements, our friend and band mate Jim LaMarca [bass] has decided to retire from CHIMAIRA. We wish him nothing but the best as he settles in and starts a family. As for seeking a replacement… we'll cross that bridge down the line. In the meantime, consider it 'business as usual' with the CHIMAIRA you know and love."[7]

Chimaira finished recording their 6th album in March 2011,[9] expected to be released in August 2011.[10] Also in March, Chimaira released a cover of The Troggs' "Wild Thing" as a single on YouTube and iTunes,[11][12] in response to the "Charlie Sheen phenomenon."[13]

On April 5, 2011, keyboardist and programmer Chris Spicuzza announced he would be leaving the band (a decision he made in January), citing a "negative environment" and the general state of the music industry. He also announced his next project, a mobile gaming startup called IRL Gaming.[14] Spicuzza did not contribute to the new album.[14]

On April 13, drummer Andols Herrick announced that he too would be leaving the band due to differences.[15] He was asked to leave by the other members of the band. Andols has technically been out of the band since December 2010 (prior to Chimaira Christmas 11). It was not announced until April 2011, however. Herrick was asked to rejoin the band, but he declined. He has said he looks forward to moving on with other musical projects. He said that there is no bad blood between the band and himself, and that they all remain friends. Herrick did not contribute to the new album, however he was around during the time of the song-writing and assures the fans through his Facebook page that the new album is sounding pure as ever. On May 28, at Peabody's in Cleveland, OH, the new album was revealed to be titled The Age of Hell that was met with the debut live performance of the song "Trigger Finger" which will be included on the record.

The Age Of Hell is a transitional album. The songs on it aren’t that bad, but the fire and the passion simply wasn’t there. It was more about holding on to something that was falling apart and recording those emotions. I think it’s still a decent metal album, but Crown Of Phantoms is really special to me, because of all the fire and passion. The Age Of Hell was basically me and Rob (Arnold) recording an album with a stand-in drummer. It isn’t a good representation of what we are all about. If fans had the chance to name an album which shouldn’t have the Chimaira mark on it, I’d suggest The Age Of Hell would be the appropriate album.

— Mark Hunter, on The Age of Hell and line-up changes [6]

The Age Of Hell was released in the US on August 16, 2011. Frontman Mark Hunter states, "Words can’t express what it took to create this album. We hope you love it as much as we do. Turn it up loud, this is Chimaira at [its] finest."[16] The album was also released in the UK through Metal Hammer magazine. In November 2011, Mark Hunter released a statement stating that guitarists Matt DeVries and Rob Arnold are leaving Chimaira after Chimaira Christmas '11. He added that they are leaving for 'personal reasons'. This was not well received by the fans, many stated "R.I.P. Chimaira" and "The Death of Chimaira."

It was confirmed that Emil Werstler will be replacing Rob Arnold as the lead guitarist, meanwhile Matt Szlachta from Dirge Within [17] and Jeremy Creamer from Dååth will be handling rhythm guitar and bass duties respectively.

On December 29, 2012, Chimaira Christmas 13 revealed a new song from the upcoming 2013 album, titled "I Despise". The same day an official teaser for the new album was added to YouTube, titled Chimaira 2013.[18] On April 18, 2013, the band released a teaser video on their YouTube channel revealing the album title, Crown of Phantoms, and a release date, July 30, 2013. 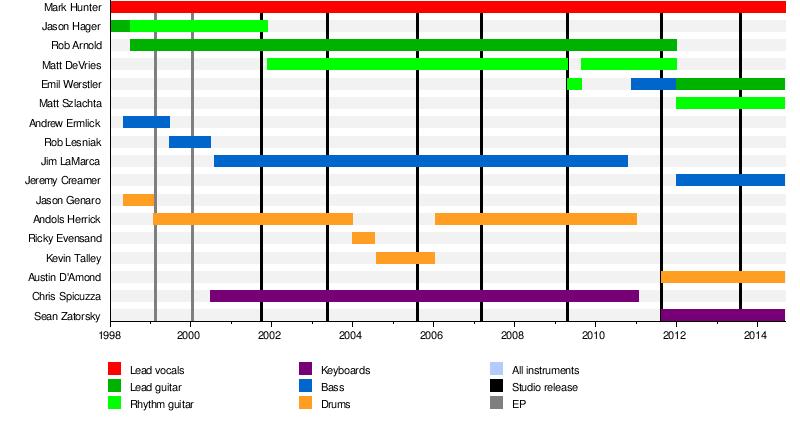