Chuseok (Korean: 추석),[1] originally known as hangawi (한가위 from archaic Korean for "the great middle (of autumn)"(한가위), is a major harvest festival and a three-day holiday in Korea celebrated on the 15th day of the 8th month of the lunar calendar on the full moon.[2] Like many other harvest festivals around the world, it is held around the autumn equinox.

As a celebration of the good harvest, Koreans visit their ancestral hometowns and share a feast of Korean traditional food such as songpyeon (송편) and rice wines such as sindoju and dongdongju.

According to popular belief, Chuseok originates from gabae (hangul:가배 Gabae started during the reign of the third king of the kingdom of Silla (57 BC ??AD 935), when it was a month-long weaving contest between two teams.[3][4] Come the day of Gabae, the team that had woven more cloth had won and was treated to a feast by the losing team. However, it is also said that Chuseok marks the day Silla won a great victory over the rival kingdom of Baekje. It is believed that weaving competitions, archery competitions, and martial arts demonstrations were held as part of the festivities.[5]

Many scholars also believe Chuseok may originate from ancient shamanistic celebrations of the harvest moon.[4] New harvests are offered to local deities and ancestors, which means Chuseok may have originated as a worship ritual.[6] In some areas, if there is no harvest, worship rituals are postponed, or in areas with no annual harvest, Chuseok is not celebrated. 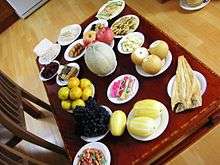 Another table with many traditional food offerings on it

In contemporary South Korea, on Chuseok, masses of people travel from large cities to their hometowns to pay respect to the spirits of their ancestors.[7] People perform ancestral worship rituals early in the morning. Then, they visit the tombs of their immediate ancestors to trim plants and clean the area around the tomb, and offer food, drink, and crops to their ancestors.[7] Harvest crops are attributed to the blessing of ancestors. Chuseok is commonly translated as "Korean Thanksgiving" in English.[8]

It is one of the ancestral memorial rites that have been done for thousands of years in Korea.[9] It is done in the morning of Chuseok, and families hold a memorial service for their ancestors, usually honoring four generations back. The meaning of Charye is to return their favors and honor them. It is due to a belief that Koreans do not believe that a person is really dead when they physically die. They believe their spirits are still alive and protect the descendants, so they honor their ancestors by preparing special foods for them.[10] Also, it is important to know how to arrange the foods of Charye on the table: on the north, rice and soup are placed; and, fruits and vegetables are on the south. On the west and in the middle, meat dishes are served; and, on the east, rice cake and some drinks such as makgeolli or soju are placed. The details may vary from each region.[11]

Seongmyo and Beolcho are also done around Chuseok week. Seongmyo is a visiting to ancestral grave sites and Beolcho is the activity to remove weeds around the grave to clean their ancestor's site.[12]

One of the major foods prepared and eaten during the Chuseok holiday is songpyeon (송편; 松편),a Korean traditional rice cake which contains stuffing made with ingredients such as sesame seeds, black beans, mung beans, cinnamon, pine nut, walnut, chestnut, jujube, and honey. When making songpyeon, steaming them over a layer of pine-needles is critical. The word song in songpyeon means a pine tree in Korean. The pine needles not only contribute to songpyeon's aromatic fragrance, but also its beauty and taste[12][13]

Songpyeon is also significant because of the meaning contained in its shape. Songpyeon's rice skin itself resembles the shape of a full moon, but once it wraps the stuffing, its shape resembles the half-moon. Since the Three Kingdoms era in Korean history, a Korean legend stated that these two shapes ruled the destinies of the two greatest rival kingdoms, Baekje and Silla. During the era of King Uija of Baekje, an encrypted phrase, "Baekje is full-moon and Silla is half moon" was found on a turtle's back and it predicted the fall of the Baekje and the rise of the Silla. The prophecy came true when Silla defeated Baekje in their war. Ever since, Koreans started to refer to a half-moon shape as the indicator of the bright future or victory.[13] Therefore, during Chuseok, families gather together and eat half-moon-shaped Songpyeon under the full moon, wishing themselves a brighter future.[12]

Another popular Korean traditional food that people eat during Chuseok is hangwa. It is an artistic food decorated with natural colors and textured with patterns. Hangwa is made with rice flour, honey, fruit, and roots. People use edible natural ingredients to express various colors, flavors, and tastes. Because of its decoration and nutrition, Koreans eat hangwa not only during Chuseok, but also for special events, for instance, weddings, birthday parties, and marriages.[14]

The most famous types of hangwa are yakgwa, yugwa, and dasik. Yakgwa is a medicinal cookie which is made of fried rice flour dough ball, and yugwa is a fried cookie that also refers to a flower. Dasik is a tea cake that people enjoy with tea.[15]

Other foods commonly prepared are japchae, bulgogi, an assortment of Korean pancakes and fruits.

A variety of folk games are played on Chuseok to celebrate the coming of autumn and rich harvest. Village folk dress themselves to look like a cow or a turtle, and go from house to house along with a Nongak band playing music. Other common folk games played on Chuseok are archery and ssireum (Korean wrestling). Folk games also vary from region to region.

Ssireum is the most popular Korean sport played during Chuseok, and contests are usually held during this holiday. Scholars have found evidence for ssireum's existence back during the Goguryeo dynasty era, Ssireum is assumed to have 5000 years of history. Two men wrestle with each other while holding tight to their opponent's satba, red and blue band. A player loses when his upper body touches the ground. The ultimate winner becomes Cheonha Jangsa, Baekdu Jangsa, or Halla Jangsa; these all mean "the most powerful". The winner gets a bull and 1 kg of rice as the prize.[16] Due to its popularity among both the young and the old, ssireum contests are being held more frequently, not limited on the important holidays.

The Ganggangsullae dance is a traditional folk dance performed under the full moon in the night of Chuseok.[17] Women wear Korean traditional dress, hanbok, make a big circle by holding hands of each other, and sing a song while they are going around a circle. Its name, Ganggangsullae, came from the refrain repeated after each verse, so there is no actual meaning to it.

The dance originated in the southern coastal area during the Joseon dynasty. To watch a video clip of the Ganggangsullae dance, click here.

For other folk games, they also play Neolttwigi (also known as the Korean plank), a traditional game that is played on a wooden board.[18]

Though most North Koreans do not have any family gatherings during Chuseok, some, especially those in working classes, try to visit their ancestors's grave sites during Chuseok. However, social and economic issues in North Korea have been preventing visits.[20] In addition, their extremely poor infrastructure, especially in terms of public transportation, make it almost impossible for people to visit grave sites and their families.[21] In contrast to the poorly situated lower class North Koreans, middle and elite classes enjoy the holiday as they want, easily traveling wherever they want to go.[21]

Dates for Chuseok on the Gregorian calendar

Chuseok is on the following days: