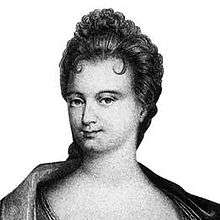 Claudine Alexandrine Guérin de Tencin, Baroness of Saint-Martin-de-Ré (27 April 1682[1] – 4 December 1749) was a French salonist and author. She was the mother of Jean le Rond d'Alembert, philosophe and contributor to the Encyclopédie, though she left him on the steps of the Saint-Jean-le-Rond de Paris church a few days after his birth.

Claudine was born in Grenoble, France where her father, Antoine Guérin, sieur de Tencin, was president of the parliament. Claudine was brought up at a convent near Grenoble and, at the wish of her parents, took the veil but broke her vows and succeeded, in 1712, in gaining formal permission from Pope Clement XI for her secularisation.[2] She is reputed to have had a liaison, while still formally a nun, with the Irish exile soldier Arthur Dillon.

Life as a socialite

She joined her sister Mme. de Ferriol in Paris, where she soon established a salon, frequented by wits and roués.[2] Among her numerous lovers and benefactors was the Chevalier Louis-Camus Destouches, by whom she had an illegitimate son, Jean le Rond d'Alembert. Guillaume Dubois, the future First Minister was reportedly another of her lovers, even after he became Archbishop of Cambrai; but the affair, if it existed, was conducted with discretion.

One of her liaisons did have a tragic ending. Charles-Joseph de la Fresnaye committed suicide in her house, and Mme. de Tencin spent some time in the Châtelet and then in the Bastille in consequence, but was soon liberated as the result of a declaration of her innocence by the Grand Consul.[2]

From this time she devoted herself to political intrigue, especially for the preferment of her brother the abbé Tencin, who became archbishop of Embrun and received a cardinal's hat.[2] The nature of her relationship with her brother was a subject of much speculation, but although she never troubled to deny the rumours, there seems to be no evidence that their affection was more than fraternal.

She also was involved with King Louis XV's best friend, the Maréchal de Richelieu, over whom she allegedly exercised considerable control. She, however, was believed to have had little involvement in Richelieu's behind-the-scenes intrigues at Louis XV's court at Versailles.

Hers was the first of the Parisian literary salons which admitted distinguished foreigners. Among her English guests were Henry St John, 1st Viscount Bolingbroke and Philip Stanhope, 4th Earl of Chesterfield. By the good sense with which she conducted what she called her menagerie, she almost succeeded in effacing the record of her early disgrace.[2]

She was a novelist of considerable merit. Her novels have been highly praised for their simplicity and charm, the last qualities the circumstances of the writer's life would lead one to expect in her work. The best of them is Mémoires du comte de Comminge (1735), which was believed to have been written, as did the other two, by her nephews, MM. d'Argental and Pont de Veyle, the real authorship being carefully concealed.[2]

Her works, with those of Marie-Madeleine de La Fayette, were edited by Etienne and Jay (Paris, 1825); her novels were reprinted, with introductory matter by Lescure, in 1885; and her correspondence in the Lettres de Mmes. de Villars, de La Fayette et de Tencin (Paris, 1805–1832).[2]