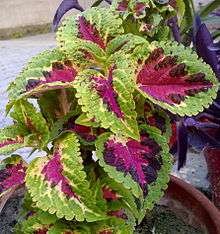 Coleus was a genus of flowering plants in the family Lamiaceae. In recent classifications, the genus is no longer recognized, and the formerly included species are instead placed in the genera Plectranthus and Solenostemon.[1][2] Because the type species, Coleus amboinicus (Plectranthus amboinicus) is now placed in Plectranthus, Coleus is regarded as a synonym of Plectranthus. The term "coleus" is often used as a common name for species formerly placed in the genus Coleus that are cultivated as ornamental plants, particularly Coleus blumei (Plectranthus scutellarioides), which is popular as a garden plant for its brightly colored foliage.