In zoological nomenclature, a type species (species typica) is the species name with which the name of a genus or subgenus is considered to be permanently taxonomically associated, i.e., the species that contains the biological type specimen(s).[1] A similar concept is used for suprageneric groups called a type genus.

In botanical nomenclature, these terms have no formal standing under the code of nomenclature, but are sometimes borrowed from zoological nomenclature. In botany, the type of a genus is a specimen (or, rarely, an illustration) which is also the type of a species. The species that has that type can also be referred to as the type of the genus. Genus and family ranks, the various subdivisions of those ranks, and some higher-rank names based on genus names, have such types.[2]

In bacteriology, a type species is assigned for each genus.[3]

Every named genus or subgenus in zoology, whether or not currently recognized as valid, is theoretically associated with a type species. In practice, however, there is a backlog of untypified names defined in older publications when it was not required to specify a type. 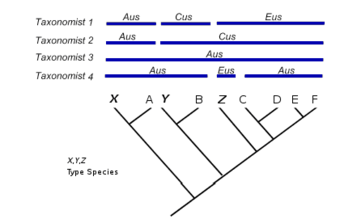 Diagrammatic representation of different nomenclatural interpretations for species. Each taxonomist has a different view for genus attribution, but the reference on type species is preserved, and ensures precise communication.
See also: Types in zoology

A type species is both a concept and a practical system that is used in the classification and nomenclature (naming) of animals. The value of a "type species" lies in the fact that it "anchors" a particular genus name. Whenever a taxon containing multiple species must be divided into more than one genus; the type species automatically assigns the name of the original taxon to one of the resulting new taxa, the one that includes the type species.

The term "type species" is regulated in zoological nomenclature by article 42.3 of the International Code of Zoological Nomenclature, which defines a type species as the name-bearing type of the name of a genus or subgenus (a "genus-group name") is the "type species". In the Glossary, type species is defined as

"The nominal species that is the name-bearing type of a nominal genus or subgenus".[4]

The type species permanently attaches a genus to its formal name (its generic name) by providing just one species within that genus to which the genus is permanently linked (i.e. the genus must include that species if it is to bear the name). The species name in turn is fixed, in theory, to a type specimen.

For example, the type species for the land snail genus Monacha is Monacha cartusiana. That genus is currently placed within the family Hygromiidae. The type genus for that family is the genus Hygromia.

The concept of the type species in zoology was introduced by Pierre André Latreille.[5]