Collapse: How Societies Choose to Fail or Succeed

Collapse: How Societies Choose to Fail or Succeed (titled Collapse: How Societies Choose to Fail or Survive for the British edition) is a 2005 book by academic and popular science author Jared Diamond, which reviews the causes of historical and pre-historical instances of societal collapse — particularly those involving significant influences from environmental changes, the effects of climate change, hostile neighbors, and trade partners — and considers the responses different societies have had to such threats.

While the bulk of the book is concerned with the demise of these historical civilizations, Diamond also argues that humanity collectively faces, on a much larger scale, many of the same issues, with possibly catastrophic near-future consequences to many of the world's populations.

In the prologue, Jared Diamond summarizes his methodology in one paragraph:

This book employs the comparative method to understand societal collapses to which environmental problems contribute. My previous book (Guns, Germs, and Steel: The Fates of Human Societies), had applied the comparative method to the opposite problem: the differing rates of buildup of human societies on different continents over the last 13,000 years. In the present book focusing on collapses rather than buildups, I compare many past and present societies that differed with respect to environmental fragility, relations with neighbors, political institutions, and other "input" variables postulated to influence a society's stability. The "output" variables that I examine are collapse or survival, and form of the collapse if collapse does occur. By relating output variables to input variables, I aim to tease out the influence of possible input variables on collapses.[2]

Collapses of past societies

The root problem in all but one of Diamond's factors leading to collapse is overpopulation relative to the practicable (as opposed to the ideal theoretical) carrying capacity of the environment. The one factor not related to overpopulation is the harmful effect of accidentally or intentionally introducing nonnative species to a region.

Diamond also writes about cultural factors (values), such as the apparent reluctance of the Greenland Norse to eat fish. Diamond also states that "it would be absurd to claim that environmental damage must be a major factor in all collapses: the collapse of the Soviet Union is a modern counter-example, and the destruction of Carthage by Rome in 146 BC is an ancient one. It's obviously true that military or economic factors alone may suffice".[3]

He also lists twelve environmental problems facing humankind today. The first eight have historically contributed to the collapse of past societies:

Further, he says four new factors may contribute to the weakening and collapse of present and future societies:

In the last chapter, he discuss environmental problems facing modern societies and addresses objections that are often given to dismiss the importance of environmental problems (section "One-liner objections"[4]). In the "Further readings" section, he gives suggestions to people who asks "What can I do as an individual?".[5] He also draws conclusions, such as:

In fact, one of the main lesson to be learned from the collapses of the Maya, Anasazi, Easter Islanders, and those other past societies [...] is that a society's steep decline may begin only a decade or two after the society reaches its peak numbers, wealth, and power. [...] The reason is simple: maximum population, wealth, resource consumption, and waste production mean maximum environmental impact, approaching the limit where impact outstrips resources.[6]

Finally, he answers the question "What are the choices that we must make if we are to succeed, and not to fail?" by identifying two crucial choices distinguishing the past societies which failed from those which survived:[7] 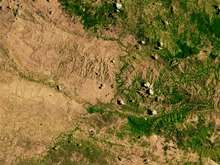 The limit of deforestation between Haiti (on the left) and the Dominican Republic (on the right). Collapse is divided into four parts.

While he planned the book, Diamond at first thought that it would deal only with human impacts on the environment. Instead, what has emerged is arguably the most incisive study of senescing human civilizations ever written. [...] the fact that one of the world's most original thinkers has chosen to pen this mammoth work when his career is at his apogee is itself a persuasive argument that Collapse must be taken seriously. It is probably the most important book you will ever read.

The Economist's review was generally favorable, although the reviewer had two disagreements. First, the reviewer felt Diamond was not optimistic enough about the future. Secondly, the reviewer claimed Collapse contains some erroneous statistics: for instance, Diamond supposedly overstated the number of starving people in the world.[9] University of British Columbia professor of ecological planning William Rees wrote that Collapse's most important lesson is that societies most able to avoid collapse are the ones that are most agile; they are able to adopt practices favorable to their own survival and avoid unfavorable ones. Moreoever, Rees wrote that Collapse is "a necessary antidote" to followers of Julian Simon, such as Bjørn Lomborg who authored The Skeptical Environmentalist. Rees explained this assertion as follows:[10]

Human behaviour towards the ecosphere has become dysfunctional and now arguably threatens our own long-term security. The real problem is that the modern world remains in the sway of a dangerously illusory cultural myth. Like Lomborg, most governments and international agencies seem to believe that the human enterprise is somehow 'decoupling' from the environment, and so is poised for unlimited expansion. Jared Diamond's new book, Collapse, confronts this contradiction head-on.

Jennifer Marohasy of the think-tank, Institute of Public Affairs wrote a critical review in Energy & Environment, in particular its chapter on Australia's environmental degradation. Marohasy claims that Diamond reflects a popular view that is reinforced by environmental campaigning in Australia, but which is not supported by evidence, and argues that many of his claims are easily disproved.[11]

In his review in The New Yorker, Malcolm Gladwell highlights the way in which Diamond's approach differs from traditional historians by focusing on environmental issues rather than cultural questions.[12]

Diamond's distinction between social and biological survival is a critical one, because too often we blur the two, or assume that biological survival is contingent on the strength of our civilizational values... The fact is, though, that we can be law-abiding and peace-loving and tolerant and inventive and committed to freedom and true to our own values and still behave in ways that are biologically suicidal.

While Diamond does not reject the approach of traditional historians, his book, according to Gladwell, vividly illustrates the limitations of that approach. Gladwell demonstrates this with his own example of a recent ballot initiative in Oregon, where questions of property rights and other freedoms were subject to a free and healthy debate, but serious ecological questions were given scant attention.

In 2006 the book was shortlisted for The Aventis Prizes for Science Books award, eventually losing out to David Bodanis' Electric Universe.[13]

Jared Diamond's thesis that Easter Island society collapsed in isolation entirely due to environmental damage is contested by some ethnographers and archaeologists who argue that the introduction of diseases carried by European colonizers and slave raiding,[14] which devastated the population in the 19th century, had a much greater social impact than environmental decline and that introduced animals, first rats and then sheep, were greatly responsible for the island's loss of native flora which came closest to deforestation as late as 1930–1960.[15]

The book Questioning Collapse (Cambridge University Press, 2010) is a collection of essays by anthropologists criticizing various aspects of Diamond's books Collapse and Guns, Germs and Steel: A short history of everybody for the last 13,000 years.[16]

In 2010, National Geographic released the documentary film Collapse based on Diamond's book.[17][18]