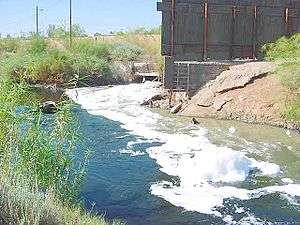 Water pollution is an environmental issue that affects many water bodies. This photograph shows foam on the New River as it enters the United States from Mexico.

The carbon dioxide equivalent of greenhouse gases (GHG) in the atmosphere has already exceeded 400 parts per million (NOAA) (with total "long-term" GHG exceeding 455 parts per million). (Intergovernmental Panel on Climate Change Report) This level is considered a tipping point. "The amount of greenhouse gas in the atmosphere is already above the threshold that can potentially cause dangerous climate change. We are already at risk of many areas of pollution...It's not next year or next decade, it's now." Report from the UN Office for the Coordination of Humanitarian Affairs (OCHA):[1]

These disasters take a heavier human toll and come with a higher price tag. In the last decade, 2.4 billion people were affected by climate related disasters, compared to 1.7 billion in the previous decade. The cost of responding to disasters has risen tenfold between 1992 and 2008. Destructive sudden heavy rains, intense tropical storms, repeated flooding and droughts are likely to increase, as will the vulnerability of local communities in the absence of strong concerted action." (OCHA) "Climate change is not just a distant future threat. It is the main driver behind rising humanitarian needs and we are seeing its impact. The number of people affected and the damages inflicted by extreme weather has been unprecedented."

Environment destruction caused by humans is a global problem, and this is a problem that is on going every day. By year 2050, the global human population is expected to grow by 2 billion people, thereby reaching a level of 9.6 billion people (Living Blue Planet 24).[2] The human effects on Earth can be seen in many different ways. A main one is the temperature rise, and according to the report ”Our Changing Climate”, the global warming that has been going on for the past 50 years is primarily due to human activities (Walsh, et al. 20). Since 1895, the U.S. average temperature has increased from 1.3 °F to 1.9 °F, with most of the increase taken place since around year 1970 (Walsh, et al. 20).[3]

The level of understanding of Earth has increased markedly in recent times through science especially with the application of the scientific method. Environmental science is now a multi-disciplinary academic study taught and researched at many universities. This is used as a basis for addressing environmental issues.

Large amounts of data have been gathered and these are collated into reports, of which a common type is the State of the Environment publications. A recent major report was the Millennium Ecosystem Assessment, with input from 1200 scientists and released in 2005, which showed the high level of impact that humans are having on ecosystem services.

Environmental issues are addressed at a regional, national or international level by government organizations.

See also: Cost of pollution and Cost of global warming

Sustainability is the key to prevent or reduce the effect of environmental issues. There is now clear scientific evidence that humanity is living unsustainably, and that an unprecedented collective effort is needed to return human use of natural resources to within sustainable limits.[6][7] For humans to live sustainably, the Earth's natural resources must be used at a rate at which they can be replenished (and by limiting global warming).

Concerns for the environment have prompted the formation of green parties, political parties that seek to address environmental issues. Initially these were formed in Australia, New Zealand and Germany but are now present in many other countries.

There are an increasing number of films being produced on environmental issues, especially on climate change and global warming. Al Gore's 2006 film An Inconvenient Truth gained commercial success and a high media profile.