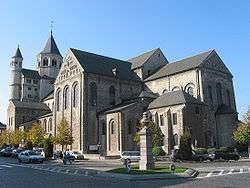 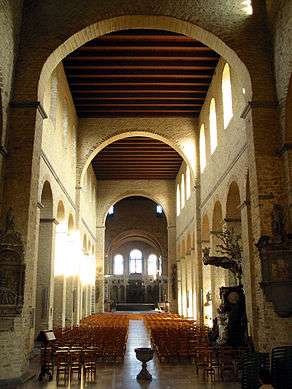 Nave of the church. 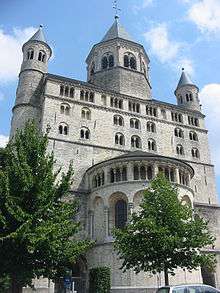 The Collegiate Church of St. Gertrude is a historical building in Nivelles, Walloon Brabant, Belgium, which was built in the 11th century.

The church was built to serve the Abbey of Nivelles, originally a monastery of Benedictine nuns founded by Itta of Metz, the widow of Pepin of Landen, and mother of Gertrude of Nivelles, the first abbess, in the 7th century. Her remains are buried in a chapel of the church. This structure was built in the early 11th century and consecrated in 1046 by Wazo, Bishop of Liège, in the presence of the Emperor Henry III. It is an example both of Mosan art and of Ottonian architecture.

With the growing membership of members of the nobility among the nuns starting in the 12th century, the community gradually changed its character from its monastic one until it had become a community of canonesses regular by the 15th century, at the latest. At that point, the church acquired its status of collegiate church.

Claudine Donnay-Rocmans writes in the Patrimoine majeur de Wallonie that the interior dimensions recall: "the splendour of the Ottonian liturgy, as people are able to know it from the Abbey of Essen (Germany)". [1]

The westwork has been reconstructed. Its current appearance is the result of a long reconstruction finished in 1984, following severe damage from bombing by the German Luftwaffe in May 1940, in the course of the Battle of Belgium.

This article is issued from Wikipedia - version of the 3/19/2016. The text is available under the Creative Commons Attribution/Share Alike but additional terms may apply for the media files.