For other uses, see Liturgy (disambiguation).

Liturgy (Greek: λειτουργία), literally "the work of the people", and translated idiomatically as "public service" in secular terms is the customary public worship performed by a religious group, according to its particular beliefs, customs and traditions. Technically speaking, liturgy is a subset of ritual. When ritual is undertaken in order to participate in a divine act or assist a divine action, it is liturgy. If the ritual does not have this purpose it is not liturgy, but only ritual. Thus, the word, sometimes rendered by its English translation "Service or Divine Service", refers to a formal ritual, which may or may not be elaborate, and enacted by those who understand themselves to be participating in a divine action, such as the Eastern Orthodox Divine Liturgy (Greek: Θεία Λειτουργία), Catholic Mass, the Eucharist or Mass (Anglican Communion). However, a daily activity such as the Muslim salah[1] and Jewish synagogue services would be ritual, but not liturgy. If the Temple were re-established, the ritual undertaken by the Judaic priesthood within the Temple would be liturgy.

As a religious phenomenon, liturgy is a communal response to, and participation in, the sacred through activity reflecting praise, thanksgiving, supplication, or repentance. Ritualization may be associated with life events such as birth, coming of age, marriage and death. It thus forms the basis for establishing a relationship with a divine agency, as well as with other participants in the liturgy. Methods of dress, preparation of food, application of cosmetics or other hygienic practices are all considered liturgical activities.

The word liturgy, derived from the technical term in ancient Greek, leitourgia, which literally means "work of the people" is a literal translation of the two words "litos ergos" or "public service". In origin it signified the often expensive offerings wealthy Greeks made in service to the people, and thus to the polis and the state.[2] Through the leitourgia, the rich carried a financial burden and were correspondingly rewarded with honours and prestige. The leitourgia were assigned by the polis, the State and Roman Empire and became obligatory in the course of the 3rd century A.D. The performance of such supported the patron's standing among the elite and the popular at large. The holder of a Hellenic leitourgia was not taxed a specific sum, but was entrusted with a particular ritual, which could be performed with greater or lesser magnificence. The chief sphere remained that of civic religion, embodied in the festivals: M.I. Finley notes "in Demosthenes' day there were at least 97 liturgical appointments in Athens for the festivals, rising to 118 in a (quadrennial) Panathenaic year."[3] However groups of rich citizens were assigned to pay for expenses such as civic amenities and even payment of warships. Eventually, under the Roman Empire, such obligations, known as munera, devolved into a competitive and ruinously expensive burden that was avoided when possible. These included a wide range of expenses having to do with civic infrastructure and amenities; and imperial obligations such highway, bridge and aqueduct repair, supply of various raw materials, bread-baking for troops in transit, just to name a few.

Jewish liturgy are the prayer recitations that form part of the observance of Rabbinic Judaism. These prayers, often with instructions and commentary, are found in the siddur, the traditional Jewish prayer book. In general, Jewish men are obligated to pray three times a day within specific time ranges (zmanim). while, according to the Talmud, women are only required to pray once daily, as they are generally exempted from obligations that are time dependent. 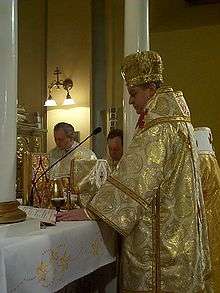 A bishop celebrating the Divine Liturgy in an Eastern Catholic Church in Prešov, Slovakia. 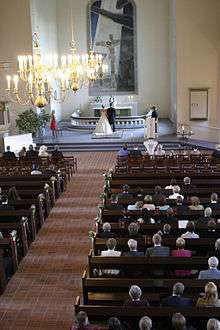 Frequently in Christianity, a distinction is made between "liturgical" and "non-liturgical" churches based on how elaborate or antiquated the worship; in this usage, churches whose services are unscripted or improvised are called "non-liturgical". Others object to this usage, arguing that this terminology obscures the universality of public worship as a religious phenomenon.[4] Thus, even the open or waiting worship of Quakers is liturgical, since the waiting itself until the Holy Spirit moves individuals to speak is a prescribed form of Quaker worship, sometimes referred to as "the liturgy of silence".[5] Typically in Christianity, however, the term "the liturgy" normally refers to a standardised order of events observed during a religious service, be it a sacramental service or a service of public prayer. In the Catholic tradition, liturgy is the participation of the people in the work of God, which is primarily the saving work of Jesus Christ. In the liturgy, Christ continues the work of redemption.[6]

The term "liturgy" literally in Greek means "work for the people", but a better translation is "public service" or "public work", as made clear from the origin of the term as described above. The early Christians adopted the word to describe their principal act of worship, the Sunday service (Holy Eucharist, Holy Communion, Mass or Divine Liturgy). This service, liturgy, or ministry (from the Latin "ministerium") is a duty for Christians as a priestly people by their baptism into Christ and participation in his high priestly ministry. It is also God's ministry or service to the worshippers. It is a reciprocal service. As such, many Christian churches designate one person who participates in the worship service as the liturgist. The liturgist may read announcements, scriptures, and calls to worship, while the minister preaches the sermon, offers prayers, and blesses sacraments. The liturgist may be either an ordained minister or a layman. The entire congregation participates in and offers the liturgy to God.

Salāt ("prayer", Arabic: صلاة‎‎ ṣalāh or gen: ṣalāt; pl. صلوات ṣalawāt) is the practice of physical and compulsory prayer in Islam as opposed to dua, which is the Arabic word for supplication. Its importance for Muslims is indicated by its status as one of the Five Pillars of Islam.

Salat is preceded by ritual ablution and usually performed five times a day. It consists of the repetition of a unit called a rakʿah (pl. rakaʿāt) consisting of prescribed actions and words. The number of obligatory (fard) rakaʿāt varies from two to four according to the time of day or other circumstances (such as Friday congregational worship, which has two rakats). Prayer is obligatory for all Muslims except those who are prepubescent, menstruating, or in puerperium stage after childbirth.[7]