Colombo International Financial City (CIFC) is a special financial zone that is expected to become an offshore financial centre. It is situated in Colombo, Sri Lanka where the former Port City was planned and is to be built on reclaimed land adjacent to the Galle Face Green. The city will use construction resources from the Colombo Harbour Expansion Project, currently under construction near the site of this proposed city.[1]

In 2016 the Port City project was again added in the Megapolis plan[2] and the government which planned an International Finance center in Colombo with its own laws decided to sign a new tripartite agreement which resulted in the project becoming the Colombo International Finance City. Megapolis and Western Development Minister Champika Ranawaka, together with the Urban Development Authority (UDA) and the CHEC Port City Colombo signed the new agreement in August 12, 2016 and the city is expected to be governed under a new act named Colombo International Financial Centre Law.[1][3][4]

The Finance city is to be constructed between the southern edge of the new Colombo South Port and the Fort Lighthouse. The total area of sea to be reclaimed is 450 acres.[5] 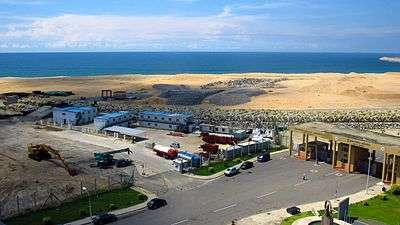 The Port City was claimed to be a concept of former President Mahinda Rajapaksa, who was apparently inspired while inspecting the landfill being constructed for the Colombo South port.[5] Although Singaporean CESMA proposed a similar thing in 1998 and Ranil Wickremesinghe has been credited for bringing the concept in the 2004 for a smaller and safer land reclamation project in the same place under the Western Region Megapolis .[6][7][8]

The construction was set to begin in March 2011 but due to several circumstances the project was stopped. In mid 2012, the Sri Lankan Port Authority, better known as SLPA, announced that the construction of the then Colombo Port City project would commence on 17 September 2014. The budget is estimated to be US$1.5 billion.[9]

Construction of the Colombo Port City project was launched on 17 September 2014 by Sri-Lankan President Mahinda Rajapaksa and the Chinese President Xi Jinping.[11]

The port city has been criticized for several reasons. Many environmentalists claim that the port city contain many environmental hazards and the adverse environmental impacts the project will cause would be far more than the economic benefits it may have to offer.[12] Maritime sector veterans also pointed out the dangers Sri Lanka may face due to giving outright ownership of land to China specially in a high-security zone and concerns about its effects on Sri Lanka's sovereignty has also been expressed. The project was also criticized for its lack of transparency and irregularities such as the involvement of SLPA which is implementing the reclamation project, had no mandate to do so as its mandate is to deal with ports and shipping.[13][14]

The port city was suspended after the fall of the Rajapaksa government due to issues related to sovereignty of Sri Lanka and adverse environmental impacts.[13][15][16] The project was replaced with the siginging of a new agreement for the Colombo international Financial Centre several other major changes inlcuding stricter environmental restrictions were agreed on. The changes include,[17]

According to the agreement signed in September 2014 signed by the Rajapaksa government, a land of 20 hectares will be granted to the C.H.E.C. Port City (Pvt) Ltd on free hold base and the rest land is granted on 99-year lease basis. According to the consultations of the new government, no land will be granted on free hold basis, and all the lands will be on 99-year lease basis. If the government does not require these 20 hectares, the company may obtain the land for another 99 years.

Role of the Ministry of Megapolis and Western Development

• Under the new agreement, responsibility of performing government responsibilities including amendment of the Sri Lanka Ports Authority Act is vested with the Ministry of Ports and Shipping. Instead of the agreement signed by the previous government on 16 September 2014, a new trilateral agreement will be signed among the Ministry of Megapolis and Western Development (on behalf of the government), UDA and the project company.

Legal situation of the lands proposed to be filled

The status of lands to be filled is unclear under the original concessionary agreement signed by the previous government. Those lands are not a part of the Colombo District. Hence, it is not considered as a land belonging to the Sri Lankan territory according to the article 5 of the Constitution. Under the new law, the land will be brought into the Administrative District of Colombo, and it will be assigned to the proposed Financial City Corporation out of the Colombo Municipal Council.

• According to the original agreement a key tax plan will be implemented by the Sri Lanka Ports Authority related to leasing of lands to the project company. Under the new agreement, filled lands will be gazetted by the President under the Lands Ordinance and thereafter will be allocated to the UDA. The UDA will declare them as a development area under the Urban Development Authority Act. This will happen before land is leased on 99 year basis to the Project Company.

• Under the new agreement, the project company will allocate Rs. 500 million towards the fishermen’s income support programme to the Ministry of Megapolis and Western Development to implement the programme in consultation with the Ministry of Fisheries and Aquatic Resources Development.

Management and maintenance of the reclaimed area

• Under the original agreement, an Estate Management Company (EMC) 100% owned by the GOSL would manage, maintain, and repair the common areas of the Port City by collecting management charges from investors. However, until such time EMC is self-sustainable, GOSL or SLPA would have had to inject funds for the operation of the EMC. In order to ease the GOSL’s obligation to fund such a venture, under the new agreement, the project company has agreed to consider establishing and operating the EMC in partnership with GOSL.

• The original agreement limits developments GOSL could undertake on its land during three years from the completion of reclamation to educational and cultural activities only. Under the new agreement the above has expanded in favour of the GOSL to include healthcare and hospitals and exhibition and convention centres and the new Colombo International Financial Centre. Also no restrictions will be placed on developing the North and West ports of the Colombo Harbour. In addition, the project company has agreed to setting up the CIFC building in the land area reclaimed first including making a new investment in the CIFC building no sooner it is technically feasible to build on reclaimed land and upon mutually acceptable terms being agreed with the GOSL after a feasibility study.

• In view of the goodwill created by the visits of the Sri Lankan President and the Hon. Prime Minister to China, the project company has agreed to withdraw all compensation claims for losses incurred due to the suspension of the project caused by the failure of the previous administration of the SLPA to obtain the required environmental permits.

• In their original Master Plan there was provision for night racing. They had fully abandoned that plan at present. In view of this, a large extent of marketable land becomes available. Out of this, 2 hectares may be allocated to them, without reducing the land extent of 62 hectares owned by the GOSL. This will be a gesture to reciprocate their goodwill in completely waiving off all compensation claims.This proposal was acceptable to the GOSL since the project company has agreed in the new master plan approved by the UDA this year to increase public lands (parks, roads, walkways, etc. to be used by the general public) by 28 hectares more than originally planned to make Port City more attractive to the public. For example, when completed port city will have 45 hectares of parks and 13 hectares of artificial beaches (compared to 5.7 hectares available to the public at Galle Face Green).

• Under the original agreement, the responsibility for undertaking and financing all environmental approvals for the project was a responsibility of the SLPA. There were shortcomings in the environmental approvals obtained by the former administration of the SLPA, A comprehensive new supplementary environmental impact assessment was carried out by the Ministry of Megapolis in 2015 to address such shortcomings with the cooperation and funding extended by the project company.

• Under the original environmental impact assessment(EIA) study carried out in 2011, only 42 conditions were imposed by the Department of Coast Conservation in its development permit. However under the new supplementary EIA carried out by the Ministry of Megapolis for 269 hectares of reclaimed land and made available for public comments in December 2015, the new development permit issued by the Department of Coast Conservation includes 70 conditions to mitigate the impact on the environment.

• The Rajapaksa administration had this as a Land Reclamation Project to utilize this initially for real estate, sports, education and cultural development including night racing tracks etc. Therefore, the bulk of the land was not available for real estate development by the government. Now it has been agreed with the Chinese Government that this land is being used to build a Financial City to fill the vacuum between Singapore and Dubai. This will enable offshore operations. For this purpose, the government will propose new laws for governing offshore activities like in Dubai. The Financial City will make a major income earner and an employment provider for Sri Lanka.