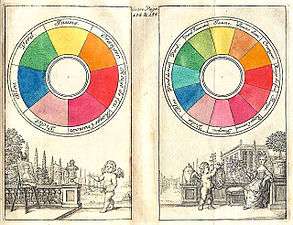 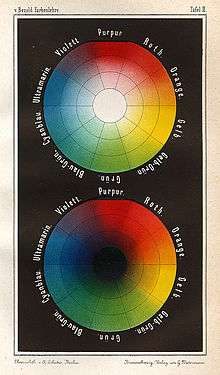 A color wheel or colour circle[1] is an abstract illustrative organization of color hues around a circle, which shows the relationships between primary colors, secondary colors, tertiary colors etc.

Some sources use the terms color wheel and color circle interchangeably;[2][3] however, one term or the other may be more prevalent in certain fields or certain versions as mentioned above. For instance, some reserve the term color wheel for mechanical rotating devices, such as color tops or filter wheels. Others classify various color wheels as color disc, color chart, and color scale varieties.[4]

As an illustrative model, artists typically use red, yellow, and blue primaries (RYB color model) arranged at three equally spaced points around their color wheel.[5] Printers and others who use modern subtractive color methods and terminology use magenta, yellow, and cyan as subtractive primaries. Intermediate and interior points of color wheels and circles represent color mixtures. In a paint or subtractive color wheel, the "center of gravity" is usually (but not always[6]) black, representing all colors of light being absorbed; in a color circle, on the other hand, the center is white or gray, indicating a mixture of different wavelengths of light (all wavelengths, or two complementary colors, for example).

The arrangement of colors around the color circle is often considered to be in correspondence with the wavelengths of light, as opposed to hues, in accord with the original color circle of Isaac Newton. Modern color circles include the purples, however, between red and violet.[7] Color scientists and psychologists often use the additive primaries, red, green and blue; and often refer to their arrangement around a circle as a color circle as opposed to a color wheel.[8]

Colors of the color wheel 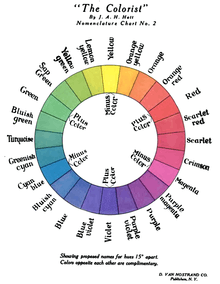 A 1908 color wheel with red, green, and violet "plus colors" and magenta, yellow, and cyan blue "minus colors"

Goethe's Theory of Colours provided the first systematic study of the physiological effects of color (1810). His observations on the effect of opposed colors led him to a symmetric arrangement of his color wheel anticipating Ewald Hering's opponent color theory (1872).

...for the colours diametrically opposed to each other... are those that reciprocally evoke each other in the eye.
— Goethe, Theory of Colours

The color circle and color vision 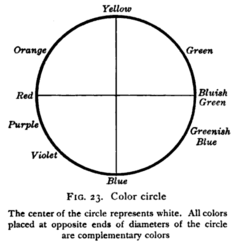 A color circle based on spectral wavelengths appears with red at one end of the spectrum and violet at the other. A wedge-shaped gap represents colors that have no unique spectral frequency. These extra-spectral colors, the purples, form from additive mixture of colors from the ends of the spectrum.

In normal human vision, wavelengths of between about 400 nm and 700 nm are represented by this incomplete circle, with the longer wavelengths equating to the red end of the spectrum. Complement colors are located directly opposite each other on this wheel. These complement colors are not identical to colors in pigment mixing (such as are used in paint), but when lights are additively mixed in the correct proportions appear as a neutral grey or white.[9]

For example: the reason that the Wimbledon tennis tournament uses purple on the Wimbledon official logo is that purple is located almost opposite of green on the color wheel. Purple against green provides good contrast.[10]

The color circle is used for, among other purposes, illustrating additive color mixture. Combining two colored lights from different parts of the spectrum may produce a third color that appears like a light from another part of the spectrum, even though dissimilar wavelengths are involved. This type of color matching is known as metameric matching.[11] Thus a combination of green and red light might produce a color close to yellow in apparent hue. The newly formed color lies between the two original colors on the color circle, but they are usually represented as being joined by a straight line on the circle, the location of the new color closer to the (white) centre of the circle indicating that the resulting hue is less saturated (i.e., paler) than either of the two source colors. The combination of any two colors in this way are always less saturated than the two pure spectral colors individually.

Objects may be viewed under a variety of different lighting conditions. The human visual system is able to adapt to these differences by chromatic adaptation. This aspect of the visual system is relatively easy to mislead, and optical illusions relating to color are therefore a common phenomenon. The color circle is a useful tool for examining these illusions.

Arranging spectral colors in a circle to predict admixture of light stems from work by Sir Isaac Newton. Newton's calculation of the resulting color involves three steps: First, mark on the color circle the constituent colors according to their relative weight. Second, find the barycenter of these differently weighted colors. Third, interpret the radial distance (from the center of the circle to the barycenter) as the saturation of the color, and the azimuthal position on the circle as the hue of the color. Thus, Newton's color circle is a predecessor of the modern, horseshoe-shaped CIE color diagram.

The psychophysical theory behind the color circle dates to the early color triangle of Thomas Young, whose work was later extended by James Clerk Maxwell and Hermann von Helmholtz. Young postulated that the eye contains receptors that respond to three different primary sensations, or spectra of light. As Maxwell showed, all hues, but not all colors, can be created from three primary colors such as red, green, and blue, if they are mixed in the right proportions.

There is no straight-line relationship between colors mixed in pigment, which vary from medium to medium. With a psychophysical color circle, however, the resulting hue of any mixture of two colored light sources can be determined simply by the relative brightness and wavelength of the two lights.[11] A similar calculation cannot be performed with two paints. As such, a painter's color wheel is indicative rather than predictive, being used to compare existing colors rather than calculate exact colors of mixtures. Because of differences relating to the medium, different color wheels can be created according to the type of paint or other medium used, and many artists make their own individual color wheels. These often contain only blocks of color rather than the gradation between tones that is characteristic of the color circle.[12]

A number of interactive color wheel applications are available both on the Internet and as desktop applications. These programs are used by artists and designers for picking colors for a design. 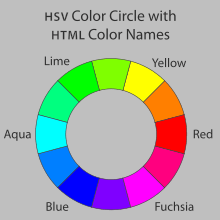 A color wheel based on HSV, labeled with HTML color keywords

The HSL and HSV color spaces are simple geometric transformations of the RGB cube into cylindrical form. The outer top circle of the HSV cylinder – or the outer middle circle of the HSL cylinder – can be thought of as a color wheel. There is no authoritative way of labeling the colors in such a color wheel, but the six colors which fall at corners of the RGB cube are given names in the X11 color list, and are named keywords in HTML.[13]

Color schemes are logical combinations of colors on the color wheel.

In color theory, a color scheme is the choice of colors used in design for a range of media. For example, the use of a white background with black text is an example of a common default color scheme in web design.

Color schemes are used to create style and appeal. Colors that create an aesthetic feeling together commonly appear together in color schemes. A basic color scheme uses two colors that look appealing together. More advanced color schemes involve several colors in combination, usually based around a single color—for example, text with such colors as red, yellow, orange and light blue arranged together on a black background in a magazine article.

For a list of ways to construct color schemes, regarding properties such as warmness/achromiticness/complementariness, see color theory.