Not to be confused with the short period comet 75D/Kohoutek.

Comet Kohoutek is a long-period comet; its previous apparition was about 150,000 years ago, and its next apparition will be in about 75,000 years.[1] At its apparition in 1973 it had a hyperbolic trajectory (e > 1) due to gravitational perturbations from giant planets. Due to its path, scientists theorized that Kohoutek was an Oort-cloud object. As such, it was believed that this was the comet's first visit to the inner Solar System, which would result in a spectacular display of outgassing. Infrared and visual telescopic study have led many scientists to conclude, in retrospect, that Kohoutek is actually an Edgeworth/Kuiper-belt object, which would account for its apparent rocky makeup and lack of outgassing.[2]

Before its close approach, Kohoutek was hyped by the media as the "comet of the century". However, Kohoutek's display was considered a let-down,[3] possibly due to partial disintegration when the comet closely approached the Sun prior to its Earth flyby. Since this was probably the comet's first visit to the inner Solar System, it would have still contained large amounts of frozen volatiles since its creation. Although it failed to brighten to levels expected, it was still a naked-eye object. Its greatest visual magnitude was −3, when it was at perihelion, 0.14 AU (21,000,000 km; 13,000,000 mi) from the Sun. Its orbital inclination is 14.3°. Its best viewing was in the night sky after perihelion, when it had dimmed to fourth magnitude. The comet also sported a tail up to 25° long, along with an anti-tail.

This comet was observed by the crews of Skylab 4 and Soyuz 13, thus becoming the first comet to be observed by a manned spacecraft, since Apollo 13's planned observations of the prominent naked-eye Comet Bennett were aborted by the moon-bound craft's oxygen-tank explosion. 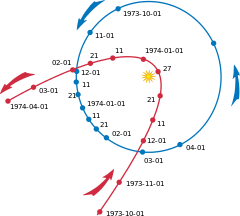 Orbits of Comet Kohoutek and Earth 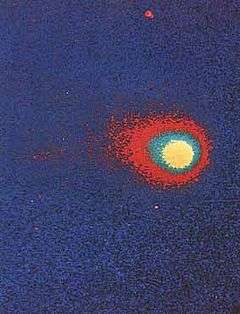 False color image of Comet Kohoutek as photographed with the far-ultraviolet electrographic camera during a Skylab spacewalk on December 25, 1973.

Because Comet Kohoutek fell far short of expectations, its name became synonymous with spectacular duds. However, it was fairly bright as comets go and put on a respectable show in the evenings shortly after perihelion.

In 1973, David Berg, founder of the Children of God, predicted that Comet Kohoutek foretold a colossal doomsday event in the United States in January 1974.[4][5] Children of God members distributed Berg's message of doom across the country. The majority of U.S.-based members then fled in anticipation to existing communes, or formed new ones, around the world.