"Apogee" redirects here. For the literary journal, see Perigee: Publication for the Arts. For other uses, see Apogee (disambiguation). For the architectural term, see Apse.
Not to be confused with the ancient shield Aspis.

The apsides indicate the nearest and furthest points of an orbiting body around its host. 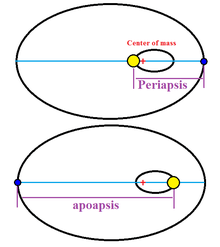 An apsis (Greek: ἁψίς; plural apsides /ˈæpsᵻdiːz/, Greek: ἁψίδες) is an extreme point in an object's orbit. The word comes via Latin from Greek and is cognate with apse.[1] For elliptic orbits about a larger body, there are two apsides, named with the prefixes peri- (from περί (peri), meaning "near") and ap-, or apo- (from ἀπ(ό) (ap(ó)), meaning "away from") added to a reference to the thing being orbited.

A straight line connecting the pericenter and apocenter is the line of apsides. This is the major axis of the ellipse, its greatest diameter. For a two-body system the center of mass of the system lies on this line at one of the two foci of the ellipse. When one body is sufficiently larger than the other it may be taken to be at this focus. However whether or not this is the case, both bodies are in similar elliptical orbits each having one focus at the system's center of mass, with their respective lines of apsides being of length inversely proportional to their masses. Historically, in geocentric systems, apsides were measured from the center of the Earth. However, in the case of the Moon, the center of mass of the Earth–Moon system, or Earth–Moon barycenter, as the common focus of both the Moon's and Earth's orbits about each other, is about 74% of the way from Earth's center to its surface.

In orbital mechanics, the apsis technically refers to the distance measured between the centers of mass of the central and orbiting body. However, in the case of spacecraft, the family of terms are commonly used to refer to the orbital altitude of the spacecraft from the surface of the central body (assuming a constant, standard reference radius). 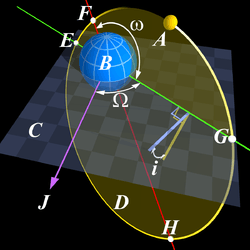 Keplerian orbital elements: point F is at the pericenter, point H is at the apocenter, and the red line between them is the line of apsides

These formulae characterize the pericenter and apocenter of an orbit:

Note that for conversion from heights above the surface to distances between an orbit and its primary, the radius of the central body has to be added, and conversely.

The geometric mean of the two limiting speeds is

The words "pericenter" and "apocenter" are often seen, although periapsis/apoapsis are preferred in technical usage.

Various related terms are used for other celestial objects. The '-gee', '-helion' and '-astron' and '-galacticon' forms are frequently used in the astronomical literature when referring to the Earth, Sun, stars and the Galactic Center respectively. The suffix '-jove' is occasionally used for Jupiter, while '-saturnium' has very rarely been used in the last 50 years for Saturn. The '-gee' form is commonly used as a generic 'closest approach to planet' term instead of specifically applying to the Earth. During the Apollo program, the terms pericynthion and apocynthion (referencing Cynthia, an alternative name for the Greek Moon goddess Artemis) were used when referring to the Moon.[3] Regarding black holes, the term peri/apomelasma (from a Greek root) was used by physicist Geoffrey A. Landis in 1998 before peri/aponigricon (from a Latin) appeared in the scientific literature in 2002.[4]

The following suffixes are added to peri- and apo- to form the terms for the nearest and farthest orbital distances from these objects.

Perihelion and aphelion of the Earth

For the orbit of the Earth around the Sun, the time of apsis is often expressed in terms of a time relative to seasons, since this determines the contribution of the elliptical orbit to seasonal variations. The variation of the seasons is primarily controlled by the annual cycle of the elevation angle of the Sun, which is a result of the tilt of the axis of the Earth measured from the plane of the ecliptic. The Earth's eccentricity and other orbital elements are not constant, but vary slowly due to the perturbing effects of the planets and other objects in the solar system. See Milankovitch cycles.

On a very long time scale, the dates of the perihelion and of the aphelion progress through the seasons, and they make one complete cycle in 22,000 to 26,000 years. There is a corresponding movement of the position of the stars as seen from Earth that is called the apsidal precession. (This is closely related to the precession of the axis.)

Astronomers commonly express the timing of perihelion relative to the vernal equinox not in terms of days and hours, but rather as an angle of orbital displacement, the so-called longitude of the pericenter. For the orbit of the Earth, this is called the longitude of perihelion, and in 2000 was about 282.895°. By the year 2010, this had advanced by a small fraction of a degree to about 283.067°.[5]

The dates and times of the perihelions and aphelions for several past and future years are listed in the following table:[6]

The following table shows the distances of the planets and dwarf planets from the Sun at their perihelion and aphelion.[7]

The following chart shows the range of distances of the planets, dwarf planets and Halley's Comet from the Sun.

Distances of selected bodies of the Solar System from the Sun. The left and right edges of each bar correspond to the perihelion and aphelion of the body, respectively, hence long bars denote high orbital eccentricity. The radius of the Sun is 0.7 million km, and the radius of Jupiter (the largest planet) is 0.07 million km, both too small to resolve on this image.

The images below show the perihelion (green dot) and aphelion (red dot) points of the inner and outer planets.