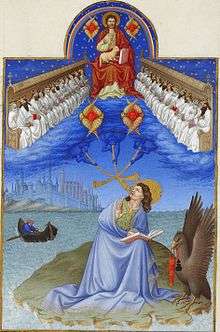 Revelation 5:8 presents the saints in heaven as linked by prayer with their fellow Christians on earth.

The communion of saints (Latin, communio sanctorum), when referred to persons, is the spiritual union of the members of the Christian Church, living and the dead, those on earth, in heaven, and, for those who believe in purgatory, those also who are in that state of purification.[1] They are all part of a single "mystical body", with Christ as the head, in which each member contributes to the good of all and shares in the welfare of all.

The earliest known use of this term to refer to the belief in a mystical bond uniting both the living and the dead in a confirmed hope and love is by Saint Nicetas of Remesiana (ca. 335–414); the term has since then played a central role in formulations of the Christian creed.[2] Belief in the communion of saints is affirmed in the Apostles' Creed.

The word "sanctorum" in the phrase "communio sanctorum" can also be understood as referring not to holy persons, but to holy things, namely the blessings that the holy persons share with each other, including their faith, the sacraments and the other spiritual graces and gifts they have as Christians.[3][4]

The doctrine of the communion of saints is based on 1 Corinthians 12, where Paul compares Christians to a single body. Bishops have the authority to lead a diocese.

The words translated into English as "saints" can refer to Christians, who, whatever their personal sanctity as individuals, are called holy because they are consecrated to God and Christ. This usage of the word "saints" is found some fifty times in the New Testament.

The Heidelberg Catechism defends this view, citing Romans 8:32, 1 Corinthians 6:17 and 1 John 1:3 to claim that all members of Christ have communion with him, and are recipients of all his gifts.

The persons who are linked in this communion include those who have died and whom Hebrews 12:1 pictures as a cloud of witnesses encompassing Christians on earth. In the same chapter, Hebrews 12:22-23 says Christians on earth "have come to Mount Zion, and to the city of the living God, the heavenly Jerusalem, and to innumerable angels in festal gathering, and to the assembly of the firstborn who are enrolled in heaven, and to a judge who is God of all, and to the spirits of just men made perfect."

In Catholic terminology, the communion of saints is thus said to comprise the church militant (those alive on earth), the church penitent (those undergoing purification in purgatory in preparation for heaven), and the church triumphant (those already in heaven). The damned are not a part of the communion of saints. The Roman Catholic Church, the Old Catholic Church, the Eastern Orthodox Church, the Oriental Orthodox Church, the Church of the East and some elements in the Anglican Communion point to this doctrine in support of their practice of asking the intercession of saints in heaven, whose prayers (cf. Revelation 5:8) are seen as helping their fellow Christians on earth.[5]

Roman Catholic and Orthodox churches refer to this doctrine in support of the practice of praying for the dead (as they interpret 2 Timothy 1:16-18). The Anglican tradition has been ambivalent about prayers for the dead historically, sometimes embracing and other times rejecting the practice.[6][7][8][9][10]

Protestantism, which rejects such doctrines as purgatory and the intercession of saints, necessarily has different definitions of the communion of saints. Martin Luther defined the phrase thus:

"The communion of saints." This is of one piece with the preceding ["the holy catholic church"]. Formerly it was not in the creed. When you hear the word "church," understand that it means group [Haufe], as we say in German, the Wittenberg group or congregation [Gemeine], that is, an holy, Christian group, assembly, or, in German, the holy, common church, and it is a word that should not be called "communion" [Gemeinschaft], but rather "a congregation" eine Gemeine. Someone wanted to explain the first term, "catholic church" [and added the words] communio sanctorum, which in German means a congregation of saints, that is, a congregation made up only of saints. "Christian church" and "congregation of saints" are one and the same thing.[11]

On Protestant views of the communion of saints, the Catholic Encyclopedia of 1908 wrote:

Sporadic errors against special points of the communion of saints are pointed out by the Synod of Gangra (Mansi, II, 1103), St. Cyril of Jerusalem (P.G., XXXIII, 1116), St. Epiphanius (ibid., XLII, 504), Asteritis Amasensis (ibid., XL, 332), and St. Jerome (P.L., XXIII, 362). From the forty-second proposition condemned, and the twenty-ninth question asked, by Martin V at Constance (Denzinger, nos. 518 and 573), we also know that Wyclif and Hus had gone far towards denying the dogma itself. But the communion of saints became a direct issue only at the time of the Reformation. The Lutheran churches, although commonly adopting the Apostles' Creed, still in their original confessions, either pass over in silence the communion of saints or explain it as the Church's "union with Jesus Christ in the one true faith" (Luther's Small Catechism), or as "the congregation of saints and true believers" (Augsburg Confession, ibid., III, 12), carefully excluding, if not the memory, at least the invocation of the saints, because Scripture "propoundeth unto us one Christ, the Mediator, Propitiatory, High-Priest, and Intercessor" (ibid., III, 26). The Reformed churches generally maintain the Lutheran identification of the communion of saints with the body of believers but do not limit its meaning to that body. Calvin (Inst. chret., IV, 1, 3) insists that the phrase of the Creed is more than a definition of the Church; it conveys the meaning of such a fellowship that whatever benefits God bestows upon the believers should mutually communicate to one another. That view is followed in the Heidelberg Catechism, emphasized in the Gallican Confession, wherein communion is made to mean the efforts of believers to mutually strengthen themselves in the fear of God. Both the Scotch and Second Helvetic Confessions bring together the Militant and the Triumphant Church, but whereas the former is silent on the signification of the fact, the latter says that they hold communion with each other: "nihilominus habent illae inter sese communionem, vel conjunctionem".

The double and often conflicting influence of Luther and Calvin, with a lingering memory of Catholic orthodoxy, is felt in the Anglican Confessions. On this point the Thirty-nine Articles are decidedly Lutheran, rejecting as they do "the Romish Doctrine concerning Purgatory, Pardons, Worshipping and Adoration as well of Images as of Relics, and also Invocation of Saints", because they see in it "a fond thing, vainly invented, and grounded upon no warranty of Scripture, but rather repugnant to the Word of God". On the other hand, the Westminster Confession, while ignoring the Suffering and the Triumphant Church, goes beyond the Calvinistic view and falls little short of the Catholic doctrine with regard to the faithful on earth, who, it says,, "being united to one another in love, have communion in each other's gifts and graces". In the United States, the Methodist Articles of Religion, 1784, as well as the Reformed Episcopal Articles of Religion, 1875, follow the teachings of the Thirty-nine Articles, whereas the teaching of the Westminster Confession is adopted in the Philadelphia Baptist Confession, 1688, and in the Confession of the Cumberland Presbyterian Church, 1829. Protestant theologians, just as Protestant confessions, waver between the Lutheran and the Calvinistic view.[1]