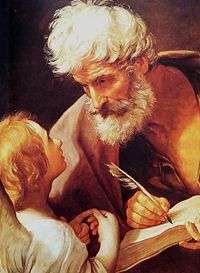 Saint Matthew the Apostle, depicted with an angel, is the patron saint of Salerno, Italy, bankers, and tax collectors.

A branch of Saint Honore Cake Shop, a Hong Kong chain bakery, in Hong Kong. Saint Honorius (Honoré) is the patron saint of bakers and confectioners.

A patron saint, patroness saint, patron hallow or heavenly protector is a saint who in Roman Catholicism and Eastern Orthodoxy is regarded as the heavenly advocate of a nation, place, craft, activity, class, clan, family or person.[1][2] Catholics believe that patron saints, having already transcended to the metaphysical, are able to intercede effectively for the needs of their special charges.[3]

Saints become the patrons of places where they were born or had been active. However, there were cases in Medieval Europe where a city which grew to prominence and transferred to its cathedral the remains or some relics of a famous saint who had lived and was buried elsewhere, and made him or her the city's patron saint – such a practice conferring considerable prestige on the city concerned. In Latin America and the Philippines, Spanish and Portuguese explorers often named a location for the saint on whose feast or commemoration they first visited the place, with that Saint naturally becoming the area's patron.

Professions sometimes have a patron saint owing to that individual being involved somewhat with it. Lacking such a saint, an occupation would have a patron whose acts or miracles in some way recall the profession. For example, when the previously unknown profession of photography appeared in the 19th century, Saint Veronica was made its patron, owing to how her veil miraculously received the imprint of Christ's face after she wiped the blood and sweat off. [4][5][6]

It is, however, generally discouraged in branches of Protestantism such as Calvinism, where the practice is considered a form of idolatry.[7]