Confidence-building measures (CBMs) or confidence- and security-building measures are actions taken to reduce fear of attack by both (or more) parties in a situation of tension with or without physical conflict. The term is most often used in the context of international politics, but is similar in logic to that of trust and interpersonal communication used to reduce conflictual situations among human individuals. CBMs emerged from attempts by the Cold War superpowers and their military alliances (the North Atlantic Treaty Organisation and the Warsaw Pact) to avoid nuclear war by accident or miscalculation. However, CBMs also exist at other levels of conflict situations, and in different regions of the world although they might not have been called CBMs.

Mathematically, this term assumes that a positive feedback model, where fear (and/or suspicion) of military attack or human rights violations is the positive feedback factor, is a valid model of the conflict. The actions which constitute confidence-building measures provide a negative feedback to the conflict, which weakens, or possibly cancels or reverses the tension which would otherwise grow exponentially and eventually turn into a war.

In international relations, the way that confidence-building measures are intended to reduce fear and suspicion (the positive feedbacks) is to make the different states' (or opposition groups') behaviour more predictable.

This typically involves exchanging information and making it possible to verify this information, especially information regarding armed forces and military equipment.

2. CBMs dealing with exchanges of information. Information may be exchanged, directly or through third parties, in the following categories:

a. Military budgets
b. New equipment and arms
c. Unit locations
d. Significant changes in a unit's size, equipment or mission
e. The major elements of strategic and tactical doctrine

3. CBMs dealing with exchanges of personnel. These personnel exchanges should be balanced in terms of numbers and duration, and could include:

a. Inviting observers to maneuvers, exercises and "out of garrison" activities. (The observers could be from neighboring states, from a third party neutral nation, or from an international organization).
b. Stationing permanent liaison observers at major headquarters. (As in a above, the observers could be from neighbors, neutrals, or international organizations).
c. Exchanging personnel as students or instructors at military academies, military schools, and war colleges.
d. Exchanging military attachés from all three services (land, sea, air). These attaché positions should be filled by highly qualified personnel, and not be used as "golden exiles" to get rid of officers who are politically undesirable.

4. CBMs dealing with the assembly, collation, and dissemination of data.

a. Set up demilitarized zones in sensitive border areas. Depending on the sensitivity of the area and the tensions between the two countries, certain types of weapons and units (e.g., armor, artillery) could be excluded from these areas.
b. Establish joint patrols in these areas (with or without the participation of other third party neutrals).
c. Establish fixed observation posts in these areas manned by neutrals and representatives from the two border nations.
d. Set up sensors (ground, tower, air, tethered aerostat) to supplement these patrols and observation posts.

6. CBMs dealing with actions which might be interpreted as provocative.

a. Direct ("hot line") communications systems should be established between heads of state, chiefs of military forces (defense ministers), general staffs, and units in contact across a border.
b. The use of coded military message traffic (on-line and off-line cryptography) should be limited.

a. Encourage visits by military athletic teams.
b. Encourage social and professional contacts through the attaché network and the various elements of the regional military system.

10. CBMs dealing with training and education.

a. Teach CBM approaches in national military academies, staff schools, and war colleges, as well as in the multinational military schools.
b. Apply CBM techniques in command post and field exercises.
c. Encourage the development of military trans-nationalism (i.e., a sense of military professionalism and mutual respect that transcends national boundaries).
d. Examine primary and secondary school curricula and texts for aggressive, hostile or false information on potential adversaries.

12. CBMs and functionalism. Certain functional areas of military-to-military cooperation should be assessed for their possible value as confidence-builders, even between adversary nations. These include: search and rescue (SAR) missions for aircraft and shipping; disaster relief; hurricane tracking; civic action; humanitarian projects.

a. Establish a regional or subregional mechanism, similar to the Conference on Security and Cooperation in Europe (CSCE) to study confidence-building measures and ways to improve and increase them.
b. Discuss CBMs at the periodic conferences of service chiefs.
c. Explore the possibility of extending CBMs geographically to other areas. In the Central American case to the Caribbean and South America.

Confidence-building measures between sovereign states have for many centuries also included the existence of and increased activities by embassies, which are state institutions geographically located inside the territory of other states, staffed by people expected to have extremely good interpersonal skills who can explain and resolve misunderstandings due to differences in language and culture which are incorrectly perceived as threatening, or encourage local knowledge of a foreign culture by funding artistic and cultural activities.

A much more grassroots form of confidence building occurs directly between ordinary people of different states. Short visits by individual children or groups of children to another state, and longer visits (6–12 months) by secondary and tertiary students to another state, have widely been used in the European Union as one of the methods of decreasing the tensions which had earlier led to many centuries of inter-European wars, culminating in the first and second world wars.

Validity of the model

If the feedback model assumed by the confidence-building measure mechanism is correct, then the rapidly developing improvement in communication between ordinary people by the internet should provide extremely robust, fast methods of information exchange and verification, as well as improved people-to-people contacts and general building of trust networks, reducing the intensity and frequency of wars. Evidence to date, however, suggests that the internet is as likely to inflame opinion and increase conflict (or at least tensions) as individuals are exposed to significantly different points of view.

Confidence Building Viewed As A Process

Confidence Building in the Arms Control Process: A Transformation View sees conventional understandings of confidence building as incomplete and focuses on why and how developing confidence-building arrangements can help to improve security relations. Confidence building, according to the transformation view, is a distinct activity undertaken by policy makers with the minimum intention of improving some aspects of a traditionally antagonistic security relationship through security policy coordination and cooperation. It entails the comprehensive process of exploring, negotiating, and then implementing tailored measures, including those that promote interaction, information exchange, and constraint. It also entails the development and use of both formal and informal practices and principles associated with the cooperative development of CBMs. When conditions are supportive, the confidence building process can facilitate, focus, synchronize, amplify, and generally structure the potential for a significant positive transformation in the security relations of participating states. Thus, the confidence-building process involves more than simply the production of a confidence building agreement and definitely should not be confused with what specific CBMs do.

The serious pursuit of legitimate confidence-building arrangements, according to the transformation view, is an activity that is particularly well-suited to fostering positive changes in security thinking (transformation) when conditions are supportive. This is due to the activity's fundamentally cooperative character and the reinforcing nature of the confidence-building measures that comprise an arrangement. Confidence building, because of its basic character, is able to facilitate and structure the potential for change in security relationships when at least some states are dissatisfied with, and beginning to question, status quo security policies and approaches.

A particularly important dimension of the transformation view is the proposition that the changes in security thinking facilitated by confidence building can become institutionalized as a collection of new rules and practices stipulating how participating states should cooperate and compete with each other in their security relationship. This restructured relationship redefines expectations of normal behaviour among participating states. Without at least a modest transformation of basic security expectations flowing from its application, it is difficult to see how confidence building can improve basic security relations in meaningful ways.

Confidence building appears to offer considerable promise as a security management approach. However, this potential cannot be fully realized unless a policy-relevant and conceptually sound understanding of the confidence-building process and how it works animates application efforts. Relying on the traditional "minimalist" accounts of confidence building, with their tendency to reify the operational content of confidence-building measures as the essence of "confidence building," is unlikely to provide much help. This latter approach does not speak to the conditions that should be in place for effective confidence building to occur and lacks a convincing account of why and how adopting these measures will improve security relations. (Text drawn from the executive summary of Confidence Building in the Arms Control Process: A Transformation View, with permission of the author and the Department of Foreign Affairs and International Trade.)

Confidence Building in Iraq and Afghanistan

Through trial and error, service members have learned that COIN and stabilization operations require confidence-building measures. For the counterinsurgent, the first critical factor required to build trust is the ability to understand the context of the situation fully. Cultural differences in education systems, religion, symbols, or behavioral norms could impede communication and the development of trust. As such, the counterinsurgent must always be aware of societal and cultural areas of sensitivity. Overall, the ability to understand underlying assumptions, past experiences, and the limiting factors of context will help set the stage for building trust.

The second critical factor is that it will take time. The time required to build trust can range from a few weeks to six months or more. With focused effort and regular interaction, trust typically forms at around the two- to- three-month mark. If the parties share significant risk, such as high levels of enemy contact, a strong bond of trust can form in a matter of weeks. 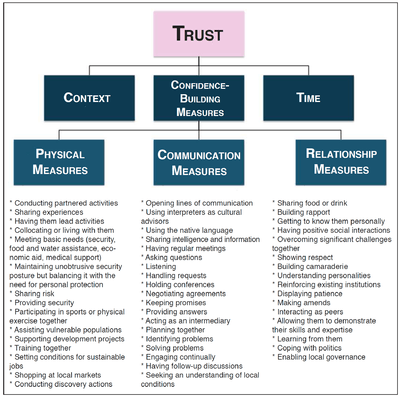 Model for building trust and confidence