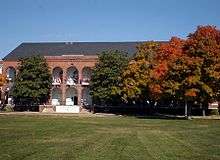 The IADC course provides a professionally oriented, multidisciplinary, graduate-level course of study. The eleven-month program provides senior military and government officials with a comprehensive understanding of governmental systems, the current international environment, structure and function of the Inter-American system, and an opportunity to study broad based security issues affecting the Hemisphere and the world. The development of these concentrations is accomplished through the detailed study of political, economic, psychosocial, and military factors of power. The College takes advantage of the educational and research facilities in the Washington D.C. area as well as external academic visits to the Americas. Faculty and students also engage in research and publishing. IADC students follow a demanding curriculum that includes seminars, daily briefings, travel abroad, and preparing a final monograph that charges each student to take a position on hot topics within the Western Hemisphere.

The IADC is unique in the Western Hemisphere in that the faculty and the student body are international. Broad international participation gives an unusual opportunity for the exchange of ideas and offers the foundation for better inter-American understanding. The extensive academic curriculum and close association of faculty and students representing a diversity of ideas and backgrounds fosters close professional and personal cooperation. Students and faculty share strong democratic values and a continuing commitment to strengthening democratic institutions in the Americas.

The IADC, located on Fort Lesley J. McNair, was formally opened on 9 October 1962 when the Honorable Dean Rusk, then Secretary of State of the United States, presented the building and furnishings donated by the United States Government. Doctor Jose A. Mora, then Secretary General of the Organization of American States, was the principal speaker at the opening ceremony. The first class, with 29 students representing 15 American republics, received their diplomas on 20 March 1963 with then Vice President of the United States, Lyndon B. Johnson, giving the graduation address and awarding diplomas.

Since its opening more than 2,000 students have graduated from the IADC, of which many have gone on to become presidents, cabinet ministers, ambassadors, or general officers for their respective nations. In January 2006, Class 37 graduate Michelle Bachelet was elected president of Chile, becoming the second IADC graduate to be elected to presidential office, after Lucio Gutiérrez of Ecuador.