For the music genre and ensemble, see Conga (music).
For other uses, see Conga (disambiguation).

A pair of congas 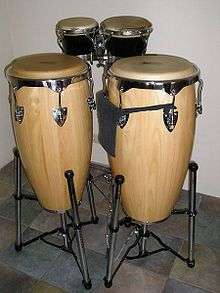 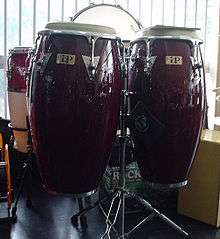 The conga, also known as tumbadora, is a tall, narrow, single-headed drum from Cuba. Congas are staved like barrels and classified into three types: quinto (lead drum, highest), tres dos or tres golpes (middle), and tumba or salidor (lowest). Congas are traditionally used in Afro-Cuban genres such as conga and rumba, although they are now very common in some other forms of Latin music, including descarga, Afro-Cuban jazz, salsa, songo, merengue and Latin rock.

Most modern congas have a staved wooden or fiberglass shell, and a screw-tensioned drumhead. They are usually played in sets of two to four with the fingers and palms of the hand. Typical congas stand approximately 75 centimetres (30 in) from the bottom of the shell to the head. The drums may be played while seated. Alternatively, the drums may be mounted on a rack or stand to permit the player to play while standing. While they originated in Cuba, their incorporation into the popular and folk music of other countries has resulted in diversification of terminology for the instruments and the players. In Cuba, congas are called tumbadoras.

Conga players are called congueros, while rumberos refers to those who dance following the path of the players. The term "conga" was popularized in the 1930s, when Latin music swept the United States. Cuban son and New York jazz fused together to create what was then termed mambo, but later became known as salsa. In that same period, the popularity of the Conga Line helped to spread this new term. Desi Arnaz also played a role in the popularization of conga drums. However, the drum he played (which everyone called a conga drum at the time) was similar to the type of drum known as bokú used in his hometown, Santiago de Cuba. The word conga came from the rhythm la conga used during carnaval (carnival) in Cuba. The drums used in carnaval could have been referred to as tambores de conga since they played the rhythm la conga, and thus translated into English as conga drums.

There are five basic strokes:

The moose call or glissando is done by rubbing the third finger, supported by the thumb, across the head of the drum. The finger is sometimes moistened with saliva or sweat, and sometimes a little coat of beeswax is put on the surface of the conga head to help make the sound.[1][2] The moose call is also done on the bongos.

To bend the pitch of the congas, a conguero sometimes uses his elbow to shift around on and apply pressure to different parts of the head; this causes the note to change. This is not a traditional stroke, but it is common in modern salsa and rumba.

Guaguancó used three congas. The smallest conga is the lead drum known as quinto. The following nine-measure quinto excerpt is from the guaguancó “La polémica” by Los Muñequitos de Matanzas (1988).[3] This passage moves between the main modes of playing (A,B,C). The A section is the basic lock or ride, as it is known in North America. It spans one clave (measure). An alternate phrase (B) is also one measure in length. Cross-beats, the basis of the third section (C), contradict the meter. By alternating between the lock and the cross, the quinto creates larger rhythmic phrases that expand and contract over several clave cycles. The great Los Muñequintos quintero Jesús Alfonso (1949–2009) described this phenomenon as a man getting “drunk at a party, going outside for a while, and then coming back inside.”[4] 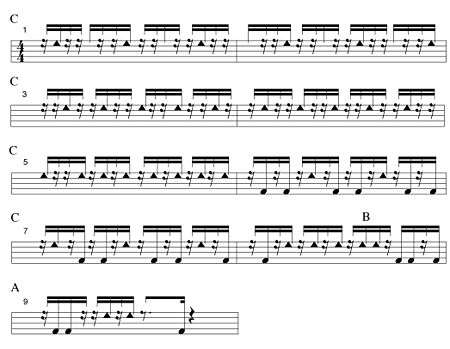 All modes of quinto in context. Quinto excerpt from “La polémica” by Los Muñequitos de Matanzas (1988).

The basic son montuno conga pattern is called marcha, or tumbao. The conga was first used in bands during the late 1930s, and became a staple of mambo bands of the 1940s. The primary strokes are sounded with open tones, on the last offbeats (2&, 2a) of a two-beat cycle. The fundamental accent—2& is referred to by some musicians as ponche.[5]

The basic tumbao sounds slaps (triangle noteheads) and open tones (regular noteheads) on the "and" offbeats.[6] There are many variations on the basic tumbao. For example, a very common variant sounds a single open tone with the third stroke of clave (ponche), and two tones preceding the three-side of clave. The specific alignment between clave and this tumbao is critical. 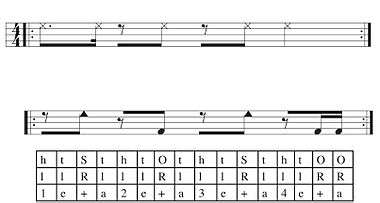 Another common variant uses two drums and sounds bombo (1a) on the tumba (3-side of the clave).[7] For example:

The conga marcha can be heard on countless recordings, including these:

There is also the bolero rhythm that is used for ballads. The conga part is similar to the marcha and can be heard on these recordings:

This relationship between the drums is derived from the style known as rumba. The feeling of the high drum part is like the quinto in rumba, constantly punctuating, coloring, and accenting, but not soloing until the appropriate moment (Santos 1985).[8]

In several songo arrangements, the tumbadora ('conga') part sounds the typical tumbao on the low-pitched drum, while replicating the quinto (lead drum) of guaguancó on the high-pitched drum. The quinto-like phrases can continually change, but they are based upon a specific counter-clave motif.[9] [See: "Songo Patterns on Congas" (Changuito).

Tomás Cruz developed several adaptions of folkloric rhythms when working in Paulito FG's timba band of the 1990s. Cruz's creations offered clever counterpoints to the bass and chorus. Many of his marchas span two or even four claves in duration, something very rarely done previously.[10] He also made more use of muted tones in his tumbaos, all the while advancing the development of . The example on the right is one of Cruz's inventos ('musical inventions'), a band adaptation of the Congolese-based Afro-Cuban folkloric rhythm makuta. He played the pattern on three congas on the Paulito song "Llamada anónima." Listen: "Llamada Anónima" by Paulito F.G.

Use in non-Cuban genres

The merengue rhythm, used in orchestral merengue, goes 1 2-1-2. It can also be heard as 1-2-1-2 1-2-1-2-1-2. Essentially, it is the rhythm of the tambora applied to conga. This can be heard on Elvis Crespo's Suavemente and Grupo Mania's Me Miras y Te Miro. In merengue tipico the rhythm is usually more complex and less standardized; it can range from simply hitting the conga on a fourth beat to playing full patterns that mark the time.

The rhythm of Palos is also representative of what we can call Afro-Dominican music. The drums are made out of hollowed-out tree trunks, and they are used both for secular and religious music in Santo Domingo and Haiti. The drums are called palos (alcahuete, palo mayor and adulon). The balsie is another drum played with both feet and hands. The player sits on it and uses a friction technique called arrugao. Panderos are also used in Dominican folk music, like congos, salve, and palos. The Dominican version of the 'clave' is 'la canoita', which are two sticks struck against each other, one with a handle. In the Gaga they also use palo drums and in the rhythm called Palo de Muerto, which is played when a member of the cofradia or brotherhood dies. The rhythm of palos is played throughout the Dominican Republic and is the national dance of the country. This music was suppressed and persecuted during Trujillo's rule due to social and racial discrimination.

There are many other kinds of rhythms for the conga. It is constantly applied in new genres of music, therefore taking up the rhythms of that specific style, such as punta, reggaeton, Brazilian forms such as samba and bossa nova, and even reggae, funk, go-go, and country music.

Conga drums are tunable to different notes. The original drums were tuned by adjusting knots and tension ropes on the drumhead, or, where the drum-heads were tacked or nailed to the top of the shell, by careful heating of the head. Modern congas use a screw-and-lug tension head system, which makes them easier to tune (or detune). This modern type of tension system is attributed to Carlos "Patato" Valdes, a popular Cuban Conguero. As was discussed above, terminology for the drums varies. Here, the naming system used is a composite of those mentioned before with those currently in use by major conga manufacturers. The drums are discussed in order from largest to smallest; the sizes of the drumheads given vary considerably by manufacturer, model, and style.

Congas are often tuned using the open tone (see above). In general, the particular note will depend on the make, model, and size of the conga drum. The drum should be tuned so that the bass tone resonates, the open tone rings, and the slap pierces through the musical mix. If the tuning is too loose, the bass and slap tones will sound "flabby"; too tight, and the drums will sound unnatural and "pinched". With a single drum, it is easy to tighten the drum until it makes a pleasing sound and then tighten a little more to reach a uniform desired pitch. It is very important to ensure that tuning is uniform around the drumhead, which can be checked by placing one finger pad in the center of the head and tapping the head near the edge above each lug location to detect any change, adjusting as necessary. Uniform tightness will help "let the drum speak".

Another important consideration is that head tension can greatly impact the ease or unease of the player, and generally a looser drumhead can lead to hand injury more than a tighter one, because a looser drumhead has less rebound and more muffling effect (hence potentially bruising joints and bones under spirited playing). Also, producing a crisp slap tone is nearly impossible on a loose head. During tuning it is suggested to "let the drum speak" and to conform tuning reasonably closely to the natural resonance (pitch) that the cavity of the drum interior presents. This resonance can be heard by singing or playing loud notes near the drum opening (this is true of tuning any drum) and noticing which pitch decays slowest - that will either be the fundamental (resonant) frequency or one of its simple overtones.

When two or more drums are used, there is the potential for more variation of which notes are chosen; however, tuning between or during compositions is rare in live performance. With only two drums, it is common to find them tuned a perfect fourth apart (the same interval used in "Here Comes the Bride") as is the tradition in western classical music for the timpani. Having three drums (typically the tumba, conga, and quinto) invites experimentation and individual customization. Some congueros like using the intervals of a major chord (e.g. F, A, C). Some players use the second inversion of a major chord (e.g. G, C, E); and some prefer a major second between the quinto and conga, with a perfect 4th descending to the tumba. Raul Rekow of Santana often plays five conga drums and tunes them to the opening phrase of a Latin tune.