An electronic drum, also known as digital drums or digital percussion, is a modern electronic musical instrument, a special type of synthesizer or sampler primarily designed to serve as an alternative to an acoustic drum kit or other percussion instruments. An electronic drum consists of an electronic or digital sound module which produces the synthesized or sampled percussion sounds and one or more electric sensors to trigger the sounds. Like regular drums, the sensors are struck by drum sticks or by the hands (depending on the type of drum pad) and they are played in a similar manner as an acoustic drum kit.

Strictly speaking, sequencers playing pre-programmed electronic drum tracks and electronic or digital drum machines are not electronic drums, because a drummer or other musician is not triggering the sounds.[1]

The electronic drum (pad/triggering device) is usually sold as part of an electronic drum kit, consisting of a set of drum pads mounted on a stand or rack in a configuration similar to that of an acoustic drum kit layout, with rubberized (Roland, Yamaha, Alesis, for example) or specialized acoustic/electronic cymbals (e.g. Zildjian's "Gen 16"). The drum pads themselves are either discs or shallow drum shells made of various materials, often with a rubber/silicone or cloth-like coated playing surface. Each pad has a sensor that generates an electric signal when struck.

The electric signal is transmitted through cables into an electronic or digital drum module ("brain" as it is sometimes called), synthesizer or other device, which then produces a sound associated with, and triggered by, the struck pad. The sound signal from the drum module can be plugged into a keyboard amp or PA system for use in a live band performance or listened to with headphones for silent practice. Since digital drums have become more popular, companies have started selling digital electronic drum files, referred to as drum kits. While electronic drum kits are typically used to trigger drum and percussion sounds, a MIDI-equipped electronic drum kit can be used to trigger any types of MIDI sounds, such as synthesized or sampled piano, guitar, or any other instrument.

In 1967, Felix Visser, a drummer playing with the Dutch pop band the VIPs, modified one of the pre-Roland-era Acetone electronic rhythm boxes, which was intended to play simple pre-programmed rhythms, so that it could be played as a live instrument. The Acetone rhythm box was designed by Ikutaro Kakehashi, who later founded Roland Corporation Japan. As with all rhythm boxes and later drum computers, before a "human feel" was developed by introducing subtle variation and "swing", the Acetone rhythm boxes had a metronomic, machine-like sound.

In Visser's modification, the Acetone box was extended with a large flat board holding 12 printed circuit boards of approximately 4 × 4 inches, with the copper traces intertwining like forks. The copper traces formed the touch surfaces for the sounds generated by the Acetone box. Each touch pad was sensed by an electronic circuit driving high-speed Siemens computer relays he found in surplus shops. These were connected to the drum and percussion sounds of the rhythm box. Although it was a crude way of playing electronic drum sounds by hand (like a percussionist playing bongos and congas), it worked and added a "human feel". Visser's approach enabled drummers to have new type of virtuosity (e.g., rolls on electronic bass drums could be played with sticks). The unit was used in Frans Peters' studio in radio city Hilversum, Netherlands.

The system was over-sensitive to humidity:

"The circuits would be triggered by the touch pads, merely by damp. Just breathing over them would do the job. So in the end a 40 Watt light bulb was built inside the box holding the pads, electronic circuitry and relays, to heat up the unit when the instrument had been sitting in a car and then put on a stage in a relatively warm, damp environment. After all we'd just left the dark ages of electronic music... "

The first electronic drum was created in the early 1970s by Graeme Edge, drummer of The Moody Blues, in collaboration with Sussex University Professor Brian Groves. The device was used in the song "Procession" from the 1971 album Every Good Boy Deserves Favour.[2]

Question - "One of the strangest pieces was 'Procession' (Every Good Boy Deserves Favor, 1971), which featured the pioneering work of Graeme Edge's electronic drum kit. How did that come about?"

Graeme - "I'd got in touch with the professor of electronics at Sussex University, Brian Groves. We worked up an electronic drum kit, a marvellous idea. I had the control panel in front of me, it's old hat now but we were the first to do it. There were pieces of rubber with silver paper on the back with a silver coil that moved up and down inside a magnet that produced a signal, so it was touch sensitive. I had 5 snares across the top and then ten tom-toms and then a whole octave of bass drums underneath my feet and then four lots of 16 sequencers, two on each side. There was a gap — to play a space — a tambourine, ebony stick, snare and three tom-toms. This was pre-chip days, back then you did it all with transistors. So it had something like 500 transistors. The electronic drums inside looked something like spaghetti. When it worked it was superb, but it was before its day, because it was so sensitive..."

The first commercial electronic drum was the Pollard Syndrum, released by Pollard Industries in 1976. It consisted of an electric sound generator and one or more drum pads. It quickly caught the attention of numerous high profile drummers/percussionists at the time, such as Carmine Appice and Terry Bozzio. However, the Syndrum was a financial failure and the company failed in the following years.[2]

In 1978, the Simmons company was created to produce commercial electronic drums sets. Its most notable product was the SDS-5, released in 1981. With its characteristic hexagon-shaped pads, the SDS-5 was first used by Richard James Burgess on From the Tea-rooms of Mars ...., "Chant No. 1" by Spandau Ballet, and "Angel Face" by Shock. After its debut on the top musical chart shows and parades, this electronic instrument garnered significant attention from established and influential rock/pop musicians. The sound of the SDS-5 is often described retrospectively with phrases such as "awful" or "sounded like trash can lids" by those who employed them at the time. Despite the critics, the distinctive Simmons sound was extensively used during the 1980s by pop/rock & synth-pop groups such as Duran Duran and progressive rock bands such as Rush, among others. Simmons drums are often viewed somewhat nostalgically by those who began to experiment with these early forays into electronic drums and percussion.

In the following years, other companies started selling their own versions of electronic drums, notably Roland and Yamaha. At that time, the electronic drums were similar to 2016-era starter or entry-level kits. They consisted of rubber-coated sensor pads mounted on stands. The pads were created to be velocity-sensitive and the sound was generated through single or multiple-layered sampling or synthesized sound.

In 1997, Roland introduced its TD-10 model, which had two important musical/electronic innovations. The first and more controversial innovation was its method of providing a sound for the drums/pads to trigger, instead of generating its sound by using samples of an acoustic drum or cymbal . The TD-10 used mathematical models to generate its sounds using synthesizers. While some drummers lamented the fact that the produced sound was not a "pure" sample of an acoustic sound, others felt that simple replication of an acoustic drum was not the goal. Secondly, instead of only providing rubber-coated pads, Roland featured a new mesh-like pad, produced in collaboration with acoustic drum skin manufacturer Remo.

The mesh-head pads look and feel approximately like a smaller-sized acoustic drum. The Remo/Roland mesh surface is made from a double layer of taut woven mesh fibers, fitted with several electronic sensors or triggers. The playing feel is close to that of striking an acoustic drum, but with more bounce than an acoustic skin. Roland termed its innovative commercial drum set "V-Drums", which later became the marketed brand name of its electronic drum line. Together, the mathematical/computational modeling, mesh-head pad surface and improved trigger sensor technology greatly increased the quality of sounds, volume levels in practice and live show settings and the "realistic" feel of electronic drums.[3] 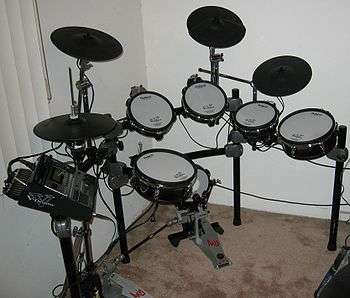 Newer drum kits from major manufacturers have therefore addressed many of the shortcomings of early electronic drum pads and modules. While each of the significant market brands have entry-level units, the professionally marketed kits are geared toward creating sounds and playing experiences that are nearly indistinguishable from playing a quality acoustic kit or world/orchestral percussion instruments. Examples of these high-end professional kits include the Yamaha DTX 950k and Roland V-Drums TD-30KV. Typically, these professional-level and studio kits are equipped with:

An acoustic triggered drum kit is a regular acoustic drum kit coupled with drum trigger/s (sensors) on the drums and cymbals. The triggers can be "built inside" or permanently fixed on to cymbals–so that they are necessarily either: fixed triggers (electronic kit essentially), removable (can be either acoustic or electronic by default of purpose at the time), or simply an acoustic kit that is now actually a "Hybrid" kit–using external triggers that attach to the rim and skin (or batter head) so as to trigger other sounds on top of the natural acoustic sound produced or simply to boost it for performance.

The triggers detect hits/ vibrations on the batter head and/or hoop rim and generate an electric signal. The signal is then sent to an electronic module/sampler or via cables and an Audio Interface to MIDI-DAW/drum software on a PC/laptop/Mac–to trigger the selected sounds. Usually, the "acoustic triggered kit" has either commercially-available mesh head "skins" (silent), or the drummer keeps her natural skins (using acoustic skins for a Hybrid kit are standard practice) and other muting accessories to reduce the acoustic sounds generated when played. This way, an acoustic (electro/acoustic) or Hybrid triggered drum kit has the feel and sizes of the standard acoustic kit but with the added benefits of an electronic kit's onstage silence, controllable volume (an important factor in small venues) or the added sound library available in 2016-era high-end kits, which includes sounds for large gongs and other instruments that are expensive and hard to transport in their original acoustic form. [5] A recent innovation is DrumsAnywhere software, which uses only a single piezoelectric microphone to trigger eight different drum pads on any flat or irregular surface.