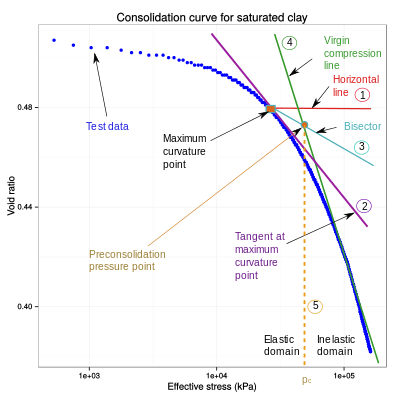 The experimentally determined consolidation curve (blue dots) for a saturated clay showing a procedure for computing the preconsolidation stress.

Consolidation is a process by which soils decrease in volume. According to Karl von Terzaghi "consolidation is any process which involves a decrease in water content of saturated soil without replacement of water by air." In general it is the process in which reduction in volume takes place by expulsion of water under long term static loads. It occurs when stress is applied to a soil that causes the soil particles to pack together more tightly, therefore reducing its bulk volume. When this occurs in a soil that is saturated with water, water will be squeezed out of the soil. The magnitude of consolidation can be predicted by many different methods. In the Classical Method, developed by Terzaghi, soils are tested with an oedometer test to determine their compression index. This can be used to predict the amount of consolidation.

When stress is removed from a consolidated soil, the soil will rebound, regaining some of the volume it had lost in the consolidation process. If the stress is reapplied, the soil will consolidate again along a recompression curve, defined by the recompression index. The soil which had its load removed is considered to be overconsolidated. This is the case for soils which have previously had glaciers on them. The highest stress that it has been subjected to is termed the preconsolidation stress. The over consolidation ratio or OCR is defined as the highest stress experienced divided by the current stress. A soil which is currently experiencing its highest stress is said to be normally consolidated and to have an OCR of one. A soil could be considered underconsolidated immediately after a new load is applied but before the excess pore water pressure has had time to dissipate.

The process of consolidation is often explained with an idealized system composed of a spring, a container with a hole in its cover, and water. In this system, the spring represents the compressibility or the structure of the soil itself, and the water which fills the container represents the pore water in the soil.

Secondary compression is given by the formula

The time for consolidation to occur can be predicted. Sometimes consolidation can take years. This is especially true in saturated clays because their hydraulic conductivity is extremely low, and this causes the water to take an exceptionally long time to drain out of the soil. While drainage is occurring, the pore water pressure is greater than normal because it is carrying part of the applied stress (as opposed to the soil particles).