In materials science, creep (sometimes called cold flow) is the tendency of a solid material to move slowly or deform permanently under the influence of mechanical stresses. It can occur as a result of long-term exposure to high levels of stress that are still below the yield strength of the material. Creep is more severe in materials that are subjected to heat for long periods, and generally increases as they near their melting point.

The rate of deformation is a function of the material properties, exposure time, exposure temperature and the applied structural load. Depending on the magnitude of the applied stress and its duration, the deformation may become so large that a component can no longer perform its function — for example creep of a turbine blade will cause the blade to contact the casing, resulting in the failure of the blade. Creep is usually of concern to engineers and metallurgists when evaluating components that operate under high stresses or high temperatures. Creep is a deformation mechanism that may or may not constitute a failure mode. For example, moderate creep in concrete is sometimes welcomed because it relieves tensile stresses that might otherwise lead to cracking.

Unlike brittle fracture, creep deformation does not occur suddenly upon the application of stress. Instead, strain accumulates as a result of long-term stress. Therefore, creep is a "time-dependent" deformation.

Strain as a function of time due to constant stress over an extended period for a viscoelastic material.

In the initial stage, or primary creep, the strain rate is relatively high, but slows with increasing time. This is due to work hardening. The strain rate eventually reaches a minimum and becomes near constant. This is due to the balance between work hardening and annealing (thermal softening). This stage is known as secondary or steady-state creep. This stage is the most understood. The characterized "creep strain rate" typically refers to the rate in this secondary stage. Stress dependence of this rate depends on the creep mechanism. In tertiary creep, the strain rate exponentially increases with stress because of necking phenomena or internal voiding decreases the effective area of the specimen. Fracture always occurs at the tertiary stage.

The mechanism of creep depends on temperature and stress. Various mechanisms are:

At high stresses (relative to the shear modulus), creep is controlled by the movement of dislocations. For dislocation creep, Q = Q(self diffusion), m = 4–6, and b = 0. Therefore, dislocation creep has a strong dependence on the applied stress and no grain size dependence.

Some alloys exhibit a very large stress exponent (n > 10), and this has typically been explained by introducing a "threshold stress," σth, below which creep can't be measured. The modified power law equation then becomes: 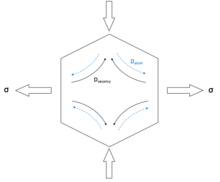 A diagram showing the diffusion of atoms and vacancies under Nabarro-Herring Creep.

Nabarro-Herring creep is strongly temperature dependent. For lattice diffusion of atoms to occur in a material, neighboring lattice sites or interstitial sites in the crystal structure must be free. A given atom must also overcome the energy barrier to move from its current site (it lies in an energetically favorable potential well) to the nearby vacant site (another potential well). The general form of the diffusion equation is D = D0exp(E/KT) where D0 has a dependence on both the attempted jump frequency and the number of nearest neighbor sites and the probability of the sites being vacant. Thus there is a double dependence upon temperature. At higher temperatures the diffusivity increases due to the direct temperature dependence of the equation, the increase in vacancies through Schottky defect formation, and an increase in the average energy of atoms in the material. Nabarro-Herring creep dominates at very high temperatures relative to a material's melting temperature.

Harper-Dorn creep is a climb-controlled dislocation mechanism at low stresses that has been observed in aluminum, lead, and tin systems, in addition to nonmetal systems such as ceramics and ice. It is characterized by two principal phenomena: a linear relationship between the steady-state strain rate and applied stress at a constant temperature, and an independent relationship between the steady-state strain rate and grain size for a provided temperature and applied stress. The latter observation implies that Harper-Dorn creep is controlled by dislocation movement; namely, since creep can occur by vacancy diffusion (Nabarro-Herring creep, Coble creep), grain boundary sliding, and/or dislocation movement, and since the first two mechanisms are grain-size dependent, Harper-Dorn creep must therefore be dislocation-motion dependent.[3]

is the diffusivity through the volume of the material,

is the shear modulus,

is the Burger's vector,

is the applied stress,

is Boltzmann's constant, and 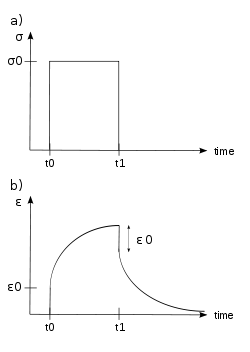 a) Applied stress and b) induced strain as functions of time over a short period for a viscoelastic material.

Creep can occur in polymers and metals which are considered viscoelastic materials. When a polymeric material is subjected to an abrupt force, the response can be modeled using the Kelvin-Voigt model. In this model, the material is represented by a Hookean spring and a Newtonian dashpot in parallel. The creep strain is given by the following convolution integral:

When subjected to a step constant stress, viscoelastic materials experience a time-dependent increase in strain. This phenomenon is known as viscoelastic creep.

Both polymers and metals can creep. Polymers experience significant creep at temperatures above ca. –200 °C; however, there are three main differences between polymeric and metallic creep.[9]

The creep of concrete, which originates from the calcium silicate hydrates (C-S-H) in the hardened Portland cement paste (which is the binder of mineral aggregates), is fundamentally different from the creep of metals as well as polymers. Unlike the creep of metals, it occurs at all stress levels and, within the service stress range, is linearly dependent on the stress if the pore water content is constant. Unlike the creep of polymers and metals, it exhibits multi-months aging, caused by chemical hardening due to hydration which stiffens the microstructure, and multi-year aging, caused by long-term relaxation of self-equilibrated micro-stresses in the nano-porous microstructure of the C-S-H. If concrete is fully dried it does not creep, though it is difficult to dry concrete fully without severe cracking. 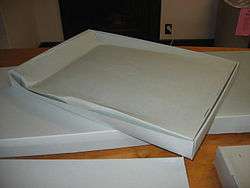 Creep on the underside of a cardboard box: a largely empty box was placed on a smaller box, and more boxes were placed on top of it. Due to the weight, the portions of the empty box not upheld by the lower support gradually deflected downward.

Though mostly due to the reduced yield strength at higher temperatures, the collapse of the World Trade Center was due in part to creep from increased temperature operation.[10]

The creep rate of hot pressure-loaded components in a nuclear reactor at power can be a significant design constraint, since the creep rate is enhanced by the flux of energetic particles.

Creep in epoxy anchor adhesive was blamed for the Big Dig tunnel ceiling collapse in Boston, Massachusetts that occurred in July 2006.[11]

The design of tungsten light bulb filaments attempts to reduce creep deformation. Sagging of the filament coil between its supports increases with time due to the weight of the filament itself. If too much deformation occurs, the adjacent turns of the coil touch one another, causing an electrical short and local overheating, which quickly leads to failure of the filament. The coil geometry and supports are therefore designed to limit the stresses caused by the weight of the filament, and a special tungsten alloy with small amounts of oxygen trapped in the crystallite grain boundaries is used to slow the rate of Coble creep.

Creep can cause gradual cut-through of wire insulation, especially when stress is concentrated by pressing insulated wire against a sharp edge or corner. Special creep-resistant insulations such as Kynar (polyvinylidene fluoride) are used in wirewrap applications to resist cut-through due to the sharp corners of wire wrap terminals. Teflon insulation is resistant to elevated temperatures and has other desirable properties, but is notoriously vulnerable to cold-flow cut-through failures caused by creep.

In steam turbine power plants, pipes carry steam at high temperatures (566 °C (1,051 °F)) and pressures (above 24.1 MPa or 3500 psi). In jet engines, temperatures can reach up to 1,400 °C (2,550 °F) and initiate creep deformation in even advanced-design coated turbine blades. Hence, it is crucial for correct functionality to understand the creep deformation behavior of materials.

Creep deformation is important not only in systems where high temperatures are endured such as nuclear power plants, jet engines and heat exchangers, but also in the design of many everyday objects. For example, metal paper clips are stronger than plastic ones because plastics creep at room temperatures. Aging glass windows are often erroneously used as an example of this phenomenon: measurable creep would only occur at temperatures above the glass transition temperature around 500 °C (932 °F). While glass does exhibit creep under the right conditions, apparent sagging in old windows may instead be a consequence of obsolete manufacturing processes, such as that used to create crown glass, which resulted in inconsistent thickness.[12][13]

Nimonic 75 has been certified by the European Union as a standard creep reference material.[15]

There are four general ways to prevent creep in metal. One way is to use higher melting temperature metals. The second way is to use materials with greater grain size. The third way is to use alloying. Finally, the last way is to use intelligent design to reduce the possible factors of creep.