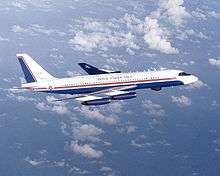 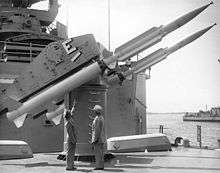 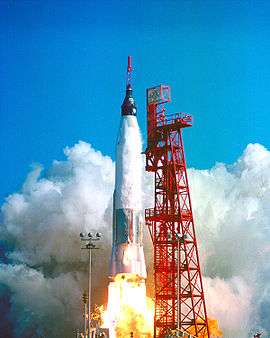 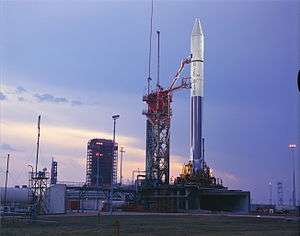 Convair was an American aircraft manufacturing company which later expanded into rockets and spacecraft. The company was formed in 1943 by the merger of Consolidated Aircraft and Vultee Aircraft, and went on to produce aircraft such as the Convair B-36 bomber, the F-102 Delta Dagger, the F-106 Delta Dart, the B-58 Hustler bomber plus the Convair 880 and Convair 990 jet airliners. It also manufactured the first Atlas rockets, including the rockets that were used for the manned orbital flights of Project Mercury. The company's subsequent Atlas-Centaur design continued this success and derivatives of the design remain in use as of 2010. In 1994 most of the company's divisions were sold by then-owners General Dynamics to McDonnell Douglas and Lockheed, with the remaining components deactivated in 1996.

The Consolidated Vultee Aircraft Corporation, whose name was in the course of time changed to Convair, was an American aircraft, rocket, and spacecraft company for the design, development, and manufacturing of aerospace products. It existed as a company from 1943 until 1994, although the Consolidated Aircraft company existed before that, and Consolidated produced important aircraft in the early years of World War II, especially the B-24 Liberator heavy bomber and the PBY Catalina seaplane for the U.S. Navy, the Royal Canadian Air Force, the British flying forces, and others. The Catalina remained in production through May 1945, and more than 4,000 were built. What was soon to be called "Convair" (first unofficially, and then officially), was created in 1943 by the merger of the Consolidated Aircraft Company and the Vultee Aircraft Company. This merger produced a large airplane company, ranked fourth among United States corporations by value of wartime production contracts, higher than the giants like Douglas Aircraft, Boeing, and Lockheed.[1] Convair always had most of its research, design, and manufacturing operations in San Diego County of Southern California, and nearby counties, though other locations were involved as well.

After the beginning of the Jet Age of military fighters and bombers, Convair was a pioneer of the delta-winged aircraft design, along with the French Dassault aircraft company, which designed and built the Mirage fighter planes.

One of Convair's most famous products was the ten-engined Convair B-36 strategic bomber, burning four turbojets and turning six pusher propellers driven by Pratt & Whitney R-4360 Wasp Major radial piston engines. The Convair B-36 was the largest landbased piston engined bomber in the world. The Atlas missile, the F-102 Delta Dagger and F-106 Delta Dart delta-winged interceptors, and the delta-winged B-58 Hustler supersonic intercontinental nuclear bomber were all Convair products. For a period of time in the 1960s, Convair manufactured its own line of jet commercial airliners, the Convair 880 and Convair 990, but this did not turn out to be a profitable business. However, Convair found that it was profitable to become an aviation subcontractor and to manufacture large subsections of airliners, such as fuselages for the larger airliner companies, McDonnell Douglas, Boeing, and Lockheed. The Convair Division produced its own airplane designs, such as several airliners, until 1965, when it shifted from these to airframe/aerostructure subcontracting projects for other companies.

In the 1950s Convair shifted money and effort into its missile and rocket projects, producing the Terrier missile ship-launched surface-to-air system for the U.S. Navy during the 1960s and 1970s. Convair's Atlas rocket was originally developed in 1957 as an ICBM for the U.S. Air Force. It was replaced in 1962 by the room-temperature liquid-fueled Titan II missile and the solid-fueled Minuteman missile. The Atlas rocket transitioned into a civilian launch vehicle and was used for the first orbital manned U.S. space flights during Project Mercury in 1962 and 1963.

The Atlas rocket became a very reliable booster for launching of satellites and continued to evolve, remaining in use into the 21st century, when combined with the Centaur upper stage to form the Atlas-Centaur rocket for launching geosynchronous communication satellites and space probes. The Centaur rocket was also designed, developed, and produced by Convair, and it was the first widely used outer space rocket to use the all-cryogenic fuel-oxidizer combination of liquid hydrogen and liquid oxygen. The use of this liquid hydrogen – liquid oxygen combination in the Centaur was an important direct precursor to the use of the same fuel-oxidizer combination in the Saturn S-II second stage and the Saturn S-IVB third stage of the gigantic Saturn V moon rocket of the Apollo project. The S-IVB had earlier also been used as the second stage of the smaller Saturn IB rocket, such as the one which was used to launch Apollo 7. The Centaur upper stage was first designed and developed for launching the Surveyor lunar landers, beginning in 1966, to augment the delta-V of the Atlas rockets and give them enough payload capability to deliver the required mass of the Surveyors to the Moon.

More than 100 Convair-produced Atlas-Centaur rockets (including those with their successor designations) were used to successfully launch over 100 satellites, and among their many other outer-space missions, they launched the Pioneer 10 and Pioneer 11 space probes, the first two to be launched on trajectories that carried them out of the Solar System.

In addition to aircraft, missiles and space vehicles, Convair developed the large Charactron vacuum tubes, which were the precursors of modern cathode ray tube (CRT) computer displays,[3] and to give an example of a minor product, the CORDIC algorithms, which is widely used today to calculate trigonometric functions in calculators, field-programmable gate arrays, and other small electronic systems.

In 1994, the General Dynamics Corporation split and sold the original Convair Division, along with other General Dynamics aerospace units that had been swept into it over the decades. The airframe/aerostructures manufacturing company and the space boosters company (both mostly in California) were sold to the McDonnell Douglas Corporation. The Fort Worth, Texas factory and its associated engineering locations and laboratories – which had been previously used for the manufacture of hundreds of General Dynamics F-111 Aardvark fighter-bombers and F-16 Fighting Falcon fighters for the U.S. Air Force, along with dozens of smaller projects – were sold, along with all intellectual property and the legal rights to the products that were being designed and built within, to the Lockheed Corporation. In 1996, General Dynamics deactivated all of the remaining legal entities of the Convair Division.

Convair B-36 Peacemaker, which used both piston and jet engines in later versions 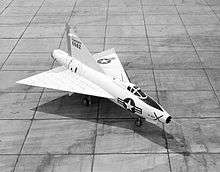 The Convair XF-92A was the USA's first delta wing aircraft

Convair B-58 Hustler. This aircraft set transcontinental speed record 03/05/62 by flying nonstop from Los Angeles to New York and back again

In the former designation system that the Navy and the Marine Corps used, a final letter of "Y" identified a Convair or a Consolidated product, such as the PBY-5 flying boat.

"Convair Drive" at the Toronto Pearson International Airport is believed to be named for the Convair company.