In number theory, two integers a and b are said to be relatively prime, mutually prime, or coprime (also spelled co-prime)[1] if the only positive integer that divides both of them is 1. That is, the only common positive factor of the two numbers is 1. This is equivalent to their greatest common divisor being 1.[2] The numerator and denominator of a reduced fraction are coprime. In addition to

is sometimes used to indicate that a and b are relatively prime.[3]

A fast way to determine whether two numbers are coprime is given by the Euclidean algorithm.

The number of integers coprime to a positive integer n, between 1 and n, is given by Euler's totient function (or Euler's phi function) φ(n).

A number of conditions are individually equivalent to a and b being coprime:

As a consequence of the third point, if a and b are coprime and br ≡ bs (mod a), then r ≡ s (mod a). That is, we may "divide by b" when working modulo a. Furthermore, if b1 and b2 are both coprime with a, then so is their product b1b2 (modulo a it is a product of invertible elements, and therefore invertible); this also follows from the first point by Euclid's lemma, which states that if a prime number p divides a product bc, then p divides at least one of the factors b, c.

As a consequence of the first point, if a and b are coprime, then so are any powers ak and bl.

If a and b are coprime and a divides the product bc, then a divides c. This can be viewed as a generalization of Euclid's lemma. 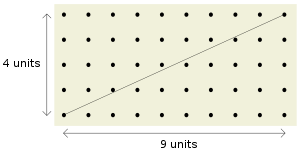 Figure 1. The numbers 4 and 9 are coprime. Therefore, the diagonal of a 4 x 9 lattice does not intersect any other lattice points

The two integers a and b are coprime if and only if the point with coordinates (a, b) in a Cartesian coordinate system is "visible" from the origin (0,0), in the sense that there is no point with integer coordinates on the line segment between the origin and (a, b). (See figure 1.)

In a sense that can be made precise, the probability that two randomly chosen integers are coprime is 6/π2 (see pi), which is about 61%. See below.

A set of integers S = {a1, a2, .... an} can also be called coprime or setwise coprime if the greatest common divisor of all the elements of the set is 1. For example, the integers 6, 10, 15 are coprime because 1 is the only positive integer that divides all of them.

The concept of pairwise coprimality is important as a hypothesis in many results in number theory, such as the Chinese remainder theorem.

It is possible for an infinite set of integers to be pairwise coprime. Notable examples include the set of all prime numbers, the set of elements in Sylvester's sequence, and the set of all Fermat numbers.

Two ideals A and B in the commutative ring R are called coprime (or comaximal) if A + B = R. This generalizes Bézout's identity: with this definition, two principal ideals (a) and (b) in the ring of integers Z are coprime if and only if a and b are coprime. If the ideals A and B of R are coprime, then AB = A∩B; furthermore, if C is a third ideal such that A contains BC, then A contains C. The Chinese remainder theorem can be generalized to any commutative ring, using coprime ideals.

Informally, the probability that any number is divisible by a prime (or in fact any integer)

; for example, every 7th integer is divisible by 7. Hence the probability that two numbers are both divisible by p is

, and the probability that at least one of them is not is

. Any finite collection of divisibility events associated to distinct primes is mutually independent. For example, in the case of two events, a number is divisible by primes p and q if and only if it is divisible by pq; the latter event has probability 1/pq. If one makes the heuristic assumption that such reasoning can be extended to infinitely many divisibility events, one is led to guess that the probability that two numbers are coprime is given by a product over all primes,

Here ζ refers to the Riemann zeta function, the identity relating the product over primes to ζ(2) is an example of an Euler product, and the evaluation of ζ(2) as π2/6 is the Basel problem, solved by Leonhard Euler in 1735.

are coprime. Although PN will never equal

exactly, with work[4] one can show that in the limit as

More generally, the probability of k randomly chosen integers being coprime is 1/ζ(k). 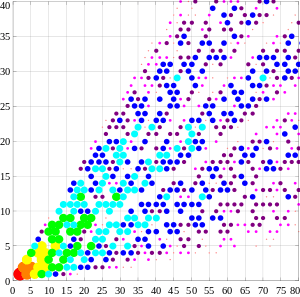 The order of generation of coprime pairs by this algorithm. First node (2,1) is marked red, its three children are shown in orange, third generation is yellow, and so on in the rainbow order.

All pairs of positive coprime numbers

) can be arranged in two disjoint complete ternary trees, one tree starting from

(for even-odd and odd-even pairs),[5] and the other tree starting from

(for odd-odd pairs).[6] The children of each vertex

are generated as follows:

This scheme is exhaustive and non-redundant with no invalid members.