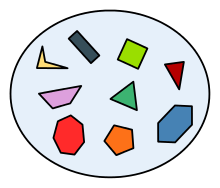 A set of polygons in a Venn diagram

In mathematics, a set is a well-defined collection of distinct objects, considered as an object in its own right. For example, the numbers 2, 4, and 6 are distinct objects when considered separately, but when they are considered collectively they form a single set of size three, written {2,4,6}. Sets are one of the most fundamental concepts in mathematics. Developed at the end of the 19th century, set theory is now a ubiquitous part of mathematics, and can be used as a foundation from which nearly all of mathematics can be derived. In mathematics education, elementary topics such as Venn diagrams are taught at a young age, while more advanced concepts are taught as part of a university degree. The German word Menge, rendered as "set" in English, was coined by Bernard Bolzano in his work The Paradoxes of the Infinite.

A set is a well-defined collection of distinct objects. The objects that make up a set (also known as the elements or members of a set) can be anything: numbers, people, letters of the alphabet, other sets, and so on. Georg Cantor, the founder of set theory, gave the following definition of a set at the beginning of his Beiträge zur Begründung der transfiniten Mengenlehre:[1]

A set is a gathering together into a whole of definite, distinct objects of our perception [Anschauung] or of our thought—which are called elements of the set.

Sets are conventionally denoted with capital letters. Sets A and B are equal if and only if they have precisely the same elements.[2]

Cantor's definition turned out to be inadequate; instead, the notion of a "set" is taken as a primitive notion in axiomatic set theory, and the properties of sets are defined by a collection of axioms. The most basic properties are that a set can have elements, and that two sets are equal (one and the same) if and only if every element of each set is an element of the other; this property is called the extensionality of sets.

There are two ways of describing, or specifying the members of, a set. One way is by intensional definition, using a rule or semantic description:

A is the set whose members are the first four positive integers.
B is the set of colors of the French flag.

The second way is by extension – that is, listing each member of the set. An extensional definition is denoted by enclosing the list of members in curly brackets:

One often has the choice of specifying a set either intensionally or extensionally. In the examples above, for instance, A = C and B = D.

There are two important points to note about sets. First, in an extensional definition, a set member can be listed two or more times, for example, {11, 6, 6}. However, per extensionality, two definitions of sets which differ only in that one of the definitions lists set members multiple times, define, in fact, the same set. Hence, the set {11, 6, 6} is exactly identical to the set {11, 6}. The second important point is that the order in which the elements of a set are listed is irrelevant (unlike for a sequence or tuple). We can illustrate these two important points with an example:

For sets with many elements, the enumeration of members can be abbreviated. For instance, the set of the first thousand positive integers may be specified extensionally as

where the ellipsis ("...") indicates that the list continues in the obvious way. Ellipses may also be used where sets have infinitely many members. Thus the set of positive even numbers can be written as {2, 4, 6, 8, ... }.

The notation with braces may also be used in an intensional specification of a set. In this usage, the braces have the meaning "the set of all ...". So, E = {playing card suits} is the set whose four members are ♠, ♦, ♥, and ♣. A more general form of this is set-builder notation, through which, for instance, the set F of the twenty smallest integers that are four less than perfect squares can be denoted

In this notation, the colon (":") means "such that", and the description can be interpreted as "F is the set of all numbers of the form n2 − 4, such that n is a whole number in the range from 0 to 19 inclusive." Sometimes the vertical bar ("|") is used instead of the colon.

If every member of set A is also a member of set B, then A is said to be a subset of B, written A ⊆ B (also pronounced A is contained in B). Equivalently, we can write B ⊇ A, read as B is a superset of A, B includes A, or B contains A. The relationship between sets established by ⊆ is called inclusion or containment. 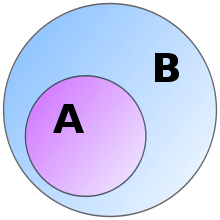 A is a subset of B

An obvious but useful identity, which can often be used to show that two seemingly different sets are equal:

A partition of a set S is a set of nonempty subsets of S such that every element x in S is in exactly one of these subsets.

The power set of a finite set with n elements has 2n elements. This relationship is one of the reasons for the terminology power set. For example, the set {1, 2, 3} contains three elements, and the power set shown above contains 23 = 8 elements.

Every partition of a set S is a subset of the powerset of S.

There is a unique set with no members and zero cardinality, which is called the empty set (or the null set) and is denoted by the symbol ∅ (other notations are used; see empty set). For example, the set of all three-sided squares has zero members and thus is the empty set. Though it may seem trivial, the empty set, like the number zero, is important in mathematics; indeed, the existence of this set is one of the fundamental concepts of axiomatic set theory.

There are some sets that hold great mathematical importance and are referred to with such regularity that they have acquired special names and notational conventions to identify them. One of these is the empty set, denoted {} or ∅. Another is the unit set {x}, which contains exactly one element, namely x.[2] Many of these sets are represented using blackboard bold or bold typeface. Special sets of numbers include

Positive and negative sets are denoted by a superscript - or +. For example, ℚ+ represents the set of positive rational numbers.

Each of the above sets of numbers has an infinite number of elements, and each can be considered to be a proper subset of the sets listed below it. The primes are used less frequently than the others outside of number theory and related fields.

There are several fundamental operations for constructing new sets from given sets. 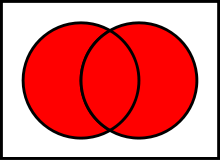 The union of A and B, denoted A ∪ B
Main article: Union (set theory)

Two sets can be "added" together. The union of A and B, denoted by A ∪ B, is the set of all things that are members of either A or B.

Some basic properties of unions:

A new set can also be constructed by determining which members two sets have "in common". The intersection of A and B, denoted by A ∩ B, is the set of all things that are members of both A and B. If A ∩ B = ∅, then A and B are said to be disjoint. 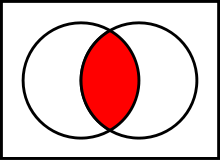 The intersection of A and B, denoted A ∩ B.

Some basic properties of intersections: 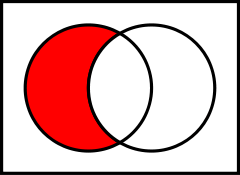 The relative complementof B in A 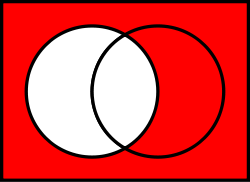 The complement of A in U 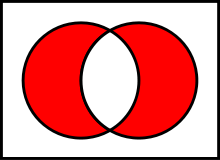 The symmetric difference of A and B
Main article: Complement (set theory)

Two sets can also be "subtracted". The relative complement of B in A (also called the set-theoretic difference of A and B), denoted by A \ B (or A − B), is the set of all elements that are members of A but not members of B. Note that it is valid to "subtract" members of a set that are not in the set, such as removing the element green from the set {1, 2, 3}; doing so has no effect.

In certain settings all sets under discussion are considered to be subsets of a given universal set U. In such cases, U \ A is called the absolute complement or simply complement of A, and is denoted by A′.

Some basic properties of complements:

An extension of the complement is the symmetric difference, defined for sets A, B as

Some basic properties of Cartesian products:

Set theory is seen as the foundation from which virtually all of mathematics can be derived. For example, structures in abstract algebra, such as groups, fields and rings, are sets closed under one or more operations.

One of the main applications of naive set theory is constructing relations. A relation from a domain A to a codomain B is a subset of the Cartesian product A × B. Given this concept, we are quick to see that the set F of all ordered pairs (x, x2), where x is real, is quite familiar. It has a domain set R and a codomain set that is also R, because the set of all squares is subset of the set of all reals. If placed in functional notation, this relation becomes f(x) = x2. The reason these two are equivalent is for any given value, y that the function is defined for, its corresponding ordered pair, (y, y2) is a member of the set F.

Although initially naive set theory, which defines a set merely as any well-defined collection, was well accepted, it soon ran into several obstacles. It was found that this definition spawned several paradoxes, most notably:

For most purposes however, naive set theory is still useful.

Principle of inclusion and exclusion

This principle gives us the cardinality of the union of sets.

If A and B are any two sets then,